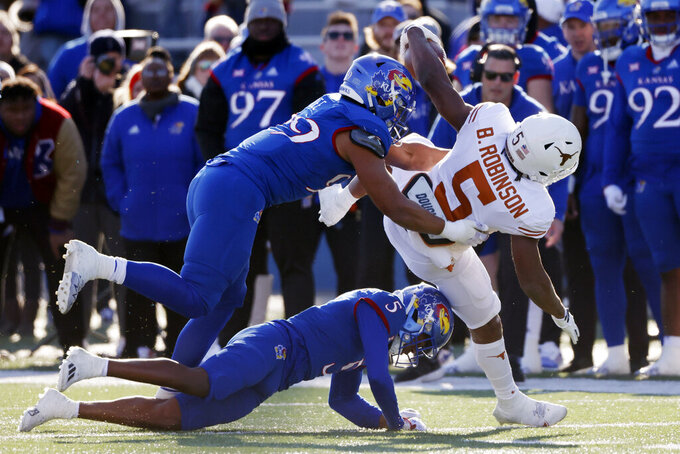 Texas running back Bijan Robinson (5) rushes for a first down as Kansas defensive lineman Malcolm Lee (99) and safety O.J. Burroughs (5) make the stop during the first quarter of an NCAA college football game on Saturday, Nov. 19, 2022, in Lawrence, Kan. (AP Photo/Colin E. Braley)

MANHATTAN, Kan. (AP) — Kansas State will know before its rivalry game Saturday whether it needs to beat Kansas for a 14th consecutive time to earn a rematch with TCU in the Big 12 championship game.

If Baylor can knock off Texas on Friday, the No. 15 Wildcats will have their spot in Arlington.

Otherwise, a conference title will hinge upon the Wildcats beating the Jayhawks on Saturday night in a matchup that figures to be tougher for Kansas State than previous iterations.

“We’ve got to control what we can control,” Klieman said. “That’s what we’re worried about.”

The Wildcats have reached the Big 12 title game twice, most recently beating Oklahoma in 2003 before the game went on a six-year hiatus. They shared the conference championship with the Sooners in 2012, but have not stood alone atop the league since Bill Snyder was roaming the sidelines.

That was long before Klieman or Kansas counterpart Lance Leipold arrived on the scene.

“It’s going to be a fun one, it’s going to be a wild one,” said Kansas State defensive end Brendon Mott, the Big 12′s defensive player of the week after piling up three sacks against West Virginia. “We need a good week of preparation."

There is plenty at stake for Kansas, too.

The Jayhawks already are bowl-eligible for the first time since 2008, when Mark Mangino went to the Insight Bowl in his penultimate season. But they've lost five of their past six games, including a 55-14 roughhousing at the hands of Texas last weekend, and Leipold knows the importance of finishing the season on a high note for a program still building.

“It's about us playing well and showing that we're taking steps,” said Leipold, whose name has been linked to open jobs at Nebraska and Wisconsin. “You look at what (Kansas State) did all year, and what they've done — it's a chance to knock off another ranked opponent, and do it on the road, and give us a shot of energy as we head into bowl prep.”

It's also a chance for Kansas to make the Sunflower Showdown a rivalry again.

The two schools have been playing since 1902 and every year since 1911, making it the fifth-longest continuous series in any division of college football. Yet despite the Jayhawks holding a commanding advantage in the series, it has tilted wildly toward Kansas State ever since the late 1980s. The Wildcats won 11 straight games beginning in 1993, and their current streak of 13 straight has included plenty of lopsided scores.

That includes the 35-10 drubbing that they handed Kansas last season.

Kansas State running back Deuce Vaughn, the Big 12's fourth-leading rusher with 1,148 yards, was a nightmare for the Jayhawks last season. He ran for 162 yards and three touchdowns. He'll be facing a Kansas run defense that gave up 243 yards and four TD runs to the Longhorns' Bijan Robinson last weekend.

Jayhawks quarterback Jalon Daniels struggled early against Texas after missing six weeks with a shoulder injury, but the one-time national revelation played well down the stretch. In fact, Leipold said he wanted to sit Daniels in the third quarter of the blowout loss to Texas, but Daniels lobbied to keep playing so that he could knock off some more rust.

There was a time this season when Kansas State pondered redshirting Will Howard, who was pressed into service when Adrian Martinez got hurt against TCU. But he's played so well that any talk of setting him down has ceased.

Kansas running back Devin Neal ran for 224 yards and a touchdown against Oklahoma State before piling up 190 yards in a loss to Texas Tech. But he was held to just 51 yards by Texas, and his 3.9 per carry was nearly half his season average.