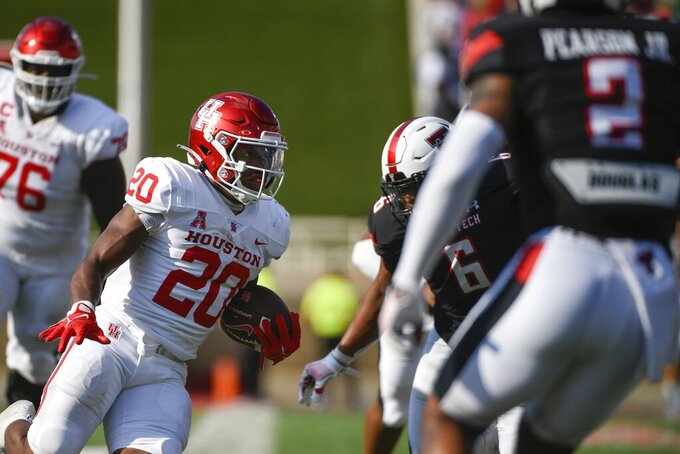 Houston running back Brandon Campbell (20) runs the ball against Texas Tech during the second half of an NCAA college football game Saturday, Sept. 10, 2022, in Lubbock, Texas. (AP Photo/Justin Rex)

Line: Houston by 10 ½, according to FanDuel Sportsbook.

Kansas, 2-0 for the first time since 2011 and are fourth in the nation in scoring 52.5 points a game, will try and continue its early success in a visit to Houston. The Cougars look to rebound after dropping a 33-30 two overtime thriller at Texas Tech last week.

Kansas: CB Cobee Bryant sealed the team’s 55-42 win over West Virginia last week with an interception return for a touchdown. It was his second touchdown of the year after he returned a blocked field goal for a score in the opener against Tennessee Tech.

Houston: DL Derek Parish set an American Athletic Conference record against the Red Raiders with 6 ½ tackles for losses and 4 ½ sacks. The 4 ½ sacks rank third in school history and are the most by a Cougar since 1990.

These teams last met in the Fort Worth Bowl in 2005 when the Jayhawks won 42-13. ... Kansas leads the nation in third-down conversions (17 of 23 chances). ... QB Jalon Daniels threw for 219 yards and three touchdowns last week. He has at least one TD pass in six straight games. ... The Jayhawks have 10 rushing touchdowns and average more than 7.5 yards a carry. ... LB Rich Miller had the second double-digit tackle game of his career with 12 last week. ... The Cougars have played five overtime periods in their first two games. ... Houston has won a school-record seven straight home openers dating to 2015. ... The Cougars have scored 10 or more points in 100 straight games and at least 21 points in 42 consecutive regular-season games. ... QB Clayton Tune has thrown for 472 yards with four touchdowns and one interception this season. ... WR Nathaniel Dell leads the team with 12 receptions for 170 yards and two touchdowns.