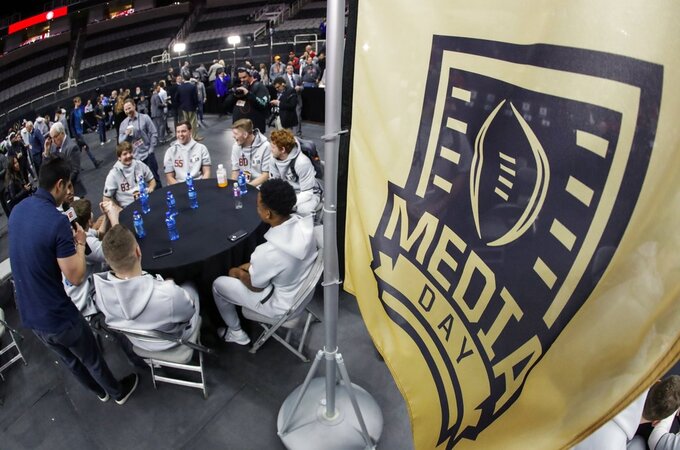 Alabama linebacker Christian Miller is questionable for Monday night's College Football Playoff national championship game against No. 2 Clemson because of a pulled hamstring.

Crimson Tide coach Nick Saban said Miller has not been able to do much work in practice.

"We'll sort of see what he can do today and sort of further evaluate his circumstance and see if he can be effective enough to contribute in a game," Saban said.

Miller plays strong side outside linebacker, a spot where the Tide has lost several players, including Terrell Lewis. If Miller can't play, it should open up more opportunities for senior James Mosley and freshman Eyabi Anoma. Miller is second on the team with 8 1/2 sacks.

Before heading to the national championship game, Clemson coach Dabo Swinney had some good news for three of his lesser-known players.

Swinney awarded scholarships to walk-ons Carter Groomes, Regan Upshaw and Austin Jackson, carrying on the Tigers' tradition of rewarding those who put in the time and effort to help the team during the week, without the hope of getting a whole lot of actual playing time.

Swinney called the team together before a New Year's Eve practice to announce his newest scholarship players. Groomes says he'll "never forget that moment" and praised his coach for being "willing to offer that opportunity to walk-ons."

Clemson's most famous walk-on is receiver Hunter Renfro, who caught the winning touchdown pass in the national championship game two years ago. He is closing out his career on Monday as one of the Tigers' biggest weapons.

But Scott said he doesn't see himself leaving Clemson for another coordinator job.

Tony Elliot is the primary play caller for the Tigers, but Scott says his involvement in the offense gives him experience in that area, too.

"The way that we're set up offensively, is really split during between Tony and myself," he said.

Alabama offensive coordinator Mike Locksley is not sleeping much these days.

Locksley is the latest Alabama assistant to coach in the College Football Playoff after accepting a job to be head coach at another school.

Locksley was hired by Maryland last month. He is recruiting for the Terps and trying to hire staff.

He does that at 10 p.m. when he's done for the day with Alabama.

Out in California this week, he's been getting up at 3:30 am to juggle both jobs.

Jeremy Pruitt did it last year when he took over at Tennessee.

Kirby Smart and Lane Kiffin have also held two jobs at once during their time at Alabama.

"I owe it to these players and this team." Locksley said.

Alabama quarterback Jalen Hurts is ready to do whatever he can to help the Crimson Tide defeat Clemson in the national championship game.

He's not ready, however, to talk about his future at Alabama.

Hurts is a junior who started his first two seasons, but was backup to Southeastern Conference player of the year Tua Tagovailoa this season.

Hurts has stayed prepared and engaged on the bench, coming in when called on by coach Nick Saban, most notably in the SEC Championship game last month against Georgia after Tagovailoa hurt his ankle.

"I want to play as much as I can" Monday night, Hurts said.

But when asked whether he'll remain at Alabama for his senior season, transfer or try for the NFL, Hurts quickly turned away and walked off.

Tagovailoa, a sophomore, is expected to continue as Crimson Tide quarterback, seemingly leaving little space for Hurts, who took Alabama to the national championship game in each of his first two seasons.

"I can only say we're continuing to get better," Tagovailoa said at media day on Saturday. "It's trying to maintain the feeling of it feeling good. Just one more game then I can rest."

Tagovailoa has surgery on his sprained ankle after he injured it against Georgia in the SEC title game. He has been receiving almost nonstop treatment on his ankle since.

Offensive coordinator Mike Locksley said Tagovailoa, who also dealt with a knee injury this season, was as healthy as he has been in months.

"I thought last week we saw him healthy," Locksley said.