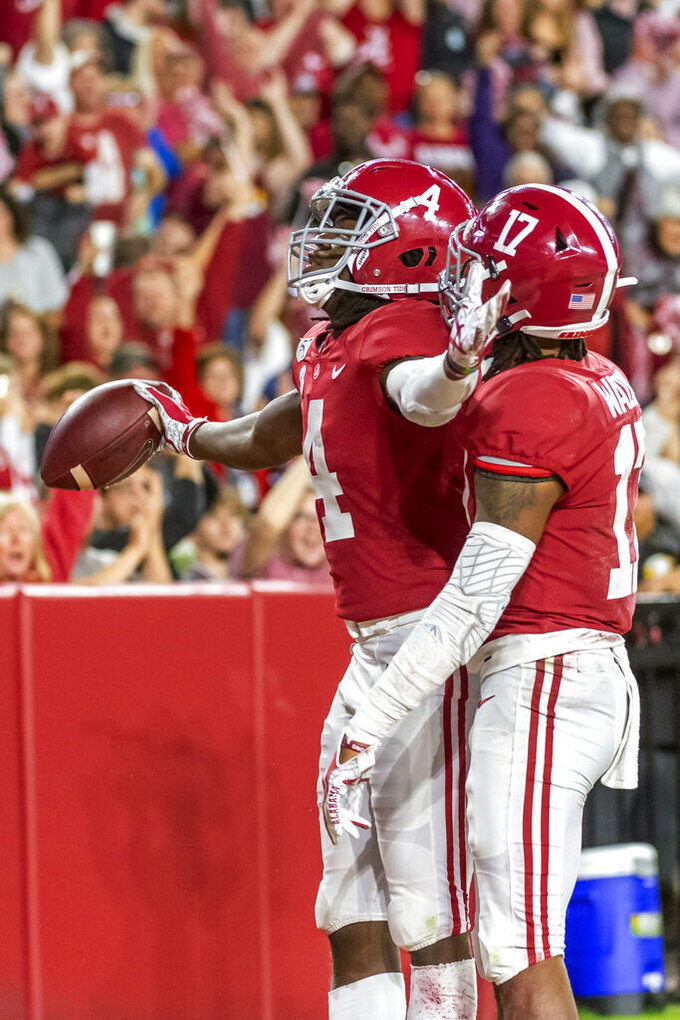 Alabama wide receiver Jerry Jeudy (4) acknowledges the crowd as Alabama wide receiver Jaylen Waddle (17) celebrates with him following a touchdown reception during the second half of an NCAA college football game against Arkansas, Saturday, Oct. 26, 2019, in Tuscaloosa, Ala. (AP Photo/Vasha Hunt)

TUSCALOOSA, Ala. (AP) — Forget the Heisman, maybe quarterbacks Joe Burrow and Tua Tagovailoa can settle the question of who has the better wide receivers.

No. 1 LSU's Burrow and No. 2 Alabama's Tagovailoa both could make a strong case going into Saturday's game.

In other words, it's two of the best collections of receivers in college football with Heisman Trophy-caliber quarterbacks throwing to them.

Fulton called them "the top two receiving corps in the country." They're certainly among the most prolific with receivers who are projected as potential first-round picks, led by Alabama's Jeudy and Ruggs and LSU's Jefferson.

Unlike Beckham and Landry, who have had NFL seasons that aren't too far away from their LSU career numbers, these groups have been piling up catches, yards and touchdowns all season.

They're huge beneficiaries of a dramatic shift in offensive philosophies, just like Burrow and Tagovailoa.

"They have a lot of guys who can make plays on offense, which makes it very challenging for you on defense," Alabama coach Nick Saban said.

He was speaking of LSU, but the same could be said for 'Bama.

The receivers are as likely to put up 100-yard games as the running backs, a big departure from past Alabama and LSU teams.

The SEC's top four receivers in yards per game and half of the Top 10 will be on the field at Bryant-Denny Stadium.

Chase and Jefferson are 1 and 2, followed by Smith and Jeudy. Chase, Jefferson and Smith all have nine touchdown catches, and Jeudy has eight.

Jefferson is tied for the Southeastern Conference lead in catches per game with South Carolina's Bryan Edwards, averaging 6.9. Next up is Jeudy, last year's Biletnikoff Award winner, followed by Chase.

"They have a really good receiving corps," Jeudy said. "They make a lot of plays. They have four receivers who know how to make plays and are great with the ball in their hands."

Both groups of receivers have had some monster games among them:

—Smith had 11 catches for a school-record 274 yards and SEC record-tying five touchdowns against Mississippi.

—Chase had 10 catches for 229 yards and four touchdowns against Vanderbilt .

—Jeudy just got his third 100-yard game, along with two touchdowns, against Arkansas.

Alabama's Jaylen Waddle is a playmaker often overshadowed by the three upperclassmen. Tight end Miller Forristall is out with a throat/voice box injury.

The Tigers also have a threat in tight end Thaddeus Moss while running back Clyde Edwards-Helaire has 19 catches. Marshall has seven touchdown catches despite missing three games with a foot injury.

"When we have the receivers that we do and then we have Clyde and Thad in the passing game, you've got to pick your poison," Burrow said. "We've got five guys on the field that can make you pay if you don't cover them."

Then again, so does Alabama.