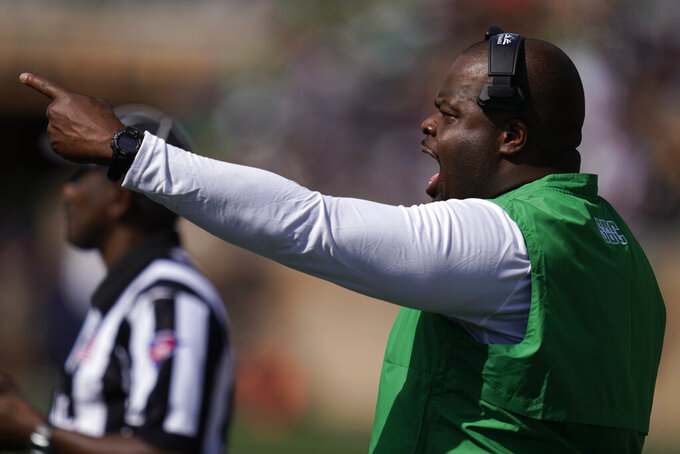 Marshall head coach Charles Huff yells to his team as they play against Notre Dame during the first half of an NCAA college football game in South Bend, Ind., Saturday, Sept. 10, 2022. (AP Photo/Michael Conroy)

SOUTH BEND, Ind. (AP) — Notre Dame fans could live with the Fighting Irish being overpowered in the fourth quarter against then-No. 2 Ohio State. Being pushed around by Marshall is a different story.

Notre Dame Stadium is supposed to be a place to shake down the thunder, not where the Thundering Herd celebrate a 26-21 victory.

The eighth-ranked Irish led 15-12 when Tyler Buchner ran in for a 1-yard run to open the fourth quarter Saturday, then added a 2-point conversion. It all went downhill from there for Notre Dame (0-2). Marcus Freeman is now the first Irish coach to open his career 0-3.

Freeman, the 36-year-old, first-time head coach, was asked whether his inexperience coaching was a factor in the poor start.

“If it’s my experience as head coach, and I don’t know if that’s a reason why, or the lack of execution? But it starts with me, right? It starts with me as the head coach and looking at myself and saying, ‘What do I have to do to help this football team and really look at everything we’re doing?’ Because the performance isn’t where we needed to be,” he said.

Steven Gilmore returned an interception 37 yards for a touchdown late in the fourth quarter and Khalan Labron ran for 163 yards as Marshall shocked the Irish. Gilmore, the brother of Stephon Gilmore of the Indianapolis Colts, picked off a pass by Tyler Buchner with 4:35 left, raced to the end zone and then jumped into the stands where Marshall fans were already celebrating the victory.

Marshall (2-0), the first Sun Belt Conference team to play at Notre Dame Stadium, beat a team ranked in the top 10 for just the second time in school history. The Thundering Herd beat No. 6 Kansas State 27-20 in 2003.

Huff tried to downplay the significance of the win.

“In house, no disrespect to Notre Dame, in house, we expected it. Because we talked about this summer being a team that expects to win every time we touch the field,” Huff said.

Freeman, who was promoted from defensive coordinator after Brian Kelly left for LSU, had lost a bowl game to Oklahoma State and at Ohio State last week. This one will go down much differently.

The Irish had a streak of 42 straight wins against unranked opponents snapped. Freeman also said after the game Buchner was replaced in the closing minutes because of a shoulder injury. He said he didn't know how severe it was.

The Herd took a 19-15 lead with 5:16 remaining when Henry Colombi completed a 3-yard touchdown pass to Devin Miller to cap that 94-yard drive. The score was set up by a 42-yard run by Laborn, who broke a tackle at the line of scrimmage and juked Irish safety Brandon Joseph before breaking free.

Any hope for a comeback by the Irish (0-2) ended when Owen Porter intercepted a pass by backup Irish quarterback Drew Pyne with three minutes remaining. Pyne threw a TD pass with 14 second left to cut the lead to five points.

The Irish, who struggled offensively a week earlier in a 21-10 loss to Ohio State with a play-it-safe, ball-control game plan, opened the playbook against the Herd but still struggled to get much going.

Buchner was 18-of-32 passing for 201 yards with two interceptions. Buchner also led the Irish in rushing with 44 yards on 13 carries, Michael Mayer had eight catches for 103 yards.

Freeman said it's time for self-examination.

“I just told the team that we all have to look at ourselves, starting with the head coach on down and say, ‘Okay, what do I have to do? What do we have to do to fix the issues that we’re having, and not just focus on the end result.’ We have to look at the lack of executions in all phases of our team and where we can improve that,” Freeman said.

Marshall: Huff, a former Alabama and Penn State assistant, assembled a roster heavy on Power Five transfers such as Labron from Florida State for the school’s first season in the Sun Belt. It paid off with one of the biggest victories in school history.

Notre Dame: The Irish offense showed it still has a lot of work to do, and the honeymoon period for Freeman is probably over.

Freeman said the Irish can't allow an opponent to drive 94 yards for a touchdown like the Herd did to take a 19-15 lead.

“The biggest thing was the lack of tackling. It’s too many times where, run or pass, we didn’t get the ball carrier down. You can’t let an offense drive it 95 yards at any moment, but especially not in the fourth quarter when the game’s on the line and you’re up and you’re trying to put the game away," he said.

Freeman is the first Notre Dame coach to open his career 0-3. Kelly opened his stint with the Irish 1-2 and lost three of his first four. The last Irish coach to open with two straight losses was Lou Holtz in 1986, opening his career 1-4.

Freeman might have been a bit too confident before the game.

“There’s no better place in this country to get our first win of this new era but here at Notre Dame Stadium,” Freeman said to fans before the game.

The respect the Irish gained by playing Ohio State won't be enough to overcome this poor showing.

Marshall: The Thundering Herd play at Bowling Green on Saturday, their first meeting since 2010.

Notre Dame: The Irish will wear green jerseys when they host Cal on Saturday. It will be the first time the Irish have worn green since 2018. The Irish were 4-0 wearing green during the Brian Kelly era — and will be looking to snap a three-game losing streak in them this time.