Maryland's Demus out for the season with knee injury 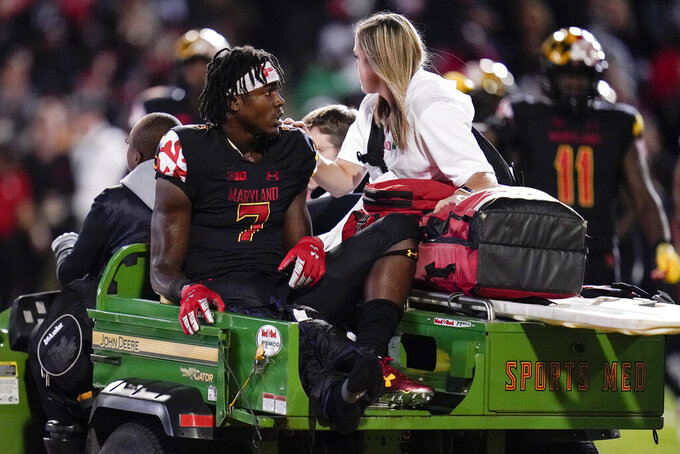 Now the news is even worse for the Terrapins.

Demus, the Big Ten's leader in yards receiving, is expected to miss the rest of the season, coach Michael Locksley said Tuesday.

“Dontay is out — season-ending knee surgery here this week,” Locksley said. “Obviously very devastating for a player that I felt was playing at a very high level.”

Demus was hurt early in the second quarter while returning a kickoff. The Terps ended up being outscored 31-0 in that period on their way to a 51-14 loss Friday. Demus' fumble on that kickoff was one of seven Maryland turnovers on the night.

“A 31-point differential in the second quarter kind of tells the story, and it kind of took place after one of our emotional leaders of our team was injured,” Locksley said. “It's got to be a next-man-up mentality. I thought when Dontay went out, obviously the fumble on that play is what started our downward spiral there in the second quarter.”

The path forward doesn't get any easier for Maryland, which plays at No. 7 Ohio State this weekend.

Even after missing most of Friday's game, Demus is atop the Big Ten with 507 yards receiving. Maryland has two other players in the top 25 in Rakim Jarrett and Jeshaun Jones, so there's productive depth that could help the Terrapins withstand the loss of Demus.

Maryland is averaging 317.4 yards passing per game, the second-best mark in the league behind Ohio State. Quarterback Taulia Tagovailoa was impressive as the Terps won their first four games of the season, but then he was intercepted five times against Iowa.

“I just tried to do too much," Tagovailoa said. “That's something that I can learn from, just taking what the defense gives me.”

“I'm sure Dontay will do everything he can, as he said going up into the tunnel, to come back — whether it's here at Maryland or hopefully at the next level,” Locksley said.

The Terrapins, meanwhile, will have to move on without him and resume what a week ago looked like a pretty promising season. Jarrett has already caught four touchdown passes in 2021. Maryland has six players — not including Demus — with 10 catches this season.

Demus, however, was a leader among the receiving group, and he'll be hard to replace.

“He just brought all of the energy, he was like the vocal guy, he was the most experienced," Jarrett said. "He led by example, how he went out and practiced every day, to how he carried himself off the field. He was a pro guy.”

The Terrapins fell flat in their big opportunity last week. In front of an excited home crowd against a top-five opponent, they were routed. They'll have a chance to make up for it if they can be competitive against Ohio State this weekend, but now there are real questions about what the Terps' season will look like after that — and whether they can overcome the loss of a key player.

Based on what Maryland did the first four games of the season, there are more winnable games on the schedule, but Tagovailoa and the passing game now have some adversity to recover from.

“I think we're a better team than what we showed on Friday night," Locksley said. "There's no doubt about that. We're sitting here 4-1 after five games, so I don't think there's a need for us to panic.”