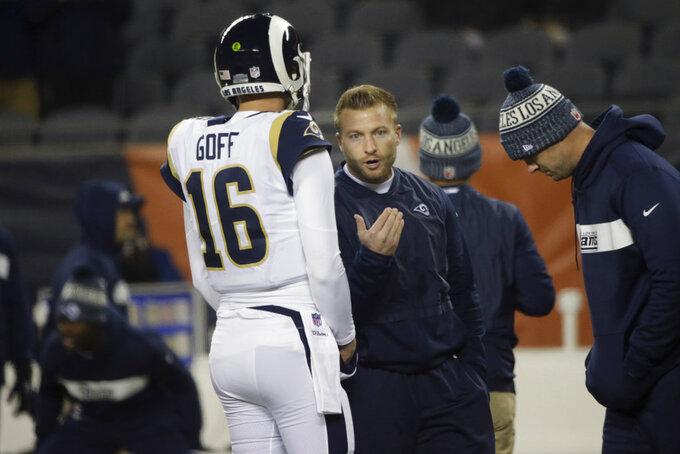 THOUSAND OAKS, Calif. (AP) — Nearly everything has gone according to plan for Los Angeles Rams coach Sean McVay and his offense over the past two seasons.

Coming off the Rams' worst offensive performance of his tenure, a 15-6 loss at the Chicago Bears on Sunday, McVay is looking forward to seeing how his team responds in another prime-time game against the Philadelphia Eagles.

"These are great opportunities to really be what you say," McVay said Monday night. "It's easy to always talk about those things when things go well, but when you truly get tested or when you go through real setbacks and small adversities and how you handle that often defines what kind of team that you are and what kind of leader you are, and we certainly expect to respond the right way as a team."

McVay didn't have much new to say after reviewing the film and reflecting on a game in which the Rams had 214 yards, gained 3.5 yards per play and failed to score a touchdown for the first time with the 32-year-old offensive savant calling plays.

Instead, McVay again blamed himself for putting the offense in difficult situations because of his decisions and praised the excellent play of the Bears' defense.

One of the more glaring errors McVay said he made was not getting running back Todd Gurley enough touches. Gurley had 11 carries for 28 yards and three receptions for 30 yards. The 14 touches were his fewest under McVay, and the 58 yards from scrimmage was the third-lowest total for Gurley over the past two seasons.

"For us, offensively, certainly when the ball is in Todd's hands good things happen," McVay said. "That's something that in hindsight I certainly wish I would have (made) a lot of different selections yesterday, and those are things I have to learn from too."

The Rams were unable to find a consistent rhythm on offense, which McVay blamed on a lack of success on first down that forced quarterback Jared Goff to have to throw against the Bears' strong pass rush led by outside linebacker Khalil Mack.

Goff was 20 of 44 for 180 yards, no touchdowns and four interceptions, but McVay rejected the idea that cold weather was responsible for the poor performance.

"To say that it's as easy to throw it in those conditions, I don't think would be accurate, but I don't think that's the reason why we didn't play as well offensively," McVay said.

What little good news there was for the offense came with McVay declaring center John Sullivan and left guard Rodger Saffold were able to avoid serious injury against Chicago. Sullivan was examined for a concussion, and Saffold hurt his ankle.

The Rams (11-2) are still in position to secure a first-round playoff bye. Getting home-field advantage throughout the NFC playoffs is still a possibility, but the Rams would need the New Orleans Saints to lose another game. The Saints (11-2) hold the tiebreaker because of the Rams' 45-35 loss at New Orleans in Week 9.

McVay said there is no added emphasis on hosting the NFC championship game.

"We know that what's important for us is to even have those conversations and for that to be a potential possibility for us, we've got to go take care with what we can control and that's getting ready for the Philadelphia Eagles and the defending world champs right now," McVay said. "And that's exactly what we're doing."

NOTES: CB Dominique Hatfield is out for the season and will need surgery to repair an ankle injury he sustained against Chicago. ... OLB Trevon Young will be signed to the active roster off the practice squad, McVay said. Young, a rookie who was drafted in the sixth round, has played in two games.