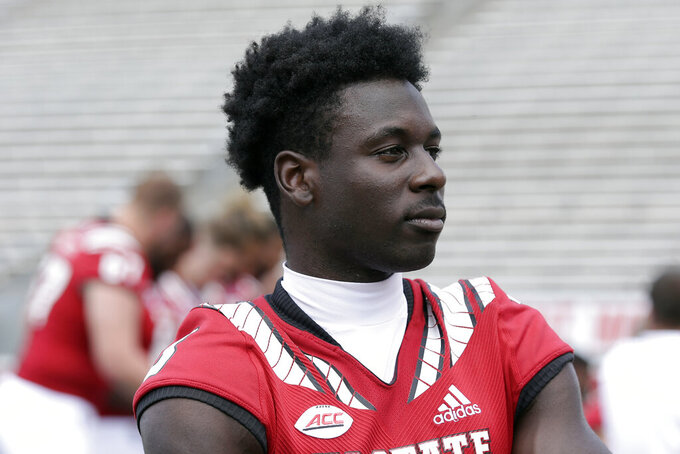 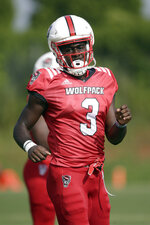 The Wolfpack lost top receivers Kelvin Harmon and Jakobi Meyers — both ranked among the Atlantic Coast Conference's leaders in multiple categories — to the NFL. Now Dave Doeren's squad is looking at whether Emeka Emezie and the rest of the supporting cast are ready to handle those vacant leading roles.

"You're taking two guys out of the offense who each had 80-plus balls and 1,000-plus-yard seasons," redshirt sophomore receiver Thayer Thomas said Sunday during the team's preseason media day. "Those have got to go somewhere. ... (Receivers coach George McDonald) is expecting us to take on a lot, but I think we're all ready for it."

N.C. State certainly needs the receivers to be ready considering all the offensive changes for the Aug. 31 opener against East Carolina.

Quarterback Ryan Finley is in the NFL after three years as a starter, leaving an uncertain position battle through preseason camp. Top rusher Reggie Gallaspy (1,091 yards and 18 touchdowns) is also gone, while offensive coordinator Eli Drinkwitz left to become the head coach at Appalachian State.

The departures of Harmon and Meyers have left a huge hole, too.

They were big receivers who presented challenges all over the field. Harmon did his best work making tough contested catches, while Meyers took a major step from converted quarterback to bona fide receiver with a knack for getting open all the time.

Between them, they had the three highest catch totals for any ACC team last year: Harmon's 15 catches against Wake Forest, followed by Meyers' 14 catches against James Madison and 13 against East Carolina.

The most likely candidate to take the lead is Emezie, a 6-foot-3, 210-pound junior who had some strong games of his own as the team's No. 3 target while finishing with 616 yards receiving. He's even switched from jersey No. 86 to take Harmon's No. 3 this year.

Doeren praised Emezie's willingness to learn from Harmon and Meyers last year, and said Sunday he's shaken off an introverted nature to take a more outspoken leadership role among the receivers.

"I'm proud of him," Doeren said. "Standing up in front of a group and talking is something that he would never have done two years ago. ... I think he's @ a lot different place mentally right now, where he can do that. The players look up to him. They really do, because of how hard he works and how serious it is to him."

Behind Emezie is Thomas (34 catches for 383 yards and three touchdowns), redshirt junior C.J. Riley (28 catches for 315 yards and two touchdowns) and graduate transfer Tabari Hines — who had played previously at Oregon and Wake Forest.

N.C. State will need all of them, too, to replace what was lost.

"It definitely shows us the blueprint of how to be successful here," Riley said of Harmon and Meyers. "We watched them work, we watched them play. ... We've just got to follow their steps."