No. 1 Georgia looks to avoid letdown vs. Mississippi State 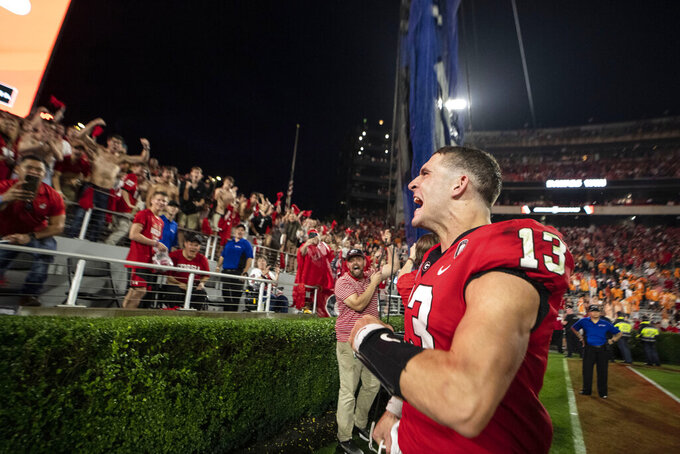 Georgia took control of the East Division and snatched the No. 1 spot in the College Football Playoff rankings with its 27-13 win over then-No. 2 Tennessee. They look to stay atop the CFP rankings and AP Top 25 in the battle of the Bulldogs. Mississippi State escaped Auburn 39-33 in overtime after leading big and is bowl eligible. It seeks its first win over the top-ranked team since beating Alabama 6-3 in 1980.

Mississippi State’s Air Raid offense vs. Georgia’s defense. The Bulldogs enter with the SEC’s No. 2 passing game (325.6 yards per game) and its top passer in quarterback Will Rogers (323.6 yards, 26 touchdowns). MSU is a bit more balanced this season but remains most dangerous because of its expertise gaining yards after the catch. Georgia counters with the league’s top defense (265.6), including rushing (86.4 yards) and scoring (10.8 points).

Georgia: Junior DT Jalen Carter (6-3, 300) is projected as a high first-round pick in next year’s NFL draft. He delivered one of his best games against Tennessee with four tackles, including two for losses, and a sack while forcing two fumbles. Carter missed two games with a knee injury this season, and his strong play against the Vols was encouraging for Georgia’s postseason hopes.

Mississippi State: Wide receiver Rara Thomas leads the Bulldogs with 560 yards and is second with five TD catches. He posted his second multi-TD game against Auburn with scoring catches of 22 and 33 yards and has 10 career touchdowns.