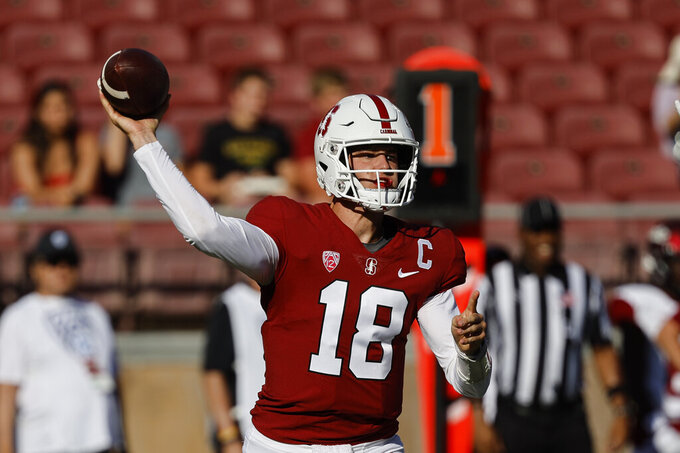 Line: USC by 7 1/2, according to FanDuel Sportsbook.

Both teams had easy non-conference tuneups to open the season but now jump right into conference play in Week 2. First-year USC coach Lincoln Riley looks to snap the Trojans' three-game losing streak in the Pac-12 and avenge a home loss to Stanford last season. The Cardinal lost their final six Pac-12 games in 2021.

USC's secondary vs. Stanford QB Tanner McKee. McKee was sharp in the opener with his second career 300-yard passing game. He went 22 for 37 for 308 yards and two TDs but will face a much tougher defense this week. The Trojans intercepted four passes last week and returned three of them for TDs, tying a Pac-12 record.

USC: QB Caleb Williams. The Oklahoma transfer made a strong debut for USC, completing 19 of 22 passes for 249 yards and two TDs. He also ran for 68 yards on six carries. Williams' 86.3% completion rate was the best in a single game for a USC QB with at least 20 passes since Matt Barkley went 19 for 20 against Colorado in 2012.

Stanford: RB E.J. Smith. The son of Hall of Famer Emmitt Smith had a big day last week against Colgate. He ran for a career-high 118 yards on 11 carries and caught five passes for 37 yards. He ran for two TDs, including an 87-yarder that was the fifth longest in school history.

USC has lost four of its last five games at Stanford. ... The 66 points last week against Rice for the Trojans were their most in a game since 2008 against Washington State and most in an opener since 1929 against UCLA. ... Transfer WR Jordan Addison had five catches for 54 yards and two TDs in his debut for the Trojans. ... USC had no punts in the opener, the first time the Trojans have done that in a game since 2014 against Fresno State. ... Stanford committed four turnovers in the opening win against Colgate, the first time the Cardinal won a game with at least four turnovers since 2012 against Oregon State. ... Cardinal WR Michael Wilson caught two TD passes against Colgate.