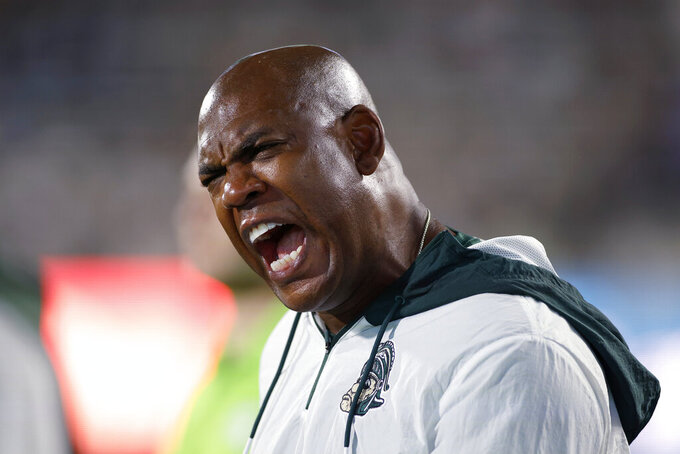 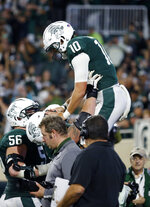 Line: Michigan State by 5, according to Fan Duel Sportsbook.

Michigan State is off to its best start since going 8-0 in 2015 and earning a spot in the College Football Playoff. This game also will have a revenge factor. Rutgers went to East Lansing, Michigan, last season and spoiled the debut of Mel Tucker as the Spartans' coach. It also gave Rutgers coach Greg Schiano a win to start his second stint. The Spartans are trying to keep rolling and the Scartlet Knights are looking to snap a two-game losing streak.

Rutgers defense against Michigan State: The Scarlet Knights forced seven turnovers last year in stunning Michigan State 38-27. The unit has almost everyone back. It needs a bounce back performance after being shredded by No. 7 Ohio State last week. The Spartans have turned the ball over just three times over five games and have forced eight turnovers.

Rutgers: Aron Cruickshank. The junior is fifth in the conference in all-purpose yards, averaging 126.8 yards. He is second on the team with 206 yards receiving, including a 75-yard touchdown against now-No. 7 Ohio State this past weekend.

Tucker is the second coach in school history to begin his second season 5-0, joining Charlie Bachman in 1934. ... RB Kenneth Walker III had 24 carries for 126 yards and scored three touchdowns, while QB Payton Thorne was 20-of-30 passes for 327 yards. He threw for a TD and ran for another in win over Western Kentucky. ... After facing No. 9 Michigan and No. 7 Ohio State the past two weeks, Rutgers faces a third straight ranked opponent for the second time in school history. The other time was in 2007 when it faced No. 2 South Florida, No. 6 West Virginia and No. 16 Connecticut. The Scarlet Knights have lost 32 straight games to ranked opponents. ... Eric LeGrand, who was paralyzed in a game against Army in 2010, and four other student-athletes will be inducted into the Rutgers Hall of Fame in a halftime ceremony at Homecoming.