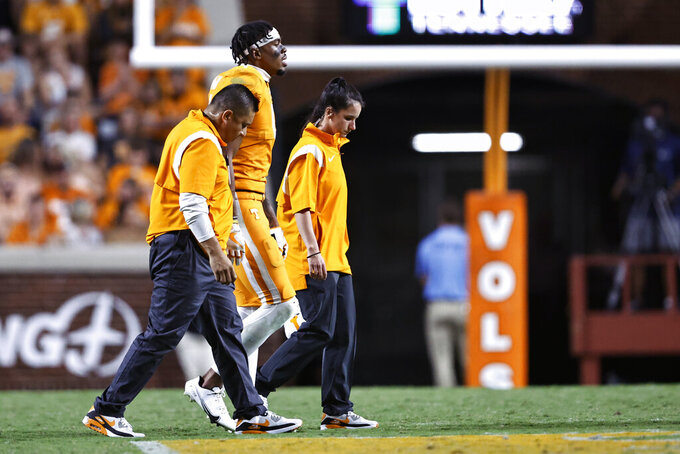 Tennessee wide receiver Cedric Tillman (4) walks off the field after being injured during the first half of an NCAA college football game against Akron, Saturday, Sept. 17, 2022, in Knoxville, Tenn. (AP Photo/Wade Payne) 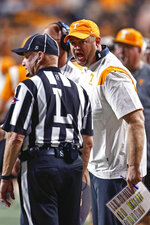 “Probably 30 seconds after I arrived on campus,” the second-year Tennessee coach said. “This is one of the ballgames that this fan base and our players point to.”

This hasn't been much of a rivalry the past two decades, not with Florida winning five straight and 16 of the last 17.

No. 11 Tennessee (3-0) feels much more confident as a double-digit favorite looking for its best start since 2016 with fans painting a sold-out Neyland Stadium an orange-and-white checkerboard for the Vols' Southeastern Conference opener.

This will be the third team ranked inside the AP's Top 20 that the 20th-ranked Gators (2-1, 0-1) have faced in the opening month, the toughest start in the Bowl Subdivision. The Gators are just above South Carolina at the bottom of the SEC East after holding off South Florida 31-28 last week in the Swamp.

And this is the Gators' first road game of the season with ESPN bringing GameDay to Knoxville for the show.

“It’s a big game for everybody,” Florida safety Tre'Vez Johnson said. “Can’t make the moment too big. We’ve still got to go out there and play.”

A year ago, quarterback Hendon Hooker made his second straight start for Tennessee after replacing an injured Joe Milton in a 38-14 loss to Florida. Hooker graded that performance as a D, and he still is looking for more this season.

“I haven’t played to my standards yet, but we’ve been winning ballgames and that’s the total end story that I’m looking for, is are we winning?" Hooker said. “It doesn’t matter how I play or how somebody else plays if we’re winning.”

With Florida quarterback Anthony Richardson still looking for his first TD pass of the season, coaches decided to do something to get him and his receivers on the same page. Richardson and his receiving corps watched last week’s game together and broke down Vols’ film together.

“Just trying to understand what can help us in different coverages and stuff like that,” Richardson said. “So we’re going to try a new philosophy this week and see how it goes.”

Richardson rushed for 106 yards in the season-opening win over No. 7 Utah. In two games since then, he’s had 30 net yards.

First-year Florida coach Billy Napier was born in Cookeville, Tennessee – about 100 miles west of Knoxville and smack dab in the middle of Vols' country.

“I’ve got all kind of family that’s diehard Tennessee fans,” Napier said as he prepares for his first trip to Neyland Stadium as a head coach.

Napier’s immediate family moved to Georgia when he was 2 years old. But he still has ties to the Volunteer State. He has an uncle living in Crossville. Both parents went to college at Tennessee Tech. His mom’s parents owned a tobacco farm in Sparta. His dad grew up in Salina.

Are they rooting for the Gators on Saturday?

“Absolutely, yeah,” Napier said. “If they’re not, they won’t be at the game, I can promise you that.”

The Vols definitely will be without receiver Jimmy Calloway for the first half. He'll be sitting out a suspension for being ejected from Tennessee's win last week after punching an Akron player.