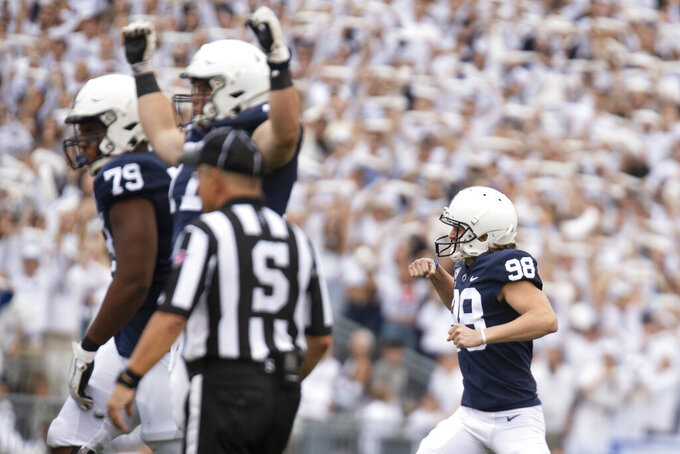 UNIVERSITY PARK, Pa. (AP) — The 126-year rivalry between No. 13 Penn State and Pittsburgh is going on indefinite hiatus for the second time in a generation. Pitt coach Pat Narduzzi gave both sides something to chew on until they meet again, no matter how long the break lasts.

Down a touchdown with the ball at the Penn State 1 and less than 5 minutes on the clock Saturday, Narduzzi opted to attempt a field goal on fourth down instead of going for it. Alex Kessman's 19-yard kick clanged off the left upright, helping give the Nittany Lions the breathing room they needed to escape with a 17-10 victory.

The 53-year-old Narduzzi joked before the 100th clash between the schools separated by 139 miles that the next time they face off, he'll either be retired or "in a coffin." He was kidding at the time. The smile was gone as he tried to explain the rationale for taking the ball out of quarterback Kenny Pickett's hands three feet from tying it.

"Again, we can look back at all the calls, guys," Narduzzi said. "All the armchair quarterbacks, you guys got those armchair desks there. It's easy to make those decisions. We were throwing the ball. We threw for over 300 yards."

Yet needing just one to even it on the road late, the Panthers (1-2) came up short thanks in part to Penn State's defense. Pickett rolled out on first-and-goal at the 1 and threw the ball away while getting chased by linebacker Cam Brown. A read-option on second down went nowhere, with Pickett unable to churn past Garrett Taylor and Jesse Luketa. Brown harassed Pickett into an incompletion on third down and out trotted Kessman.

"Players, we're all in there saying 'Let's go for it,'" said Pickett, who threw for career-high 372 yards. "We all have confidence in (each other). I know my guys. I love them. They played so hard. It's tough. A loss like this is tough."

The Panthers had one more chance to draw even, moving from the Pitt 16 to the Penn State 26. But Pickett's heave to Taysir Mack on the final snap was broken up by Brown and fell to the turf to give the Nittany Lions bragging rights for now and possibly forever. Penn State improved to 53-43-4 all-time against Pitt, including a 3-1 mark during a four-game renewal that began in 2016.

Leaving Pitt 0-1, something Narduzzi insisted won't linger even after instituting a media blackout for his players leading up to the game and admitting it would feel like "winning the Super Bowl" to beat the Lions for a second time in four years.

"A loss is a loss," Narduzzi said. "It doesn't matter who it's to, when it is. It's a nonconference game. All our goals are still ahead of us. We've got a resilient football team that I love. We'll be fine. We'll be just fine."

Pitt: Five seasons into his tenure, the swaggering, aggressive defensive style Narduzzi cultivated during his long run as an assistant at Michigan State has finally become a part of the culture at Pitt. The secondary may be the best in the Atlantic Coast Conference and the defensive line looks capable even with starters Rashad Weaver and Keyshon Camp both done for the season with knee injuries.

Penn State: The offensive line had issues with Pitt's exotic blitz packages, allowing Clifford to be sacked three times and get hit hard a handful of others. That needs to be corrected with Michigan, Michigan State and Ohio State still on the schedule.

The Nittany Lions found the sledding far tougher following blowouts over Idaho and Buffalo to open the season.

Journey Brown ran for 109 yards and a touchdown and Noah Cain's 13-yard third-quarter sprint to the end zone gave the Nittany Lions the lead for good.

Sean Clifford completed 14 of 30 passes for 222 yards while spending most of the afternoon under heavy duress.

"He's a winner," Penn State tight end Pat Freiermuth said of Clifford. "Our whole team knew he's a winner from the start. We could tell in camp. He's not going to go down easy. You can keep hitting him, but he's going to keep getting back up."

Don't expect Penn State to inch closer to the Top 10 after being taken to the last play by a 17-point underdog.

END OF THE LINE?

While Pitt athletic director Heather Lyke and Penn State's Sandy Barbour haven't ruled out getting the schools back together down the line, for now there are no plans for a 101st meeting, giving the game in front of 108,661 an air of finality.

"It's a rivalry game. Chippy game. Crowd yelling stuff. And we're yelling back and going at it with the players on the field," Pickett said. "It's a great game. I'm sure somewhere down the road they're going to bring it back. There's no reason not to."

Pitt: Welcomes No. 17 UCF to Heinz Field next Saturday. The Golden Knights drilled the Panthers 45-14 last year in Orlando.

Penn State: Off next week then opens Big Ten play by traveling to Maryland on Friday, Sept. 27. The Nittany Lions have beaten the Terrapins by a combined 104-6 in the last two meetings.