No. 14 Penn State defense shines in 30-0 rout of Maryland 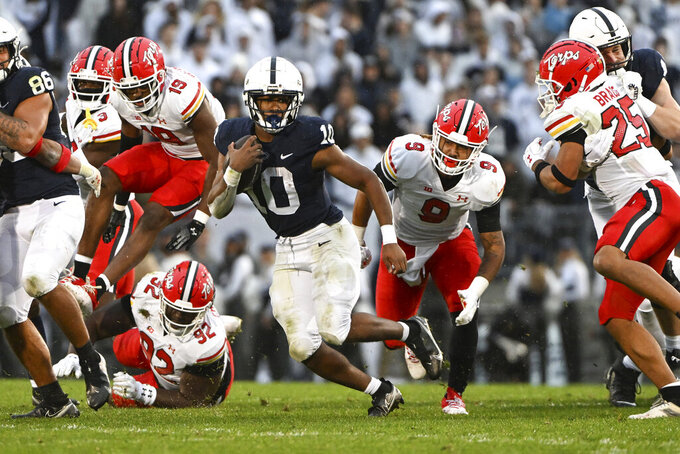 Penn State running back Nicholas Singleton scores a touchdown against Maryland during the first half of an NCAA college football game, Saturday, Nov. 12, 2022, in State College, Pa. (AP Photo/Barry Reeger)

STATE COLLEGE, Pa. (AP) — When the finger-pointing began on the other side of the line of scrimmage, defensive end Chop Robinson knew he and his teammates had Maryland broken.

It didn’t take long, as No. 14 Penn State smothered the Terps in a 30-0 win on Saturday, fueled by nearly constant pressure that Robinson and his fellow pass-rushers turned into seven sacks in a soggy Beaver Stadium.

“You can see their guys turning against each other, arguing with each other,” said Robinson, who transferred from Maryland after last season. “Once their offense starts doing that, that’s when you have them. You can take control of the game.”

That’s exactly what the Nittany Lions did.

Nick Singleton scored two touchdowns and ran for 113 of his 122 yards in the first half, Brenton Strange caught a touchdown pass and Jake Pinegar kicked three field goals for the Nittany Lions (8-2, 5-2 Big Ten, No. 14 CFP), who beat Maryland for the seventh time in nine games since the Terps (6-4, 3-4) joined the Big Ten in 2014.

Like the overall series, this one was all Nittany Lions thanks to the defense.

“Our guys are getting more and more comfortable and confident in how we want to play football,” Penn State coach James Franklin said. “Being disruptive and being vertical, up the field and through gaps.”

Maryland quarterback Taulia Tagovailoa was hit hard as he threw incomplete on the Terps’ first play from scrimmage — an omen of things to come from a Nittany Lion defense that added seven QB hurries, forced nine punts and three turnovers on down.

The Nittany Lions did most of their damage early. They sacked Tagovailoa five times and held Maryland to just 27 total yards before halftime.

By that point, Penn State quarterback Sean Clifford had put the game out of reach when he threw a 3-yard touchdown pass to Strange just 6:08 in. Meanwhile, Singleton lapped Maryland’s defense on a pair of fourth-and-inches runs that went for 45- and 27-yard touchdowns.

“You make a mistake, (Singleton) can go for 50 or 60 at any point,” Franklin said. “That has really helped our offense this year.”

Pinegar added field goals from 50 and 46 yards to put Penn State up 27-0 at halftime and hit a 21-yarder midway through the third.

Tagovailoa finished 11 for 22 for 74 yards. Roman Hemby led the Terps with 68 rushing yards on 13 carries.

“I told our team now is not the time to panic,” Maryland coach Mike Locksley said. “But it is time that we, starting with myself, take a deep look at everything we’re doing on offense, defense and special teams, and find a way to get us back on the right track.”

Rakim Jarrett was able to play after leaving last week’s game with an unspecified lower leg injury. But with Tagovailoa under siege, Maryland’s best offensive weapon didn’t play much of a factor, even as Penn State star cornerback Joey Porter Jr. sat out with a non-injury related issue.

Jarrett caught his first pass midway through the second quarter and was targeted on four straight plays before the Terps turned the ball over on downs at midfield. He wasn’t targeted again until under six minutes left in the third and finished with three catches for 30 yards on six targets.

Meanwhile, Franklin drew his first unsportsmanlike penalty call in 12 years when he was barking at his own players in the second quarter. He said afterward he believes the official who flagged him thought Franklin was screaming at them.

So Franklin dropped to the ground and pumped out 15 pushups.

“I was embarrassed by it,” Franklin said. “I did my pushups. Everybody’s held accountable.”

Maryland: It looks as if it could be another long November for the Terps. They’re just 2-9 in the month all-time under coach Locksley and were beaten all over the field on Saturday. Their inability to run the ball and protect Tagovailoa doomed them from the start.

Penn State: Although the Nittany Lions don’t have a shot at a Big Ten championship, the future looks bright. The team’s most impactful players down the stretch are freshmen. Linebacker Abdul Carter had a team-best seven tackles, a sack and a forced fumble. Singleton and fellow back Kaytron Allen appear to be Penn State’s best running back tandem since Saquon Barkley and Miles Sanders.