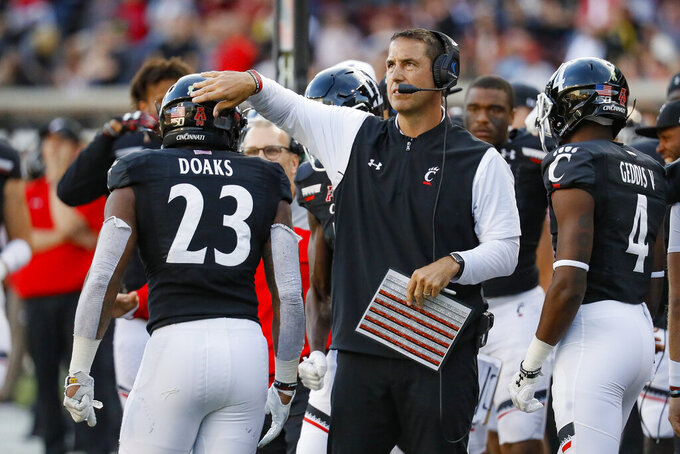 Cincinnati head coach Luke Fickell, right, congratulates running back Gerrid Doaks (23) after his touchdown during the second half of an NCAA college football game against Tulsa, Saturday, Oct. 19, 2019, in Cincinnati. (AP Photo/John Minchillo)

The Bearcats put on the line their five-game winning streak and their highest national ranking in a decade, and will try to hold on to first place in the East Division. The Pirates are looking for their first victory over a Top 25 opponent since 2014 and give coach Mike Houston a signature victory in his first season at the school.

Cincinnati's defense vs. East Carolina's offense. The Bearcats have done it with defense, tying for second nationally and in the AAC with 19 takeaways and leading the conference with a turnover margin of plus-nine. For the Pirates to have a chance at the upset, they'll have to take care of the ball. They've had multiple turnovers in four of their five losses and have been turnover-free only once against FBS opponents.

Cincinnati: CB Ja'Von Hicks shares the AAC lead with four interceptions and also has recovered three fumbles. Five of those have come in his last two games, victories over Houston and Tulsa.

East Carolina: QB Holton Ahlers will have to take care of the ball. He's throwing for 209 yards per game, but only one other quarterback in the conference — Temple's Anthony Russo — has thrown more interceptions than Ahlers, who has seven.

This is Cincinnati's best national ranking since the 2009 team climbed to No. 4 on its way to a perfect regular season, a Big East title and a berth in the Sugar Bowl. ... The Pirates haven't beaten a Top 25 team since they outscored No. 25 North Carolina 70-41 in 2014. Their last victory over a ranked conference opponent came in 2009, a 38-32 win over No. 18 Houston when both were in Conference USA. ... East Carolina's only win in the series since 2001 came in Cincinnati's last visit to Greenville. That 48-20 victory over the Bearcats marked ECU's only victory since 2015 against an AAC team aside from Connecticut.