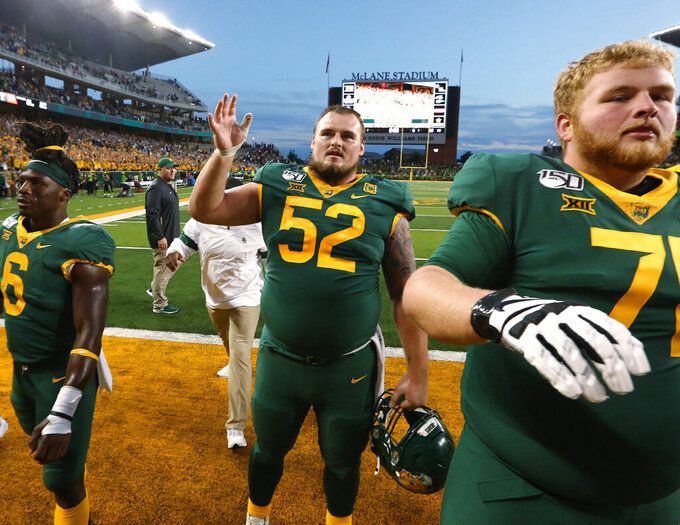 In this Saturday, Oct. 12, 2019, photo, Baylor offensive lineman Sam Tecklenburg, center, thanks the fans after the team's win over Texas Tech in an NCAA college football game in Waco, Texas. Standing next to Techlenburg are JaMycal Hasty, left, and Jim Threet, Tecklenburg is among 10 current seniors who redshirted in 2015, when Baylor was coming off back-to-back Big 12 titles and had its last eight-game winning streak. There is also sixth-year receiver Chris Platt, who was playing as a redshirt that season and got an extra year of eligibility after a season-ending knee injury four games in the 2017 season. They all stayed in the aftermath of a sprawling sexual assault scandal that led to coach Art Briles getting fired before the 2016 season. (Rod Aydelotte/Waco Tribune-Herald via AP)

WACO, Texas (AP) — Big and versatile Sam Tecklenburg found it hard to think about when Baylor would be good again while the Bears were losing all those games his sophomore season two years ago.

That was Matt Rhule's first season, which the coach described as unbelievably difficult "because you see the guys, they work hard all week and then they're just dejected every game."

Many of those freshmen and sophomores who were forced into action during the only 11-loss season in school history, while winning only once in 2017, are now the upperclassmen for the Big 12 co-leading No. 18 Bears (6-0, 3-0 Big 12). Baylor's eight-game winning streak is the longest in the conference.

"It does feel good to know that I was part of the foundation for something new," said Tecklenburg, a 310-pound senior starting left guard who was about 40 pounds lighter as a redshirt freshman when he was a tight end before the past two seasons as the starting center.

"Looking back at the 1-11 year and just seeing now the progress of how Baylor has changed, the culture has changed, and just how when you buy into a process that it actually works," said senior linebacker Jordan Williams, his role expanded with a season-ending knee injury last week to leading tackler Clay Johnston, another of the seniors.

Tecklenburg, Williams and Johnston are among 10 current seniors who redshirted as true freshmen in 2015, when Baylor was coming off back-to-back Big 12 titles and had its last eight-game winning streak. There is also sixth-year receiver Chris Platt, who played as a redshirt freshman that season and got an extra year of eligibility after a knee injury only four games into the 2017 season.

They all stayed in the aftermath of a sprawling sexual assault scandal that led to coach Art Briles getting fired before the 2016 season, when the Bears started 6-0 under interim coach Jim Grobe before losing 17 of their next 19 games. There was a six-game losing streak before a Cactus Bowl victory, then 1-11 in Rhule's debut season.

"There's always going to be a special relationship with those guys that were on that 1-11 year," Tecklenburg said. "We've been through a lot, so that was a hard year. Just where we've come right now, we want to go a lot further, but it is special to kind of reflect sometimes and know that we've built something."

A 43-point loss at Oklahoma State was the most lopsided in 2017, when only three of the 11 losses were by more than 14 points. That is where the Bears play Saturday after surviving double overtime to beat Texas Tech at home last weekend.

"Our older players went through all of the trials and tribulations and built it the right way, so that they appreciate now when they're having success what it took to get here," Rhule said.

"That year we went 1-11, a lot of those games, they weren't just blowouts and they weren't just teams just dominating us physically," Williams said. "It was just people were older and more experienced than we were."

These Bears are far from satisfied only halfway through the regular season. The trip to Stillwater is part of a difficult remaining schedule, including consecutive home games against No. 5 Oklahoma and No. 15 Texas next month.

"There's still a lot that we need to get better at. I think since conference play started, I don't think we've played near our best football," Tecklenburg said. "At least we're getting wins while we're learning these lessons. It'd be a lot harder if we were losing these games."

Baylor's current winning streak began with a win over Texas Tech in the regular season finale last November, and the Bears then beat Vanderbilt in the Texas Bowl.

Both of their Big 12 home games have come down to the wire. They won 23-21 over Iowa State in their league opener Sept. 28 when John Mayers kicked a 38-yard field goal in the final minute after blowing a 20-0 lead in the fourth quarter.

"I think everyone on the team knows we're capable of a lot more," Tecklenburg said. "So while we are happy after the wins, there is a feeling in the locker room every week of we've got to look at this honestly tomorrow and grow. ... A lot of people want to be more than 6-0."