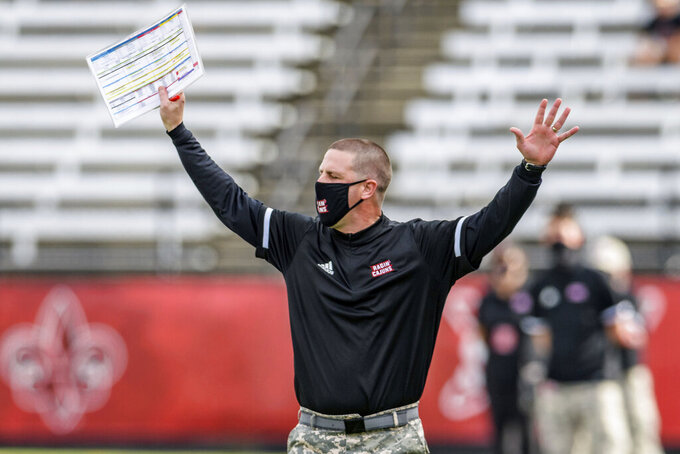 MONROE, La. (AP) — No. 23 Louisiana-Lafayette is expected to get coach Billy Napier back from isolation just hours before the Ragin’ Cajuns renew their annual rivalry with a Louisiana-Monroe squad that hasn’t played in three weeks.

It’s safe to say the COVID-19 pandemic has taken its toll on both the Cajuns (7-1, 5-1 Sun Belt) and Warhawks (0-8, 0-5), but won’t stop them from getting together at ULM’s Malone Stadium on Saturday for a game that players on both teams look forward to all year.

“This is a rivalry game regardless of records and statistics,” Napier said. “These guys have played us down to the last possession of the game the last two years.”

Louisiana-Lafayette has not played since its Sun Belt West-clinching victory over South Alabama on Nov. 14 because its game against Central Arkansas last week was cancelled by a COVID-19 outbreak affecting the Cajuns. Among those who contracted the disease was Napier, who said this week he was feeling fine but could not be around players or staff until Saturday.

He has spent this week watching practice videos and holding meetings online, but wasn’t about to complain.

To Napier, the theme of the 2020 season is to accept uncertainty and upheaval, and see every problem as an opportunity to find a solution.

He said his inability to attend practice this week provided "opportunities for other staff and players to really step up and take over.”

ULM coach Matt Viator said resuming football after an outbreak that shut down his program for a couple weeks is “nothing like I’ve ever been through for sure.”

“I’m not sure what’s going to happen,” he added. “We know it’s going to be a tough challenge for us to play a team of this caliber, but we’re concerned about us and trying to get us back going and putting the very best product that we can out on the field.”

“I can’t say enough good things about Levi Lewis,” Viator said. “There’s a few plays every game that he makes, that he extends plays running or gets out of the pocket and makes throws. ... It’s hard enough to stop him and then when you think you do have him, he extends plays.”

While ULM ranks 119th nationally in scoring at 16 points per game, quarterback Jeremy Hunt is coming off a promising performance. In a 52-34 loss at Georgia State in ULM’s last game on Nov. 7, Hunt came off the bench and passed for career-highs of 339 yards and three touchdowns.

ULL’s defense ranks 28th nationally in points allowed with just 22.1 per game. A big reason is the play of the secondary, which has intercepted 11 passes this season. The Ragin’ Cajuns are allowing 181.9 yards passing per game, which ranks 15th nationally. But if ULM has to run the ball, that could be a problem for the Warhawks, who’ve been averaging 66 yards rushing, which ranks fourth from last nationally.

Now in his third season at ULL, Napier has yet to see his team lose to a team in the Sun Belt West Division. The Cajuns will try to improve to 12-0 in the division under Napier on Saturday.

History is on the Cajuns’ side for other reasons. They’ve won two straight in the series and 10 of the last 13. But as Napier noted, many of those games have been close. In fact, 10 of the past 13 games also have been decided by single digits.