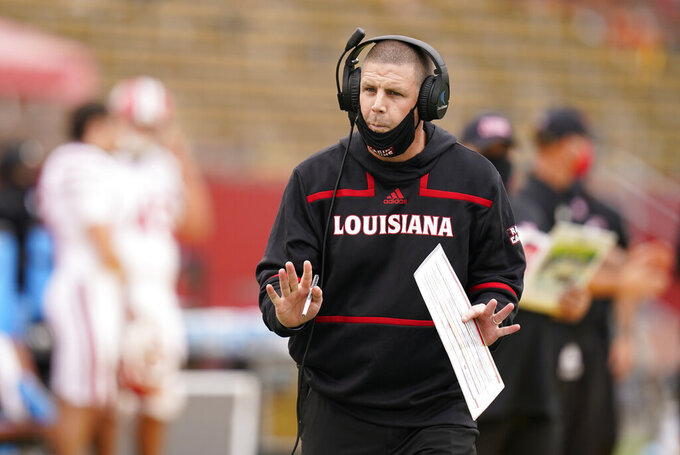 LAFAYETTE, La. (AP) — While No. 25 Louisiana-Lafayette is on track for one of the best seasons in program history under coach Billy Napier, it could come crashing down this week if the Ragin’ Cajuns stumble against a South Alabama squad that has managed to hang around in the Sun Belt Conference’s West Division.

ULL (6-1, 4-1 Sun Belt) is trying to win the West for a third straight season, stay in the national rankings and make its case for one of the higher-profile bowl games. But visiting South Alabama (3-4, 2-2) not only remains mathematically alive in the division, but would have the upper hand based on head-to-head results if it could stage an upset.

“The guys know that. We know that,” Jaguars coach Steve Campbell said this week. “In our half of the league, Lafayette’s sitting up top right now with one conference loss, and if we can travel over there to Lafayette and get this victory, then all of our goals as far as conference championship are still very attainable and we still control our own destiny.

“Let’s get the ‘W’ and then we’re in the driver’s seat,” Campbell added.

This will be South Alabama’s second straight game against ranked team. They fell, 23-6, last weekend at current No. 15 Coastal Carolina and are two-touchdown underdogs this week. But Napier has high praise for the way Campbell has built South Alabama’s program and sees them as an emerging threat in the league.

“These guys are big, fast and physical and they play extremely hard,” Napier said. “They have continued to improve. So, this will be a big challenge, and certainly has a lot of implications to the big picture.”

History is on Napier’s side. Since he took over as head coach three seasons ago, Louisiana-Lafayette has not lost to a Sun Belt West Division team, going 10-0 in such matchups. ULL also has won these teams' last four meetings overall.

Louisiana-Lafayette is trying to buck a trend of slow starts that have forced them to rally back in a number of their victories this year, including last week at Arkansas State, where they were shut out in the first half and didn’t take their final lead until less than two minutes remained in the game for their fourth victory by a touchdown or less.

“Obviously we can play a lot better. We certainly have not started as well as we would like a number of times,” Napier said. “But you’ve got to credit the staff, the adjustments, plus the resolve of the players to kind of keep their poise, and we’ve kept games close. Our defense and kicking game have allowed us to keep these games under control and not get out of hand until we figured it out on offense.

“What we’re focused on is the consistency of performance,” Napier added. “We still haven’t played a complete game and put it all together.”

A big problem for the Jags last week was converting on third down. South Alabama did so on just two of 14 opportunities, leading to some considerable reflection on the team’s approach to those scenarios, even though they’ve converted on a respectable 42% of third downs for the season.

“We definitely need to look at what we were doing and how we can do it better in order to give ourselves a chance to be more successful,” Campbell said.

Both teams see their quarterback play as a strength.

Louisiana-Lafayette’s Levi Lewis has thrown for 1,628 yards this season, the most in the Sun Belt and 17th most nationally. His 244 yards passing against Arkansas State gave him 5.640 for his career and moved him past Brian Mitchell (5,447) for the fourth-most passing yards in school history.

South Alabama’s Desmond Trotter has completed 70.1% of his passes for 1,187 yards and eight TDs against two interceptions.

Even in last week’s loss at Coastal Carolina, Trotter completed 23 of 31 passes for 243 yards and was not intercepted.

Louisiana-Lafayette’s defense has recorded multiple interceptions in three straight games and is tied for the Sun Belt lead with 10 overall.