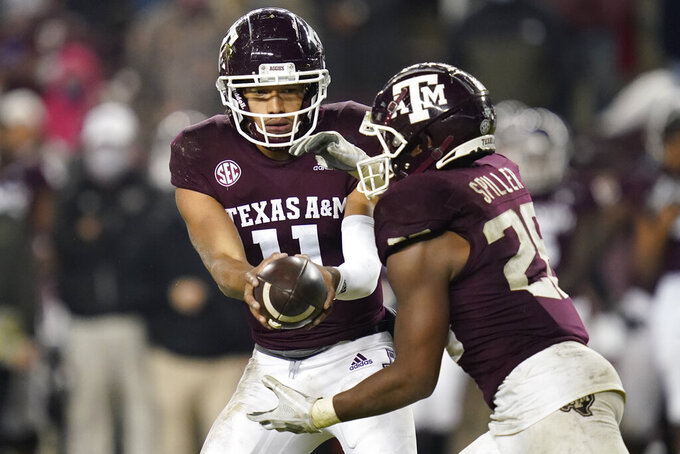 The Aggies are still in the playoff hunt even with slim chances of winning the SEC Western Division. They’ve won five games in a row though two games were postponed because of a coronavirus outbreak. An Auburn win would go a long way toward salvaging a disappointing season. But the Tigers weren’t competitive against either No. 11 Georgia (losing 27-6) or No. 1 Alabama, which won 42-13.

Auburn's running game against Texas A&M's defense, which ranks fifth nationally against the run. The Tigers may be shorthanded in the backfield, with tailbacks Tank Bigsby (hip) and D.J. Williams (ankle) nursing injuries and offensive tackle Alec Jackson (hand) out. The Aggies are allowing only 87.1 yards a game on the ground.

Texas A&M: RB Isaiah Spiller has topped 100 rushing yards four times during the Aggies' five-game winning streak. He leads the league with an average of 112 yards per game. Spiller's three runs of 50-plus yards is the most in the SEC.

Auburn: QB Bo Nix will likely need to deliver with both his passing and running for the Tigers to have a chance. Nix hasn't put up big numbers (10 touchdowns, seven interceptions), but he is a scrambler and has 1,854 passing yards and 283 on the ground.

Auburn has won the last three meetings. Before the Tigers’ 2018 home win, the visiting team had won every meeting since Texas A&M joined the SEC in 2012. ... Texas A&M has held two straight SEC opponents — South Carolina and LSU — to fewer than 10 points in back-to-back games for the first time since 2000. ... The Aggies are off to a 6-1 start for the first time since 2016. ... Auburn has only played one December home game before, beating Alabama 30-20 in 1989 in the first Iron Bowl at Jordan-Hare Stadium. ... Texas A&M quarterback Kellen Mond needs 48 passing yards and 47 rushing yards to become the third quarterback in SEC history to record over 9,000 passing yards and 1,500 rushing yards in their careers.