No. 5 Trojans host No. 13 Irish with plenty on the line 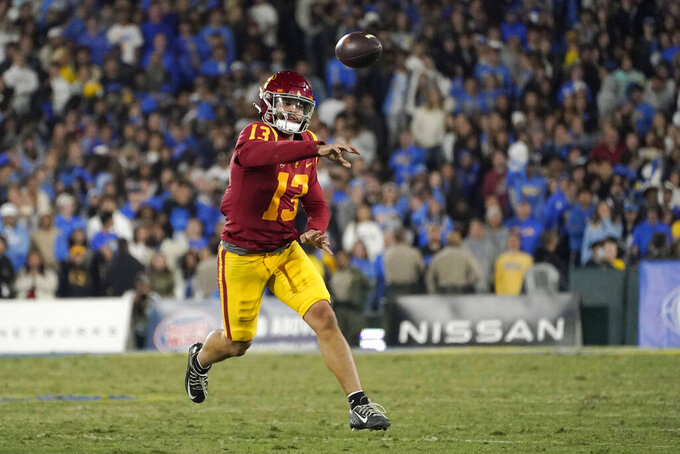 After securing a spot in the Pac-12 title game with a riveting 48-45 win over crosstown rival UCLA, USC will try to continue its unexpected march to the College Football Playoff in Lincoln Riley’s first season. Doing so will require the Trojans to end a four-game losing streak in the famed series. The Fighting Irish have rebounded following a sluggish start under new coach Marcus Freeman, picking up five straight victories, including a 44-0 drubbing of Boston College in their home finale. A New Year’s Six bowl could be in play if they retain possession of the Jeweled Shillelagh.

USC QB Caleb Williams vs. Notre Dame CB Benjamin Morrison. Williams is now firmly in the Heisman Trophy race after accounting for 503 yards and three touchdowns against the Bruins, and another signature performance against the Irish could propel him to becoming the eighth Trojan to claim the award. Morrison had three interceptions against the Eagles, giving him a team-leading five picks this season. The chess match between the two standout players, serving as proxies on the field for their respective coaches, will be fascinating.

Notre Dame: TE Michael Mayer has been the centerpiece of the Irish passing game, making 59 receptions for 711 yards and seven touchdowns. USC struggled to cover between the hashes in its 43-42 loss at Utah, so whether Mayer can have the same success will be one of the decisive factors in the matchup.

USC: WR Jordan Addison had seasons highs in receptions (11) and yards receiving (178) against UCLA. Despite missing two games because of a lower-body injury and playing on a managed snap count when he returned, Addison has eight touchdown catches, tied with Arizona WR Tetairoa McMillan for most in the Pac-12.

Williams threw his third interception of the season against the Bruins. When UCLA scored a touchdown on the subsequent possession, they were the first points USC allowed this year following a turnover on offense. ... Notre Dame DE Isaiah Foskey set a school record with his 25th career sack, picking up one against the Eagles to pass Justin Tuck (24 1/2). Foskey has 9 1/2 sacks this season and could become the seventh Irish defender to reach double digits. ... The Trojans had three interceptions and recovered one fumble against the Bruins, giving them 24 takeaways. Their 18 interceptions is most in the FBS, as is their plus-20 turnover margin. ... Notre Dame leads the nation with seven blocked punts, setting a school record and the most by a Power Five team since 2008. ... With RB Travis Dye out for the season because of an ankle injury, Austin Jones had 177 yards from scrimmage and two touchdown runs against UCLA. ... If the Irish beat the Trojans, it would be their fourth win against an AP Top 25 ranked opponent this season. Freeman would join Terry Brennan in 1954 as the most recent first-year coaches at Notre Dame to accomplish that feat. ... Riley needs one more win to match Howard Jones in 1925 and John Robinson in 1976 for the most victories by a USC coach in his debut season. ... Both the Irish and Trojans have turned it on in the second quarter, with each team’s most productive spell coming right before halftime. Notre Dame has a 129-36 scoring margin (plus-103 differential) in the second, USC a 141-79 advantage (plus-62). ... The Irish and Trojans have not played at the LA Memorial Coliseum since 2018, a 24-17 win for the visitors. Their scheduled 2020 meeting was canceled because of the pandemic.