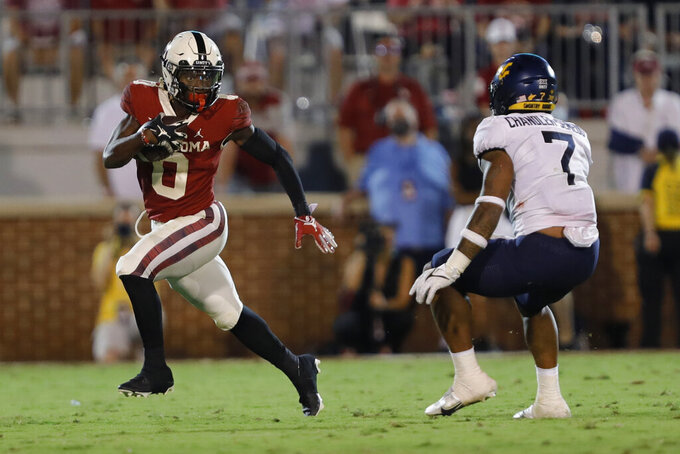 MANHATTAN, Kan. (AP) — Oklahoma hasn't played a true road game in nearly two years thanks to the pandemic, which forced those schools that did allow fans last year to limit capacity, and four consecutive home games to start this season.

The sixth-ranked Sooners figure to be in for a rude welcome on Saturday.

Not only are they finally venturing out of Norman, they are playing their first Big 12 road game since they announced plans to bolt the conference along with Texas shortly before the season. The decision to head for the SEC was hardly appreciated by longtime cohorts such as Kansas State, who were left on shaky footing.

“We really tried to prepare for that all the way through spring,” Sooners coach Lincoln Riley said. “You can't knowing that just about half our roster — maybe close to half — hasn't played a full college road game. We've tried to prepare guys for it.”

For all their dominance of the Big 12 the past few years, the Sooners have struggled to deal with the Wildcats, who are trying to win their third straight in the series for the first time since the early 1990s. Kansas State dealt Riley's bunch their only regular-season loss in 2019 before turning the trick again in the second week of the season a year ago.

“Honestly, I've been looking forward more to away games than I have home games just because to have the crowd against you and stuff like that,” Oklahoma wide receiver Marvin Mims said. "That's a really neat opportunity. They're going to be in there roaring, especially since we're Oklahoma. We're going to get everybody's best when we go there.”

Maybe there's something to the name on the front of the jersey bringing out the best in Kansas State.

“I would say the kids probably know that we're playing somebody who's ranked but it's nothing that we would emphasize — that, ‘This would be a great win because it’s over a third-ranked or fourth-ranked team,,'” Wildcats coach Chris Klieman said.

“I'll be honest with you: Every win is a great win,” Klieman said. “It’s hard to win football games."

Especially when you have quarterback questions.

Sixth-year senior Skylar Thompson has been out with a knee injury sustained against Southern Illinois, and while he's been doing more in practice it appears he is still a couple weeks away from playing. That means sophomores Will Howard, who has been ineffective in Thompson's place, and Jaren Lewis figure to take the snaps against the Sooners.

“It's just about us and controlling what we can control,” Kansas State linebacker Ryan Henington said. " Like last year and the year before, when we go out and execute our game plan and stick to our keys and principles, I think we will be all right.”

Thompson was 12 of 18 for 240 yards in just over a game for Kansas State before getting hurt. Howard and Lewis have combined to go 31 of 61 for 403 yards with two touchdowns and two interceptions in nearly three full games.

“We’re capable of doing it,” Klieman said of passing the ball effectively. “It’s just got to be more consistent.”

Oklahoma quarterback Spencer Rattler came into the season with Heisman Trophy aspirations, but the past couple of weeks have been underwhelming. He threw for just 214 yards against Nebraska before going for 256 with a touchdown and a pick against the Mountaineers. Rattler also was sacked four times in the game.

The Wildcats could get defensive back Reggie Stubblefield back from an injury that kept him out of last week's trip to Oklahoma State. Less likely to play due to injury are cornerback T.J. Smith and tight end Daniel Imatorbhebhe.

Oklahoma State stuffed Kansas State running back Deuce Vaughn last week, stacking the box and holding him to just 23 yards on 13 carries. Vaughn had been over 120 yards rushing each of the first three weeks of the season.

Vaughn will be going against an Oklahoma defense that allowed 75 yards to West Virginia on its opening drive last week and just 151 yards on the next 46 plays combined. That included 47 yards rushing and an average of 1.6 per carry.

“We challenged each other to hold them under 100 rushing yards and one touchdown,” Sooners defensive lineman Isaiah Thomas said. “Obviously we did and it was fun to be out there.”