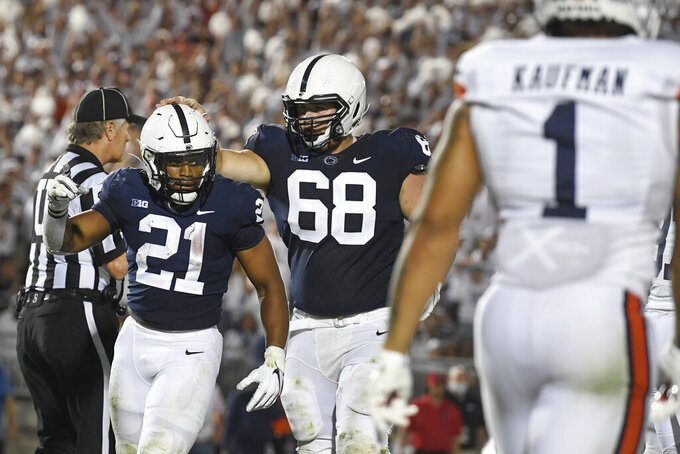 Penn State has won seven in a row since last season and will try to avoid joining the list of FBS teams who’ve lost to FCS squads so far this year. Villanova will try for its fifth win against an FBS team and first since its 2018 victory over Temple.

Penn State’s running game versus Villanova’s run defense. The Wildcats figure to be outsized and will likely be giving up speed to the Nittany Lions. Still, Villanova’s defense is allowing just 29 yards per game on the ground and has a chance to frustrate Penn State’s burgeoning offensive line if it can plug holes early.

Villanova: QB Daniel Smith. The fifth-year senior earned a share of his conference’s offensive player of the week award for his four-touchdown performance against Richmond. Smith completed 26 of 40 throws for 350 yards with two touchdowns. He also ran for a pair of scores. He’ll need to shoulder another heavy load against a Penn State defense that’s allowing just over 14 points per game.

Penn State: RB Noah Cain. The Nittany Lions’ most talented back has scored in every game so far but has yet to run for more than 69 yards in a game. Cain’s a patient back who could find more room to run against the Wildcats.

The Wildcats put 480 yards of offense on Richmond last week. … Villanova has won the last three games in the series from 1936-51. … Penn State hasn’t allowed a passing touchdown in 121 attempts. … The Nittany Lions have won 18 straight non-conference home games against in-state schools. … Penn State has beaten two ranked opponents in the first three games of the season for the first time in program history. … WR Jahan Dotson has scored a touchdown in five straight games since last season. ... QB Sean Clifford completed 87.5% of his throws against Auburn, the best single-game completion percentage for a Penn State QB in 25 years.