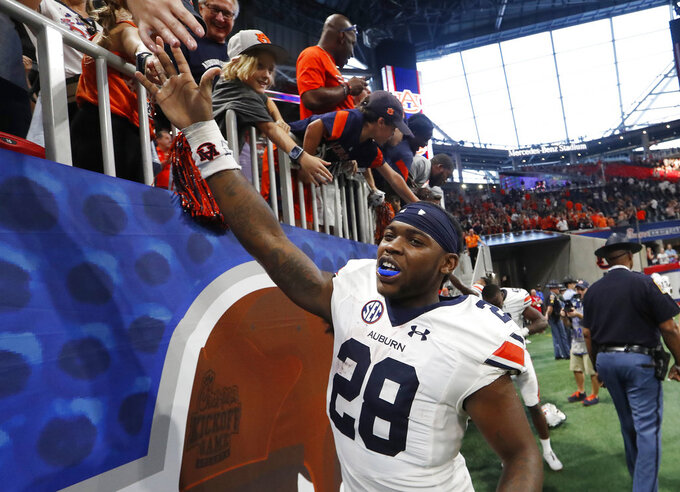 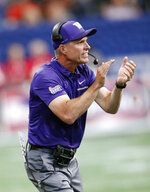 ATLANTA (AP) — The Auburn Tigers had some bad memories from their last two trips to Atlanta.
They headed home from this one feeling a whole lot better.
With a performance that didn't earn a bunch of style points but will look awfully good on the resume, No. 9 Auburn rallied for a 21-16 victory over No. 6 Washington when Jatarvious Whitlow ran 10 yards for a touchdown with 6:15 remaining Saturday.
The Auburn defense came through at the end, preserving the win with a fierce pass rush against Jake Browning.
"We talked about overcoming adversity," Tigers coach Gus Malzahn said. "Last season we didn't win hardly any close games. We knew this game was going to come down to the end."
The Tigers closed last season with back-to-back losses at Mercedes-Benz Stadium — first to Georgia in the Southeastern Conference championship game, then to Central Florida in the Peach Bowl.
They were facing another disappointment, trailing 16-15 after scoring a touchdown on their opening possession of the Chick-fil-A Kickoff Game but missing a surprise two-point conversion.
Jarrett Stidham got Auburn rolling with a 12-yard pass to Chandler Cox on third-and-9. Then, facing third-and-7 deep in Washington territory, Auburn handed off inside to Whitlow, who knocked over a Washington safety as he barreled into the end zone to cap a 10-play, 76-yard drive.
"It was an amazing feeling," said Whitlow, part of the group trying to replace workhorse runner Kerryon Johnson, who's now in the NFL. "I'm so grateful that the coaches have confidence in me in that situation."
Washington drove to the Auburn 37 with plenty of time to pull off the comeback, but Myles Gaskin was thrown for a 3-yard loss and Browning was left running for his life on the Huskies' last two offensive plays. Big Kat Bryant sacked the quarterback for another 3-yard setback, and safety Smoke Monday finished it off with a blitz that forced Browning to just fling the ball away , resulting in an intentional grounding penalty.
Stidham was 26 of 36 for 273 yards, including a 10-yard touchdown pass to Sal Cannella, who made a leaping grab in the end zone before landing flat on his back .
Browning, looking to bounce back from a disappointing junior season, completed 18 of 32 for 296 yards. He was picked off once but connected with Quinten Pounds on a 13-yard touchdown in the final minute of the first half .
"We're not into moral victories," Browning said. "We came here to win, and we didn't."
Peyton Henry put the Huskies ahead for the first time with his third field goal, a 30-yarder that clanked off the right upright but ricocheted through with 14:06 remaining.
Both teams squandered scoring chances.
Anders Carlson, taking over from older brother Daniel as Auburn's kicker, connected on three field goals — including a 53-yarder — but missed from 33 and 54 yards.
Washington was kicking itself after coming away from a first-and-goal with no points. On third down at the 3, Browning rolled right looking to make a pitch only to be smacked by Nick Poe. The ball squirted free and Auburn's Darrell Williams fell on it at the 20.
"That's where we lost the game," Browning said. "I went to pitch it. The guy put his hand out and blocked it. I've got to take the loss and take the field goal."
THE TAKEAWAY
Washington: Aaron Fuller addressed what was perhaps the biggest question mark on the roster, showing all the makings of a No. 1 receiver with seven catches for 135 yards. But the Huskies will have to overcome an early blemish on their record to get into the playoff mix, and they failed to strike a blow for the Pac-12 Conference after its dismal 1-8 performance in last season's bowl games.
Auburn: The Tigers were eager to avoid another sluggish start. In 2017, they lost early on at Clemson and barely avoided an upset against FCS school Mercer. There are definitely some things to clean up, most notably 12 penalties for 111 yards, but it should be easier to do after a victory.
INJURY REPORT
Washington had to go without starting left tackle Trey Adams, who didn't make the trip to Atlanta because of a sore back after going down in 2017 with a season-ending knee injury. He was replaced by junior Jared Hilbers.
Auburn lost nickel back Javaris Davis to a left hand injury, sustained in the second quarter while trying to defend Fuller on a long fade route. The Auburn player was called for pass interference, but Fuller still managed to haul in a 42-yard completion. Davis was led straight to the locker room with a trainer delicately holding his hand.
ROOF CLOSED
There has yet to be a college football game held outdoors at Mercedes-Benz Stadium.
The roof is now in working order, but a sweltering day in Atlanta — the temperature was in the low-90s at kickoff — resulted in the camera lens-like structure remaining closed.
It was open Thursday night for an NFL preseason game.
UP NEXT
Washington: The Huskies return to Seattle to host FCS opponent North Dakota, which began its season with a 35-7 victory over Mississippi Valley State.
Auburn: The Tigers also face an FCS school, Alabama State, in their home opener at Jordan-Hare Stadium. It will be the first game between the schools, even though they are only about 50 miles apart.
___
Follow Paul Newberry on Twitter at www.twitter.com/pnewberry1963 . His work can be found at https://apnews.com/search/paul%20newberry
___
For more AP college football coverage: https://apnews.com/tag/Collegefootball and https://twitter.com/AP_Top25