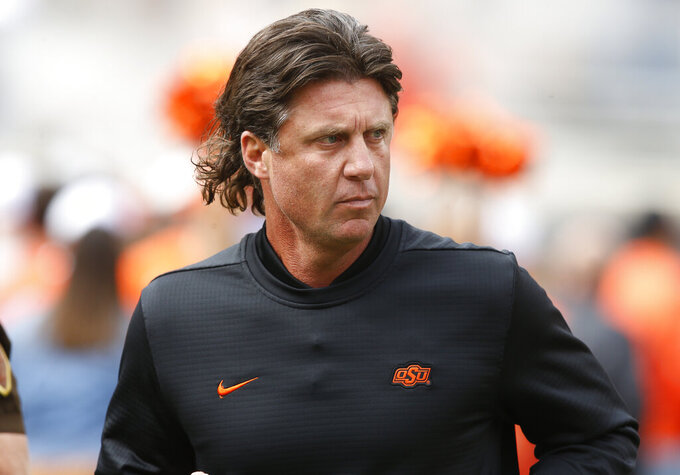 STILLWATER, Okla. (AP) — Oklahoma State coach Mike Gundy took a $1 million pay cut and had his contract shortened by a year as part of an internal review prompted by sharp criticism from his star running back for wearing a T-shirt promoting a far-right news channel.

Athletic director Mike Holder said Friday the adjustments to Gundy's contract were the coach's idea. Holder reiterated his belief Gundy has always treated Black players well a day after releasing a statement saying the review found “no sign or indication of racism” in the football program.

Two weeks ago, running back Chuba Hubbard lashed out at Gundy on social media for wearing a T-shirt promoting One America News Network. Hubbard, who is Black, suggested he may boycott the program; OANN has been critical of the Black Lives Matter movement.

“I think it’s awakened him or alerted him to the fact that he wasn’t as close as his players and he needs to be,” Holder said of Gundy. “He’s going to change that.”

Holder said Gundy's rollover contract was reduced from five years to four and the guarantee was cut from 75% to 50%. The buyout also was dropped from $5 million to $4 million. Holder didn't say whether the $1 million pay cut was a one-time arrangement or something that would happen annually.

“The changes were offered up by Mike Gundy, and I commend him for that,” Holder said. “I think it really demonstrates his commitment to being a better coach. And he wanted to make a statement that assured all players that this wasn't just about talk.”

Asked about Hubbard being criticized for lashing out at his coach publicly before speaking to him privately, Holder said he was glad Hubbard did speak out.

“All the players should be commended for having the courage to speak up,” Holder said. “We need more of that in society, not less. That doesn't mean the players are in control. There's a reason that adults are in the leadership positions."

Gundy, who is white, apologized after appearing with Hubbard in a video. Gundy also apologized in April after a media session in which he called the coronavirus the “Chinese virus.” Last week, the school announced a new diversity council that will include students, athletes and alumni.

Holder said he didn't keep track of how many athletes he interviewed following Hubbard's criticism, saying it was about 20. Holder said “the majority” of players interviewed were Black.

“The missing link has been a more personal relationship with their head coach,” Holder said. “They respect him. He’s an excellent game-day coach. But they want more coaching on a personal level. This crosses all racial lines. To a man, our players want a better connection to Mike Gundy.”