Pat Narduzzi: No plans to return to Michigan State football 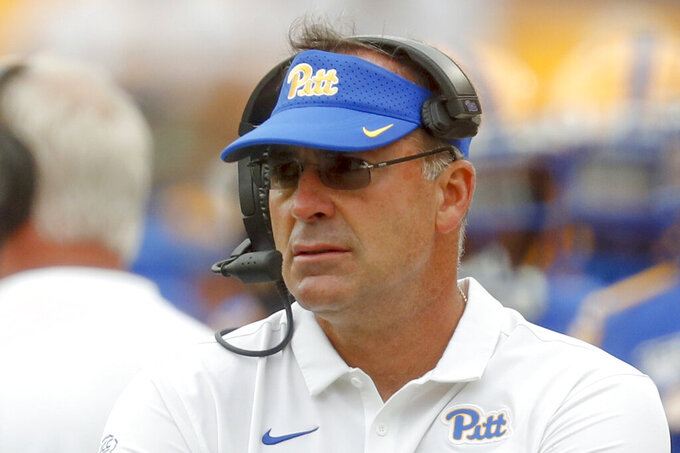 FILE - In this Sept. 7, 2019, file photo, Pittsburgh head coach Pat Narduzzi works the sideline during an NCAA college football game against Ohio in Pittsburgh. Narduzzi has no plans to head back to Michigan State, shooting down speculation he is interested in coaching the Spartans following longtime Michigan State coach Mark Dantonio's retirement. (AP Photo/Keith Srakocic, File)

PITTSBURGH (AP) — Pat Narduzzi considers Mark Dantonio a mentor. However, the Pittsburgh coach has no intentions of replacing him at Michigan State.

Stressing he wants to win championships with the Panthers, Narduzzi downplayed the idea he would leave Pitt to take over the Spartans. That's after Dantonio's stunning retirement on Tuesday.

“It's my ultimate goal to be here at Pitt,” Narduzzi said Wednesday. “I came here to get a job done. We're just working on continuing to move forward.”

Narduzzi declined to comment when asked if he had been contacted by Michigan State — where he served as an assistant under Dantonio for eight years before joining the Panthers in December 2014 — saying only “put it this way, my phone was blowing up last night.”

The list of people reaching out included Pitt chancellor Patrick Gallagher and athletic director Heather Lyke, both speaking to Narduzzi in the hours after Dantonio's decision to step away. Lyke and Narduzzi met in person on Wednesday morning and she watched later in the day as Narduzzi outlined why he wants to remain with the Panthers.

“I know what I'm dealing with here at Pitt,” Narduzzi said. “I know every day when I call up Heather Lyke and say, ‘How about this?' She's going to say, 'We'll get it done.' I just know that. I don't know that about any place else in the country like I know it here.”

Narduzzi is 36-29 in five seasons with the Panthers, including an Atlantic Coast Conference Coastal Division title in 2018. He's signed through 2024. Pitt is coming off an 8-5 mark in 2019 and has the majority of starters back on both sides of the ball, including second team All-American defensive tackle Jaylen Twyman, who opted to return for his redshirt junior season rather than go the NFL.

Still, Narduzzi's relationship with Dantonio stretches well over a decade. Dantonio hired Narduzzi to be the defensive coordinator when Dantonio took over at Cincinnati in 2004. Narduzzi followed Dantonio to Michigan State in 2007 and became one of the top defensive minds in the country, winning the Broyles Award as the nation's top assistant coach in 2013. They've kept in touch through the years, and Narduzzi called Dantonio “my head coach. He always will be.”

“You know how much success you had at another place, and you enjoyed it, too,” Narduzzi said. “If you didn't enjoy it, you wouldn't have stayed there for eight years. There's always that pull.”

A pull that apparently isn't quite strong enough to lure Narduzzi to East Lansing.

“Like I said, it's not an easy decision,” Narduzzi said. “It's not easy for Jaylen Twyman to say 'I'm not leaving, I'm staying.' When it comes down to it, it's about the people.”

People that include recruits. Narduzzi said he had a video chat with incoming kicker Ben Sauls, who contacted Narduzzi on Tuesday night as speculation swirled. Narduzzi chose to switch from a voice call to video so Sauls could look at Narduzzi's face as he spoke.

Lyke, who shared a fist bump with Narduzzi on Wednesday before speaking to reporters, is confident she won't be putting together a coaching search.

Asked if she and Narduzzi will revisit his contract in the coming days, Lyke said “we may evaluate that with him,” before adding "what he wants to do is take care of his players and his coaches. And that's the most important thing for him.”