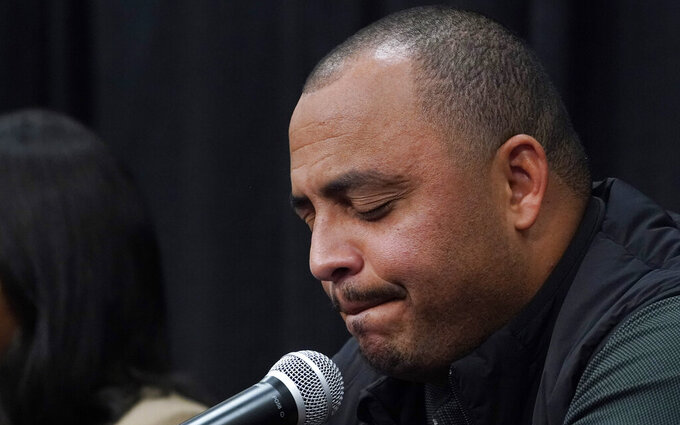 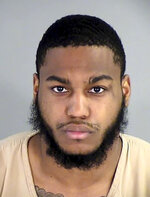 CHARLOTTESVILLE, Va. (AP) — A witness who saw a University of Virginia student open fire onboard a bus returning from a field trip told police the gunman targeted specific victims — many of them football players — shooting one as he slept, a prosecutor said in court Wednesday.

The details emerged during the suspect's first court appearance, the same day students returned to classes and the university announced it was canceling its Saturday football game in the wake of the deadly shooting.

A witness who was shown a photo of the shooting suspect, Christopher Darnell Jones Jr., identified him as the gunman, the prosecutor said. The violence Sunday night left three football players dead and one player and another student wounded.

Jones, a former football player, appeared by video link from a local jail for the court hearing Wednesday. He did not enter a plea to the numerous charges he faces and said he plans to hire an attorney. A judge ordered him held without bond and appointed a public defender to represent him until he secures private counsel.

University officials and police have said Jones, who turns 23 on Thursday, joined a group of about two dozen others on a field trip Sunday from the Charlottesville campus to see a play in the nation’s capital, about 120 miles (195 kilometers) away. When their bus arrived back on campus, authorities have said Jones opened fire, killing Lavel Davis Jr., D’Sean Perry and Devin Chandler.

Police have said Jones was able to flee the shooting scene, setting off a manhunt and 12-hour campus lockdown that left many students petrified. He faces three counts of second-degree murder, two counts of malicious wounding and additional gun-related charges.

The violence at the state’s flagship public university has set off days of mourning among students and faculty, the broader Charlottesville community and other supporters. Classes resumed Wednesday, as the school announced it was canceling its final home game of the season scheduled for the weekend against Coastal Carolina. No decision has been made yet about its final game of the season Nov. 26 against Virginia Tech in Blacksburg.

Students described a range of emotions as they returned to classes.

“It’s a pretty surreal experience, to be honest,” said Carter Paulen, a fourth-year student majoring in systems engineering and economics. “It’s good to see friendly faces, but I think everyone is trying to feel normal again in the face of all the adversity.”

Caden Kennedy, a second-year student, said many students returned to classes, "but there are some people who are home and need to be home.”

“I think the university itself is very aware of the fact that not everyone is ready to return,” Kennedy said. “Teachers are definitely trying to work with everyone where everyone is at.”

The university will not be requiring undergraduate students to complete any graded assignments or take exams before the Thanksgiving break. University President Jim Ryan has opened his on-campus home to students during the afternoons this week, and a memorial service for the victims is in the works.

One witness told police the suspect pointed the gun at Chandler, shot him as he was sleeping, and Chandler slid to the floor, Hingeley said.

The witness said Jones was “aiming at certain people” and not shooting randomly, according to Hingeley.

Ryan said Monday that authorities did not have a “full understanding” of the motive behind the shooting. Court documents have offered no additional insight, and Hingeley did not address a possible motive Wednesday.

The public defender appointed to represent Jones did not address the substance of the charges Wednesday. She also declined comment outside of court.

Jones, who has been in custody since he was arrested in suburban Richmond late Monday morning, appeared somber. He did not speak during the hearing except to respond to questions from the judge, including about his employment and ability to pay for an attorney.

Jones, a walk-on member of the football team during the 2018 season, had worked part-time for the Boys & Girls Clubs of Central Virginia since September, Kate Lambert, the group's CEO, confirmed in an emailed statement.

Hingeley also reviewed Jones’ past criminal record in court Wednesday. In February 2021, Jones was charged in Chesterfield County with possession of a concealed handgun without a permit and later given a 12-month suspended sentence, Hingeley said.

At the time of that arrest, Jones had two outstanding warrants in connection with a hit-and-run accident with property damage and reckless driving from Petersburg. He was convicted of both charges and also given 12-month suspended sentences on both, Hingeley said.

The university has said Jones’ failure to report the misdemeanor concealed weapon conviction was a consideration in an ongoing review of Jones by its threat-assessment team. The university initially said its student affairs office had escalated Jones' case in late October to the University Judiciary Committee, a student-run body that could have enacted disciplinary action. But late Tuesday night, spokesperson Brian Coy confirmed the university had not actually escalated the report. It finally did so Tuesday night, Coy said.

The university's governing board — the Board of Visitors — held an emergency meeting Wednesday to receive briefings from law enforcement, emergency management officials, staff members and legal counsel on the shooting and the investigation, according to a public agenda. The board held its meeting in executive session. The public was not allowed to be present, and a university spokesperson said board members would have no comment.

Of the two students who were hospitalized, one was discharged from the UVA Medical Center on Tuesday, according to Eric Swensen, a health system spokesperson.

A family spokesperson for Mike Hollins, a running back on the team who was shot in the back, said he was showing signs of improvement Tuesday after a second surgery. He was removed from a ventilator and was able to visit with family and friends in his hospital room, said Joe Gipson, the chief operating officer of a law firm in Baton Rouge, Louisiana, where Hollins’ mother, Brenda Hollins, works. Gipson later issued a statement reiterating that Hollins was going to approach his long recovery with the same tenacity he used on the field and in the classroom.