Sic 'em! Georgia climbs to No. 1 with defense for the ages 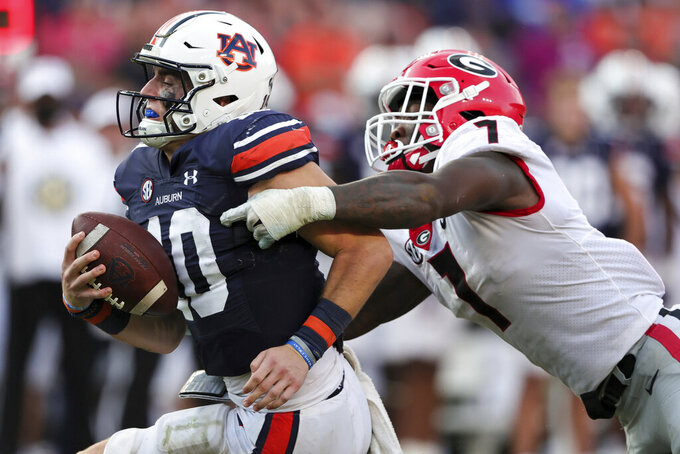 Auburn quarterback Bo Nix (10) is sacked by Georgia linebacker Quay Walker (7) during the second half of an NCAA college football game Saturday, Oct. 9, 2021, in Auburn, Ala. (AP Photo/Butch Dill)

ATHENS, Ga. (AP) — Georgia is back at No. 1 for the first time in more than a decade, led by a defense that looks like one for the ages.

The Bulldogs (6-0, 4-0 Southeastern Conference) have allowed a miniscule 5.5 points a game through the first half of the regular season — and that includes a pick-six when the defense wasn't even on the field.

No wonder Kentucky, off to its best start since 1950 and ranked No. 11, is a more than three-touchdown underdog heading into Saturday's showdown, according to FanDuel Sportsbook. It's a matchup that very well could determine the winner of the SEC East.

“They are playing at a ridiculous level defensively,” Wildcats coach Mark Stoops said.

With future NFL draft picks all over the field, Georgia's defense has surrendered two touchdowns and 26 points.

They have a chance to be remembered as one of the truly elite units of the modern era. Over the last 20 years, only three teams have allowed less that 10 points a game, most recently Alabama in 2011 (7.7).

In today's high-scoring game, with spread offenses and run-pass options, it's truly a throwback to see a team play defense like the Bulldogs.

They have allowed the fewest yards overall (201.2 per game), the fewest passing yards (137.0), the fourth-fewest rushing yards (64.2). They lead the SEC with 22 sacks and have hurried opposing quarterbacks 109 times — an astonishing average of 18.2 each time out.

The Bulldogs have so many defensive weapons that no one really stands out.

“There’s not really anyone out there that’s saying, ‘Look at me, look at me, I need more attention,'” coach Kirby Smart said. "They want to win, is what they want to do, and that’s what matters.”

After Alabama's upset loss at Texas A&M last weekend, Georgia was a unanimous choice for No. 1 in The Association Press poll — the first time the Bulldogs have been in that spot since the preseason of 2008.

One must go all the way back to 1982 to find the last time Georgia was ranked No. 1 during the season.

None of that really matters, of course. The only ranking that counts is the one at the end.

“Don’t try and change it up, don’t try and be someone you’re not,” linebacker Adam Anderson said. “Don’t let being No. 1 influence how you play them.”

Georgia's only close call was a 10-3 victory over Clemson in the season opener. Since then, the Bulldogs have routed their opponents by an average margin of 39.8 points.

Just two weeks ago, Georgia met another surprising team that was undefeated and ranked in the top 10.

Kentucky (6-0, 4-0) hopes to avoid a similar fate and show it's more than a basketball school.

”I know every time we break it down, we always talk about Atlanta," safety Yusuf Corker said, referring to the site of the SEC championship game. “This time, we’ve got a chance to really go do it.”

Things to watch for when the Bulldogs host the Wildcats between the hedges:

Stetson Bennett started the last two games at quarterback for Georgia in place of JT Daniels, who's been sidelined with a strained lat muscle.

Daniels threw some balls in practice this week and was feeling less soreness, but it will be a game-time decision whether he can go against the Wildcats.

The Bulldogs should be just fine if Bennett has to take the snaps again.

The senior has started a total of three games this season because of Daniels' injuries, completing nearly 70% of his passes for 746 yards with eight touchdowns and two interceptions. Bennett also has shown the ability to create plays with his legs, averaging 7.9 yards on 16 carries.

“I don’t think the team has ever lacked confidence in Stetson,” Smart said. “There’s no question mark there.”

Kentucky’s defense lost another key starter when end Octavious Oxendine, who earned SEC co-defensive lineman honors this season, was declared out for the season with a lower leg injury.

With top receiver George Pickens sidelined by a knee injury, Georgia has gotten pretty much everyone involved in the passing game.

The Wildcats rushed for 330 yards in last week's 42-21 victory over LSU, their second-highest output of the season.

Georgia has dominated this series, holding a 60-12-2 edge over Kentucky.

The Wildcats' last victory against the Bulldogs came in 2009. Since then, Georgia has won 11 in a row — with only three of those games decided by fewer that 10 points.