Some Big 12 players expected to impact their teams in 2021 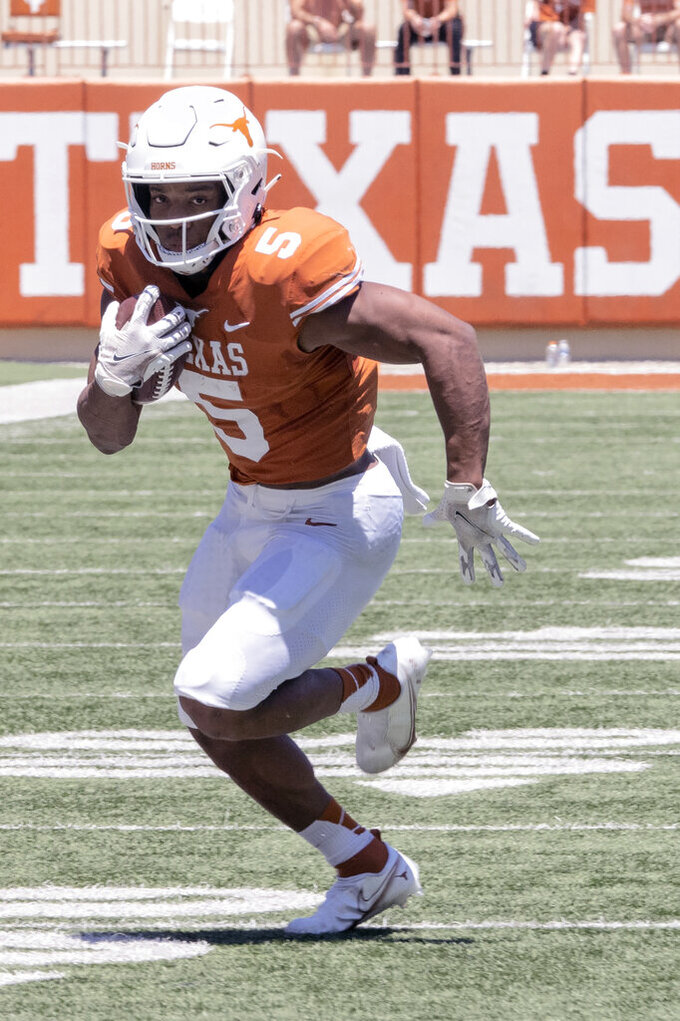 FILE - Texas running back Bijan Robinson (5) runs during the final half of the Texas Orange and White Spring Scrimmage in Austin, Texas, in this Saturday, April 24, 2021, file photo. No player frustrated Texas fans last season more than tailback Bijan Robinson. Not because of anything he did, but because of Herman’s odd refusal to give him the ball more often. (AP Photo/Michael Thomas, File)

Some Big 12 Conference players expected to have impact seasons for their teams in 2021:

Nose tackle Siaki Ika, sophomore. The LSU transfer played in 13 games as part of a rotation at nose tackle and had 17 tackles as a true freshman on the Tigers’ 2019 national championship team, when second-year Baylor head coach Dave Aranda was LSU’s defensive coordinator. The 6-foot-4, 350-pound Ika should be a force in the middle for the Bears, and is a huge boost on the defensive front that was lacking experience.

Tight end Easton Dean, sophomore. The 6-foot-6, 251-pound Dean played quarterback in high school, but was switched to TE upon his arrival in Ames. Coach Matt Campbell declared then that Dean would “be the best tight end we’ve ever had here.” Dean now gets the chance to show it with Dylan Soehner’s departure. The Cyclones love to line up with three tight ends, and Dean should be in that group with stars Charlie Kolar and Chase Allen.

Defensive back Karon Prunty, sophomore. Prunty forced a fumble and intercepted a pass, both career firsts, in the final game of his true freshman season. He had 26 tackles and 10 pass breakups while starting all nine game, and didn’t allow a touchdown pass.

Running back Deuce Vaughn, sophomore. Vaughn had quite an introduction to the Big 12 last season, leading the Wildcats as a true freshman in rushing yards (642) and receiving yards (434), while also having seven kickoff returns for 145 yards. Vaughn could have the ability to be even more versatile with the return of running back Joe Ervin, who opted out of playing last season after playing in four games in 2019.

Running back Kennedy Brooks, junior. After opting out last season, Brooks is back just in time after the Sooners lost Rhamondre Stevenson (declared for NFL draft) and TJ Pledger (transferred to Utah). A second-team AP All-Big 12 pick as a sophomore in 2019, Brooks had 2,067 yards and 18 TDs rushing over consecutive 1,000-yard seasons. The Sooners also have junior Tennessee transfer Eric Gray and three returning sophomores.

Linebacker Malcolm Rodriguez, senior. Rodriguez took advantage of the extra year and is back after leading the Cowboys in tackles the past two seasons. His 58 solo tackles led all Power Five linebackers in 2020, when he finished with 82 total tackles, seven tackles for loss, three sacks and three pass breakups. As a junior, he led the team with 103 tackles and was named the team’s defensive MVP.

Running back Zach Evans, sophomore. The first five-star recruit ever to sign with the Horned Frogs, Evans averaged 7.7 yards per carry (414 yards rushing on 54 carries) with four touchdowns as a true freshman last season. Among six sophomore running backs on TCU’s roster, Evans ran for 264 yards and three touchdowns on 29 carries the last three games, with two 100-yard games in that span.

Wide receiver Troy Omeire, redshirt freshman. There were several circus catches in preseason practice last year for the 6-foot-3, 227-pound Omeire, who along his big size has speed. But the four-star recruit missed his first season in Austin because of a torn ACL in his right knee, a non-contact injury in the first Texas scrimmage in mid-August.

Wide receiver Eric Ezukanma, junior. This could be the real breakout season for the 6-foot-3 receiver who led the Red Raiders with 46 catches for 748 yards and six TDs last season, and was second in the Big 12 with 74.8 yards receiving per game. He now could be the top target for Oregon transfer quarterback Tyler Shough, especially with the departures of receivers Ja’Lynn Polk (to Washington) and KeSean Carter (to Houston).

Running back Leddie Brown, senior. West Virginia wants to do more than just hand the ball to Brown, who ran for 1,010 yards last season and was one of only two Big 12 running backs to average 100 yards per game. The 6-foot, 212-pound Brown was also the Mountaineers’ second-leading receiver with 31 catches for 202 yards and two touchdowns.