Stakes couldn't get much higher for 'The Game' this time 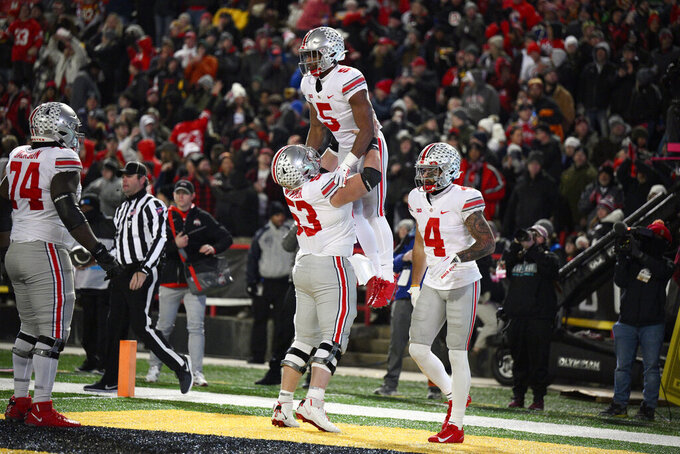 Simply put, the entire season. The year's version of The Game is huge. Both teams are undefeated and have national championships hopes that could be ruined with a loss. The Buckeyes have revenge on their minds. They went to Ann Arbor as No. 2 last year and were routed by No. 5 Michigan 42-27. That snapped an eight-game skid in the rivalry game. The Wolverines became Big Ten champions with a win over Iowa before losing to Georgia, the eventual national champion, in a College Football Playoff semifinal. Ohio State's high-flying offense is averaging 46.5 points per game, tying it with Tennessee for the most in the nation. Michigan will counter with the nation's best defense, which is holding opponents to about 12 points per game.

Ohio St. QB C.J. Stroud vs. Michigan defense. Stroud has thrown for nearly 3,000 yards and his 35 touchdowns tie him with Houston's Clayton Tune for most in the country. Stroud was less than sharp last week as the Buckeyes struggled with Maryland. The Michigan defense has been stellar but allowed Illinois' Chase Brown run for 140 yards and two touchdowns. The Wolverines needed a late field goal to stay undefeated.

Michigan: RB Blake Corum left last week's game with an apparent knee injury in the second quarter. He said after the game that he's fine. Coach Jim Harbaugh doesn't talk about player health, so it's anybody's guess how much of a weapon Corum will be against the Buckeyes.

Ohio State: With RBs TreVeyon Henderson and Miyan Williams battling injuries, true freshman Dallen Hayden has been thrust into the starter's role. He responded with his second 100-yard game in a row last week, carrying 27 times for 146 yards and three touchdowns against Maryland.

Michigan's 42-27 win last year broke an eight-game win streak by the Buckeyes in the rivalry game. ... The winner of the game clinches the Big Ten East and will play either Iowa or Purdue in the conference championship game. ... Stroud was 18 for 30 for 241 yards and a touchdown in Ohio State’s 43-30 win over Maryland last week. ... Corum had 103 rushing yards — his eighth 100-yard game this season — and a touchdown before leaving with an apparent knee injury in the second quarter. ... Michigan RB Donovan Edwards is also sidelined with an unspecified injury. ... J.J. McCarthy was uneven against Illinois, completing 18 of his 34 pass attempts for 208 yards. ... The Wolverines are 11-0 for the first time in Harbaugh's eight seasons. ... Michigan has won more games in the last two seasons (23) that during any two-year span in school history. ... Wolverines K Jake Moody leads the NCAA in points (122) and field goals per game (2.27 average).