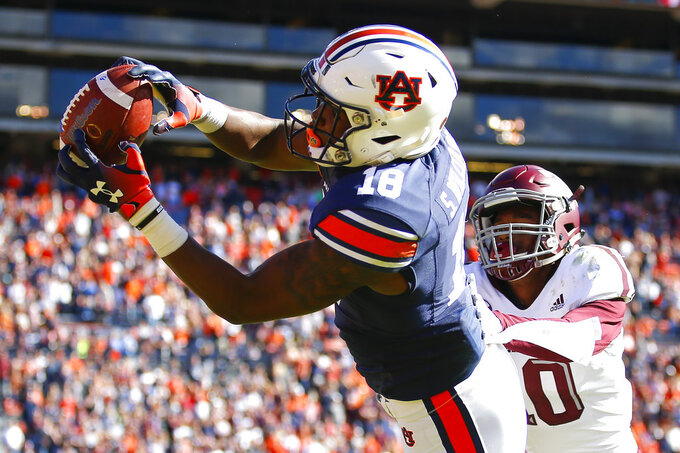 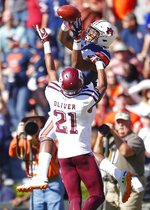 AUBURN, Ala. (AP) — Seth Williams figures there's only one likely outcome on a mid-air battle for the ball, and it's exactly what happened with the game in the balance.

The Auburn freshman came down with an 11-yard touchdown pass from Jarrett Stidham with 1:41 left and the Tigers rallied to beat No. 25 Texas A&M 28-24 on Saturday.

"Zero chance I wasn't coming down with it," Williams said. "It's going to come down with me if it's up in the air."

The Tigers (6-3, 3-3 Southeastern Conference) sputtered early on offense but finished with a 14-point outburst over the final 5:14 and the defense came up with big stops. Stidham delivered big plays on both final drives.

Kellen Mond and the Aggies (5-4, 3-3) pushed the ball into Auburn territory on their final drive, converting a fourth-and-5. Then a holding call pushed them back across midfield and Mond's desperation pass to the end zone was incomplete.

Officials put one second back on the clock but Mond was sacked by Nick Coe on the final play.

"You think the game's over," Auburn coach Gus Malzahn said. "The game's over, you shake the other coach's hand ... and then they tell you to come back out."

The Tigers, who had plummeted from a No. 8 ranking, trailed 24-14 before staging the rally. Texas A&M had missed a late field goal following another defensive stand.

Stidham started the final drive with a 47-yard pass to Ryan Davis, who spun away from defenders and raced downfield. Then came Williams' second 11-yard touchdown catch of the day, in the back corner of the end zone.

Auburn had gotten new life with the first career interception by Noah Igbinoghene on what Malzahn called "probably the play of the game." Stidham led the Tigers down the field and completed two straight sideline passes to Darius Slayton to set up Chandler Cox's 1-yard touchdown run, making it 24-21.

The defense held again and Christian Tutt returned a punt to the 42.

"We knew if we left any life in them, they were going to fight, scratch and claw," Texas A&M coach Jimbo Fisher said. "That's what they always do, and we did that. We played excellent football for three quarters."

Auburn won despite running for just 19 yards on 21 carries. It was the fewest by the Tigers since gaining 18 against Mississippi State in 2000.

Trayveon Williams ran for 107 yards and two touchdowns for Texas A&M. He caught five passes for 75 yards and a third score.

"It's a tough way to lose, to dominate the whole game like that," Aggies defensive lineman Landis Durham said. "We preach and preach to finish, and we fell short of that. Now we're hurt."

Texas A&M: Didn't complete a pass until the final play of the first quarter, with Auburn unable to stop the run. Dropped its second straight game. Had a 38:41-21:19 advantage in time of possession.

Stidham, a Texas native, took special pleasure in beating a home state team. "Any time I can beat the Aggies, it's a great day in my book," he said.

Auburn got its first touchdown when receiver Ryan Davis hit Sal Cannella for a 20-yard touchdown on a double pass. That came one play after the Tigers recovered a botched pitch by Kellen Mond.

The two coaches' only head-to-head meeting came in the national championship game to end the 2013 season. Fisher's Florida State team scored in the final seconds to win 34-31.

"This was a different kind of game," Malzahn said. "It was completely different."

Auburn visits No. 6 Georgia after upsetting the Bulldogs last season before losing to them in the SEC championship game.