Syracuse's Dino Babers, a wanderer who's found a home 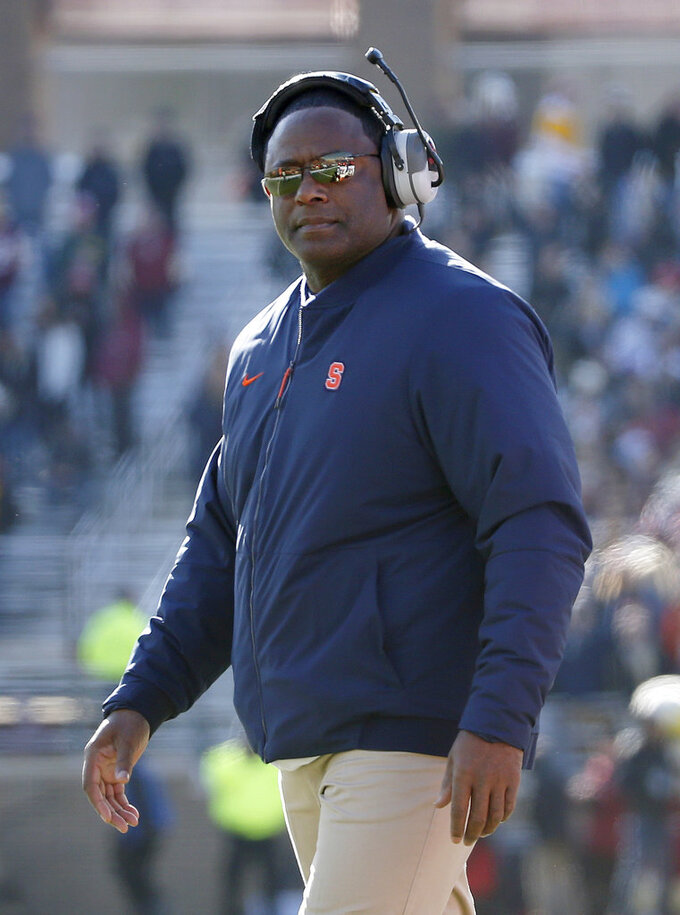 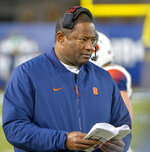 When Dino Babers was fresh from being named the football coach at Syracuse, he introduced himself to the Orange faithful at halftime of a basketball game. It's a moment forever etched in his memory.

Those were his last words that January night in 2016 inside the Carrier Dome, and after a couple of 4-8 seasons Babers has delivered on that promise. The high-scoring Orange (9-3) are ranked No. 17 and chasing only the seventh double-digit win season in program history as they get set to face No. 15 West Virginia (8-3) in the Camping World Bowl on Friday in Orlando, Florida.

"Winning nine games with a chance to win 10 is a huge deal for a program like Syracuse that had fallen on hard times," said Dick Tomey, who coached Babers in college and gave him his first coaching job more than three decades ago. "I just think it's a tremendous accomplishment. I think it's certainly something that many of us that knew him expected."

It's a defining moment in the career of a coaching nomad, who at a young age began searching for his calling in life and found it more quickly than most.

The son of a Navy veteran, Babers began watching his dad play football at bases around the country during free time away from doing duty on an aircraft carrier. The kid relished every moment.

"I grew up being part of the chains crew. I fell in love with the technical part of the game," Babers said. "My dad was the fullback and my uncle was the quarterback. I thought it was really interesting listening to those guys talk on the sideline about what could work and what could not work. That kind of got me going in it."

Babers' career as a player also helped lay the groundwork for his success as a coach. He played offense and defense in both high school and later in college at Hawaii under Tomey from 1979-83.

"Dino was a damn good player," Tomey said. "He did everything to try to help the team, and I believe that those kind of guys make the best coaches."

After a torn ACL ended his playing career — he played his entire senior year at Hawaii with the injury before being cut by the BC Lions of the Canadian Football League — Tomey hired Babers as a graduate assistant in 1984.

Mirroring the experiences of his youth — his family moved several times whenever his dad was transferred — Babers has had 15 stops in 35 seasons as a coach at 14 schools and early on included eight straight losing years, 1-10 at Purdue in 1993 the worst.

If there was any self-doubt, it was kept inside.

"The Purdue thing was really tough," Babers said. "The losing was driving me crazy. It was literally to the point where I didn't want to talk to any of the coaches."

Babers was reunited with Tomey at Arizona in 1995 and three years later the Wildcats finished 12-1 with Babers serving as offensive coordinator. After another bump in the road — Babers took over as offensive coordinator at Texas A&M in 2001 and was demoted the next year when the offense stalled — he was hired by Art Briles at Baylor in 2008.

Great success there with Briles' revolutionary spread offense made Babers an attractive candidate to become a head coach and Eastern Illinois of the Championship Subdivision gave him that first shot. He went 19-7 in two seasons with Jimmy Garoppolo at quarterback, followed by an 18-9 mark in two seasons at Bowling Green, both stints punctuated by a dominating spread offense.

"He's very honest. There's only black or white with coach, there's no gray area," said Garoppolo, now with the NFL's San Francisco 49ers. "He had a lot of energy. That offense they run is dynamic, and he makes it fun at the same time, which I think is important."

Syracuse had had only three winning seasons since 2001 before Babers arrived and was a laughingstock of sorts nationally. Upset victories in his first two seasons over ACC stalwarts Virginia Tech and Clemson and this year over Florida State, and the ensuing locker room rants that went viral , sent a signal that change was imminent as the team embraced Babers' emphasis on family.

The success this season — Syracuse finished 6-2 in ACC play and was runner-up to No. 2 Clemson in the Atlantic Division after being picked for last in preseason — resulted in a contract extension that should keep the 57-year-old Babers around for a while.

"It's nice to know that you're wanted," he said.