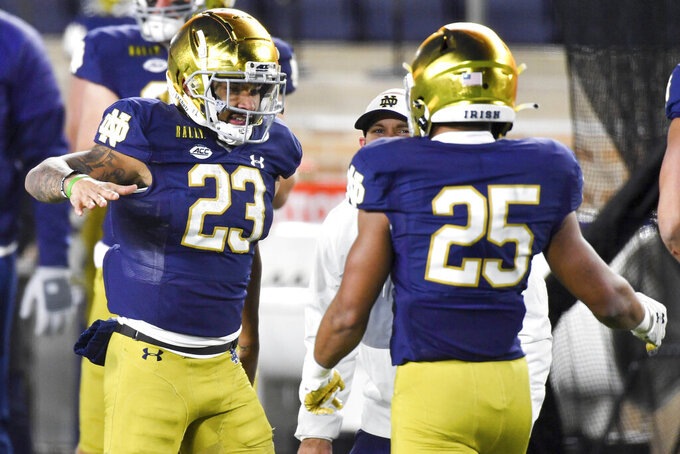 For the third straight week, Alabama, Notre Dame, Clemson and Ohio State held on to the top four spots in the College Football Playoff rankings.

The selection committee's second-from-last rankings had only a little movement in the top 10. Texas A&M is still fifth and Florida held at sixth.

Iowa State moved up a couple of spots to seventh after earning a spot in the Big 12 title game. Cincinnati slipped a spot to eighth after an idle week because of COVID-19 issues in the program.

The Bearcats also will not play this week against Tulsa, the committee's 24th-ranked team. Those two schools are scheduled to meet Dec. 19 in the American Athletic Conference title game.

Ohio State is also currently without a game this weekend after Michigan had to cancel because of a COVID-19 outbreak.

The Buckeyes had to cancel their game two Saturdays ago because of their own virus issues. Last week they beat Michigan State 52-12 without more than a dozen scholarship players, including three starting offensive linemen.

Georgia is ninth and Miami is 10th.

Coastal Carolina, coming off a big victory against BYU, jumped five spots to No. 13.

Barta is also the athletic director at Iowa, a member of the Big Ten.

The Big Ten currently has a bit of dilemma on its hands. Ohio State (5-0) might not play enough games to be eligible to play in the Big Ten championship game.

As part of his real job, Barta will meet with his colleagues in the Big Ten on Wednesday, a regularly scheduled meeting. Barta said he does not know the agenda of that meeting and declined to speculate, but it doesn't seem to be stretch to think that Ohio State's situation will come up.

Should the Big Ten try to shuffle this week's schedule to get Ohio State an opponent? Should the ADs who made the minimum games rule way back in the summer when the conference first started altering its schedule to deal with the pandemic simply change the rule to let Ohio State play for the title?

Or keep it the way it is and match up Ohio State with the second-best team in the West Division, likely Iowa, on the weekend of Dec. 19 while Northwestern and Indiana play in the Big Ten championship game?

That's if Indiana can play. The Hoosiers paused team activities Tuesday because of COVID-19 cases.

The Big Ten ADs not only have to figure out what is fair to Ohio State and the rest of the conference, they also must consider how best to protect the integrity and value of their league championship game.

On top of that, they also should be thinking about what is the best way to put the Buckeyes in position to be picked for the playoff by the selection committee.

And one of the people helping to make those decisions is Barta, who should have a pretty good idea of how the committee views Ohio State.

How will Barta deal with this?