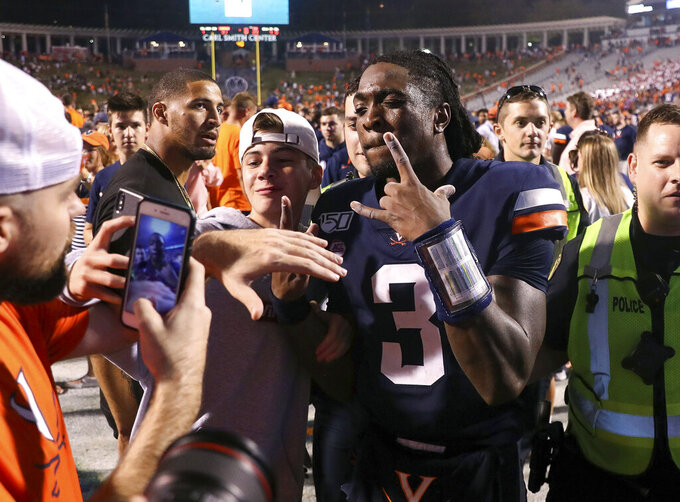 No. 18 Virginia at No. 10 Notre Dame. The Cavaliers (4-0) will try to do something no Atlantic Coast Conference team has ever done — beat a ranked Notre Dame team in South Bend. ACC teams are winless in 20 tries against Top 25 Fighting Irish teams, and coach Brian Kelly's team figures to be smarting from its high-profile loss at No. 3 Georgia. Virginia is off to its best start since 2004.

Temple passing offense vs. Georgia Tech pass defense. Yellow Jackets coach Geoff Collins is headed back to Philadelphia to face the team he left less than a year ago — and his old team is a 9½-point favorite. One matchup to keep an eye on is when Temple airs it out. The Owls rank ninth nationally in passing offense, rolling up 347 yards per game. One of the few things to go right during this rebuild for Georgia Tech (1-2) is defending the pass, with the Yellow Jackets (1-2) allowing 140 yards per game — though that average has been skewed by a loss to run-based Citadel.

Florida State and North Carolina State might want to call off their game at halftime because both teams have struggled in the second halves. The Seminoles (2-2, 1-1) through four games have been outscored by a combined 92-45 after halftime. The Wolfpack (3-1) have been outscored 42-37 after halftime in three games against FBS opponents, and in their last two games have scored on just four of 15 second-half possessions (two touchdowns, two field goals).

Boston College might be able to spoil Wake Forest's unbeaten start as a 6½-point home underdog. The Eagles (3-1, 1-0) slipped a bit from the national consciousness following their surprising loss to Kansas, but bounced back to beat Rutgers. The Demon Deacons (4-0) raced out to early two-touchdown leads on each of their last three opponents, but BC — which won at Wake Forest a year ago — and AJ Dillon will try to control the ball and the clock against coach Dave Clawson's quick-strike offense.

Pittsburgh quarterback Kenny Pickett put on a show in the Panthers' upset of No. 15 Central Florida. Pickett threw for 224 yards and a touchdown, rushed for 61 more yards and caught the winning touchdown pass on a trick play dubbed the "Pitt Special." Pickett averages 275.5 yards passing — second only to Wake Forest's Jamie Newman — and should have plenty of opportunities to pad those stats this week against Delaware of the FCS.