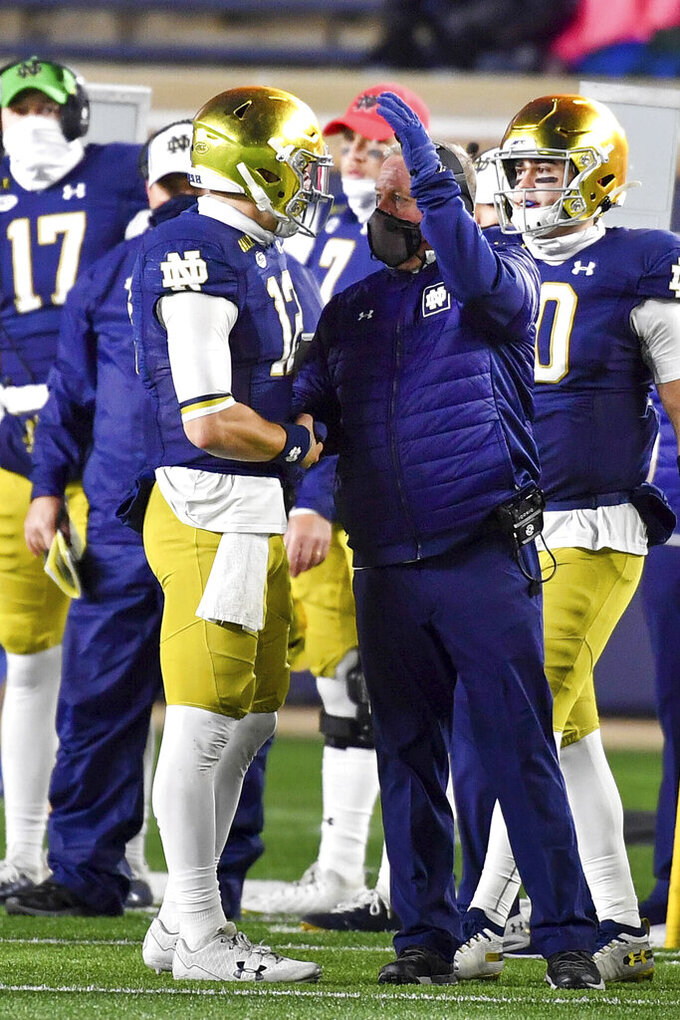 Notre Dame quarterback Ian Book (12) is greeted by coach Brian Kelly after coming out of the game during the fourth quarter of the team's NCAA college football game against Syracuse on Saturday, Dec. 5, 2020, in South Bend, Ind. (Matt Cashore/Pool Photo via AP)

Lawrence is expected to play a major role in what happens in the rematch when the second-ranked Fighting Irish (10-0, 9-0 ACC; No. 2 CFP) take on No. 4 Clemson (9-1, 8-1; No. 3 CFP) in the ACC championship game on Saturday in Charlotte, North Carolina.

Sidelined with COVID-19, Lawrence was a spectator in Notre Dame's 47-40 double-overtime victory in November — Clemson's lone loss this season. Lawrence traveled with the team to Indiana and gave advice to his backup, freshman DJ Uiagalelei, throughout the game.

It gave Lawrence a perspective of the game he usually doesn't have and it left im very impressed with Book's play.

“In big games like that, a quarterback has to play well to win and he played great,” Lawrence said. “He extended plays really well, made some big throws. I've got a lot of respect for him.”

It was a huge game, and there may be even more on the line this time.

Lawrence will look to lead the Tigers to a sixth consecutive league championship game — an unprecedented feat in the Power Five era. Fans should expect him to lead the way with his calm demeanor, strong arm and knack for making big plays at the most important times.

Notre Dame coach Brian Kelly said his team has heard too often about Lawrence's absence in that first game; he's eager to face a healthy Lawrence.

“We recognize (Lawrence) is a great football player, and to have him on the field certainly is what you want in the championship game,” Kelly said.

Especially with Book on the other side. He is a savvy, fifth-year player who is 30-3 as a starter in his Notre Dame career — the second highest winning percentage in college to Lawrence's 33-1 mark.

Book passed on the NFL last season for a final year with the Irish and has made the most of that decision, leading his team to the brink of their second College Football Playoff appearance in three seasons.

He's thrown for 2,382 yards and 15 touchdowns against two interceptions. Book has also rushed for 465 yards and eight TDs in the Fighting Irish's second 10-0 start in three seasons. Book and Notre Dame were 12-0 in 2018 before the perfect season ended with a thud, a 30-3 loss in the Cotton Bowl against Clemson and Lawrence. The Tigers went on to win the national championship.

Book wants to add a national title of his own to his college legacy, a quest that could include an ACC title.

“If you hear my name, that is what you think of,” Book said of not winning a championship. “We still have to go do that, so that’s what I want.”

Lawrence knows how it feels to hold that trophy. He also knows the disappointment of coming up short. Last year, Clemson lost 42-25 to LSU in what was Lawrence's poorest college showing. Lawrence has used it as motivation for wanting to play amid the coronavirus pandemic and not opting out to protect his future as the expected No. 1 overall pick in the upcoming NFL draft.

Clemson coach Dabo Swinney said it is difficult to list all of Lawrence's superlatives because it would “take all day and half of the next.”

But there are couple that stand out:

— Lawrence is second in the ACC with 2,483 yards and 20 touchdowns, despite playing three fewer games (two out with COVID-19, the other a canceled contest at Florida State due to the virus).

— He leads the league in completion percentage, continually playing at high level amid questions about his NFL future, his illness and issues include social and racial injustice.

Book met Lawrence a few ago when they were both at the Manning Passing Academy. Book got to know him somewhat when they both coached seven-on-seven clubs that wound up facing each other — Lawrence’s team won, Book recalled.

Lawrence, 21, will graduate Thursday with a bachelor's degree in marketing. With his academic requirements complete, his focus is not on revenge for the loss earlier this season, but another championship.

“Usually I'm on the good side of games, we win,” Lawrence said. “But after losing that game (at Notre Dame), it's really good we've got a chance to play them again. It's really rare and we're grateful for that."