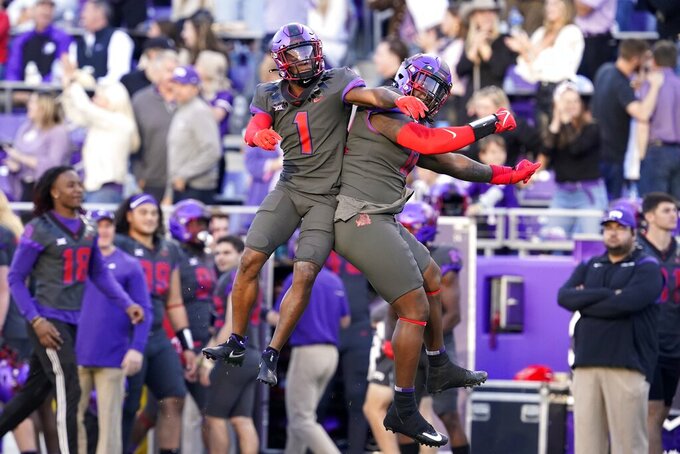 TCU cornerback Tre'Vius Hodges-Tomlinson (1) and defensive tackle Kenny Turnier, right, celebrate after Hodges-Tomlinson broke up a Baylor pass that was then intercepted by teammate cornerback Kee'Yon Stewart in the second half of an NCAA college football game in Fort Worth, Texas, Saturday, Nov. 6, 2021. (AP Photo/Tony Gutierrez)

KANSAS CITY, Mo. (AP) — The bizarre nature of the college football season in the Big 12 can be summed up by the fact that TCU and Texas Tech, both having already fired their coaches, could be headed to bowl games in a few short weeks.

In fact, half the league's 10 schools already have reached the six-win threshold after Kansas State handled Kansas and Iowa State romped past Texas last weekend. They joined fourth-ranked Oklahoma, which at 9-0 is eyeing a spot in the college football playoff, 10th-ranked Oklahoma State and No. 18 Baylor in ensuring they'll be playing in the postseason.

“So excited for our guys, to be 6-3 and bowl-eligible,” said Wildcats coach Chris Klieman, whose team lost its first three Big 12 games. “It tells you an awful lot about the character and resolve of our guys, when we started off the way we started in conference and there was always continued belief in that locker room.”

The Wildcats aren't the only ones rebounding, either.

Fresh off parting with longtime coach Gary Patterson, TCU and interim coach Jerry Kill pulled off a 30-28 upset of Baylor to match Texas and West Virginia with four wins apiece.

“I’m old and I’ve been through a lot of ball games,” Kill said afterward, “and I don’t know if I’ve ever seen a team with a more deserving group of kids having to go through what they did. ... I’m just so proud of those kids.”

“We truly deserved that win," TCU quarterback Chandler Morris said. “We know we can compete with anyone in the country, and I feel like we’ve been defeating ourselves up to this point and this was a great statement win.”

This season has hardly gone the way Steve Sarkisian envisioned when he took over Texas, especially when the Longhorns played Oklahoma to the wire in a 55-48 loss in early October. But that began a streak of four straight losses, and now they have to pick up two wins against Kansas, West Virginia and Kansas State to make a bowl game.

Speaking of the Mountaineers, they looked as if they were trending up after back-to-back wins over TCU and Iowa State had evened their record. But they were humbled by the Cowboys in a 24-3 loss in Morgantown, and now the rebuilding Mountaineers still needi a pair of wins to reach bowl-eligibility.

What a difference a couple of weeks make at Texas Tech.

The Red Raiders started 5-2 under embattled coach Matt Wells, but a squeaker of a loss to Kansas State gave athletic director Kirby Hocutt the opening necessary to fire him. Sonny Cumbie was given the job on an interim basis, but Hocutt wasted no time in hiring Baylor associate coach Joey McGuire as the full-time guy.

Cumbie will finish the regular season and any potential bowl game — yes, one more win sends the Red Raiders to a nice reward in a trying season — while McGuire will work behind the scenes until taking over next season.

So if everything plays out right, the Big 12 could send nine of its 10 teams to bowl games — with some finessing.

The league has a spot in the Sugar Bowl opposite an SEC opponent, and tie-ins to the Alamo, Cheez-It, Texas, Liberty, Guaranteed Rate, Armed Forces and First Responder bowls. That would be enough spots for eight teams.

The Sooners could win out and land in the four-team playoff, kicking the Big 12's runner-up to the Sugar Bowl and giving it nine spots. Otherwise, the league would need to hope another conference doesn't fill its bowl quota.

Regardless, reaching a bowl game remains a very tangible reward for nearly all the Big 12.

“There's maybe five to seven players on our team that have been to a bowl game at Texas Tech,” Cumbie said. “When you're not in a bowl game and the people in our league are, they're getting 15 practices you're not. So that's an opportunity for us to continue to develop our roster, and also a reward. A lot of players here have gone through a lot of adversity. They have weathered the storm, haven't backed down, and you want to reward them.”