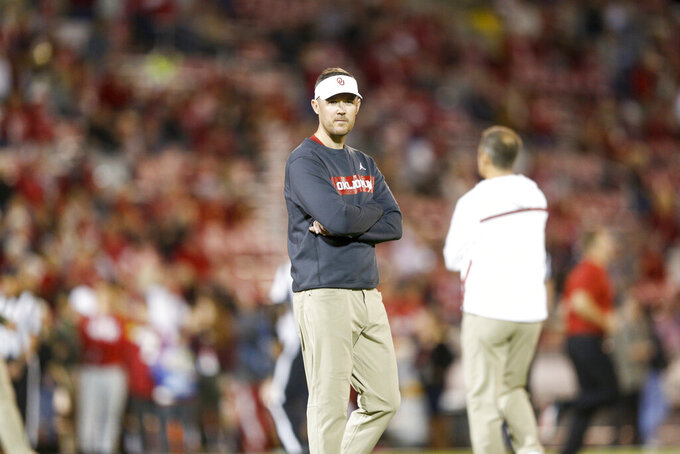 WACO, Texas (AP) — No. 12 Baylor has been quite defensive and kept things close to stay undefeated. No. 10 Oklahoma just keeps winning November games, even when needing a big escape.

“It's a lot at stake, honestly. We've got to go there with the right mindset that we're going to handle business and get out of there,” said Oklahoma receiver CeeDee Lamb, the national leader with 13 touchdown catches. “But it's going to take a lot more than just the right mindset. You have to go out there and play physical football and mentally be mistake-free.”

Baylor, with an 11-game winning streak, and Oklahoma are the Big 12’s last hopes of getting into the College Football Playoff. The four-time defending conference champion Sooners will have to win out just to have a chance to make its fourth national semifinal in five seasons.

The Sooners have won 18 November games in a row since a home loss to Baylor in 2014, when the Bears were the last team other than OU to win the Big 12 title. Oklahoma could still lose and get to the Big 12 title game with the head-to-head tiebreaker over No. 22 Texas, the only other team with fewer than three conference losses.

Oklahoma is suddenly giving up a lot of points again. After their 48-41 loss at Kansas State, the Sooners won 42-41 at home last week when Iowa State got stopped on a 2-point conversion in the closing seconds.

With dual-threat quarterback Jalen Hurts, the Sooners still are the Big 12’s highest-scoring team with 48 points a game. They lead the nation with 598 total yards a game.

“He’s able to move around and keep plays extended, he can extend drives,” Baylor coach Matt Rhule said of Hurts. “He’s a great runner, has a great vision. He’s accurate, he can do it a multitude of different ways.”

The Sooners offense presents quite a challenge for Baylor, which has allowed more than 20 points in regulation only once and leads the Big 12 giving up 19 points a game. The Bears have held teams to 337 total yards a game.

Last Saturday, Baylor needed triple overtime to win 29-23 at TCU — the Bears made a 51-yard field goal in the final minute of regulation for a 9-9 tie just for the chance to stay undefeated. It was their second OT win, and fourth time in their six Big 12 games they trail ed in the fourth quarter. They were tied in the fourth quarter of another.

"I don't know that I love it, let me say that,” Rhule said, when asked if it’s stressful to be in so many close games. “It's funny, my dad said ... '20 years from now, when these guys come back, they'll remember this game.’”

A rare win over Oklahoma would certainly be remembered. The Sooners have a 25-3 series advantage, but all of Baylor’s wins have been significant, and not all that long ago.

There was the 2011 prime-time win that clinched the Heisman Trophy for quarterback Robert Griffin III. The wins in 2013 and 2014 came in Baylor’s only Big 12 championship seasons.

The Sooners are facing an undefeated team nine games or more into a season for the seventh time since 1980. They are 2-4 in those games, the last in 2008 when they beat then-No. 2 Texas Tech 65-21. The other five times were all against Nebraska the old Big Eight Conference.

This will be the 37th time that ESPN will broadcast its “College Game Day” show from the site of an Oklahoma game — only Alabama (47), Ohio State (45) and Florida (41) have been featured more. The Sooners are 23-13 in those games. The show is in Waco for the third time. Baylor won a 2014 game against Kansas State, and was 8-0 in 2015 before losing to Oklahoma.