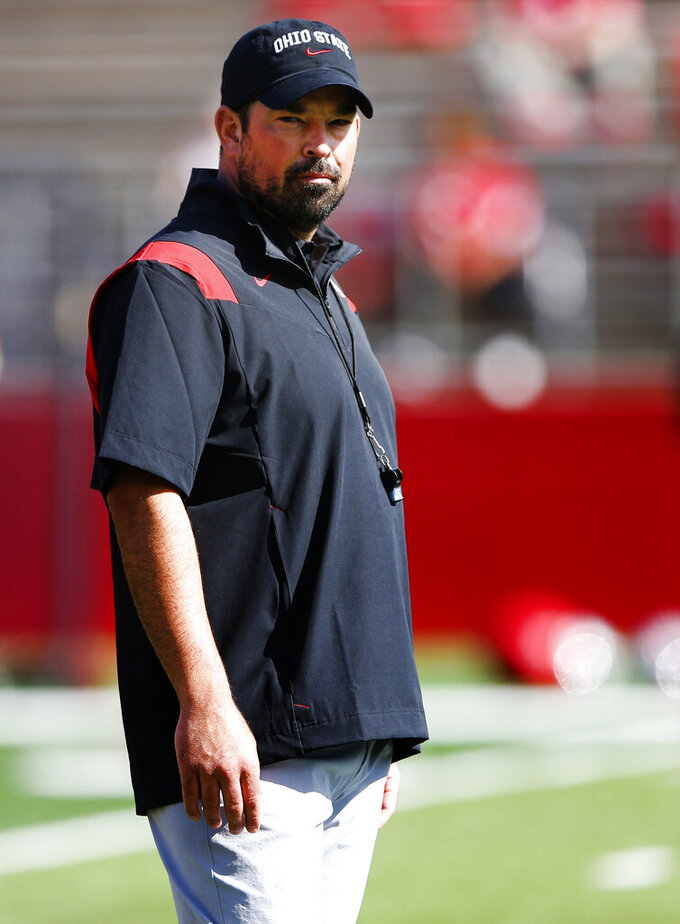 PISCATAWAY, N.J. (AP) — Greg Schiano of Rutgers has a warning for the rest of the teams in the Big Ten Conference: No. 11 Ohio State is finding its stride.

C.J. Stroud threw for 330 yards and a career-high five touchdowns after sitting out a game to rest a shoulder and the Buckeyes won their 20th straight conference game with a 52-13 victory over Rutgers on Saturday.

“We had a bad day and we had it against a team that is finding its stride,” Schiano said after suffering his worst loss since returning for a second stint with the Scarlet Knights (3-2, 0-2). “The result was there to see.”

What everyone saw was a dominant Ohio State (4-1, 2-0) put a complete performance on display, especially on offense. The nation's No. 2 offense scored on its first six possessions and had its defense deliver a pick-6.

“Having a win like this after the last month, it’s given us a little bit of juice now as we head into the next month of October," Ohio State coach Ryan Day said. "It was some tough times here, but we grew through it, we didn’t panic, and in that we might have a good team as we head into October, November.”

Stroud connected with Chris Olave on touchdown passes of 56 and 11 yards, found Garrett Wilson on a 32-yard catch-and-run, and hit tight ends Jeremy Ruckert and Mitch Rossi on scoring passes of 19 and 1 yard, respectively. The freshman, who threw four TD passes against Minnesota in the opener, finished 17 of 23 and did not throw an interception. Olave finished with five catches for a team-high 119 yards.

“This is this is what he’s capable of," Day said about Stroud. “And now he’s got to bring it through and be consistent.”

Ohio State has beaten Rutgers eight straight times. The Buckeyes outgained the Scarlet Knights 541-346, flowed through a defense that had given up just 54 points in its first four games, and intercepted Noah Vedral three times.

The Buckeyes extended the lead to 24-0 on a 23-yard field goal by Noah Ruggles and the Wilson TD catch with 2:34 left in the opening quarter.

Rutgers' only major play in the game was a 75-yard catch-and-run by Aron Cruickshank on a short pass over the middle on the next series. The distance was a career best for both players. Vedral finished 16 of 26 for 152 yards.

Cole Snyder added a 12-yard touchdown pass to Josh Youngblood with 7:40 to play to close out the scoring and close the yardage gap for the Scarlet Knights.

“Major credit to Ohio State,” Rutgers defensive end Mike Tverdov said. “They came out, they did their thing. It's a very good football team and we cannot afford to do what we did today against a team like that. Hats off to them. They came here and took care of business.”

The result was a major letdown for Rutgers following a 20-13 loss to No. 14 Michigan on the road last weekend. They played very well in that game. They didn't follow that up this week and Schiano contributed to the problem on the opening series, using a trick play on a punt that backfired, giving the Buckeyes a short field.

Ohio State has never scored fewer than 49 points against Rutgers.

Ohio State: This team can do it all, especially on offense with Stroud throwing the ball to a trio of top wideouts and Henderson running through huge holes. The defense might have played its best game this season, giving up one play early.

Rutgers: While it has made up little ground on Michigan, Michigan State, and Penn State since Schiano returned last year, it remains light years behind Ohio State in the Big Ten pecking order. The Scarlet Knights were seriously outplayed in all phases of the game, and certainly outcoached. Schiano's decision to throw a pass on fourth-and-8 from its own 46 put Rutgers in a hole it never left.

Ohio State: The Buckeyes were outstanding on both sides of the ball. Except for one long TD in the opening half, it was a near-perfect performance. If anyone loses or plays a poor game, they are back in the Top 10.

Rutgers: The Scarlet Knights were hoping to follow a strong showing in a loss against Michigan with a good game against the Buckeyes. The hope was that an upset would get them a first spot in the poll since 2012. Obviously, they have a long way to go.