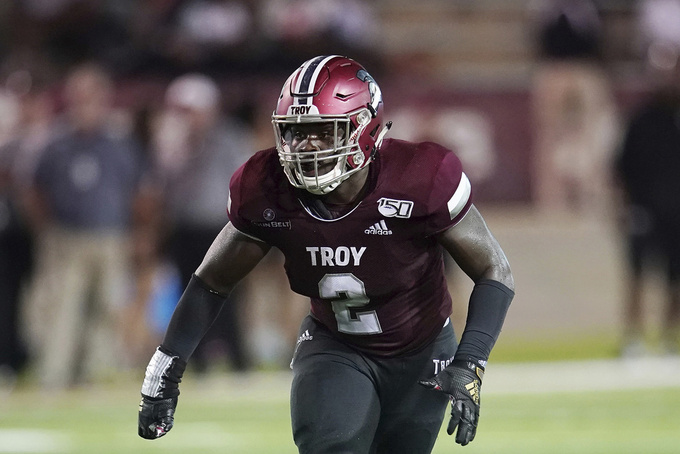 FILE - Troy linebacker Carlton Martial (2) plays during an NCAA football game in Troy, Ala., in this Saturday, Sept. 14, 2019, file photo. Martial is the preseason defensive player of the year in the Sun Belt Conference after making a nation-leading 113 tackles for a team that finished 5-6. (AP Photo/Marvin Gentry, File)

COLUMBIA, S.C. (AP) — Coastal Carolina coach Jamey Chadwell sees a new challenge for his surprising Chanticleers this fall: staying as hungry at chasing success as they were during their landmark 2020 season.

Coastal Carolina was picked last in the Sun Belt East, yet started the season 11-0, finished No. 14 in the final rankings and came up just short of playing in a New Year's Six bowl game.

And the Chants, ranked No. 22 in the preseason this year, are not alone in the AP Top 25, with Louisiana-Lafayette right behind them at No. 23. It's the first time the league has had a pair of teams in the preseason rankings.

Last year was a breakthrough for a team that played in the FCS five years ago and figured to need more seasoning before coming to the top of the Sun Belt. Instead, the Chants were a plucky and fun-loving team that grabbed national attention.

“There is more name recognition for our university and our football program than we've ever had,” Chadwell said. "There are more opportunities and that's a benefit for our student athletes.

“But the main thing we've got to focus on, the reason why the recognition's there was what we did on the field," he said. "Our players and coaches have to make sure to remember what got us there.”

Despite their best mark since elevating to the FBS, the season ended on a disappointing note.

The Chants were set to host the Sun Belt title game against Louisiana-Lafayette last December before the game was called off due to positive virus tests and contact tracing within Coastal Carolina's program.

Then the team lost a heartbreaker in the postseason, 37-34, to No. 23 Liberty (the Chants and Liberty had a December showdown called off due to COVID-19) in the Cure Bowl.

The finish left the Chants wanting more — and wanting to work even harder to achieve more success.

“People probably have a target on us and that might supply that pressure” to strive, linebacker Silas Kelly said. “In our minds, we're still picked to finish last.”

CROWDED AT THE TOP

While Coastal Carolina and Louisiana were picked to win their divisions, both coaches in the Chants' Chadwell and Ragin' Cajuns' Billy Napier see things as much more wide open. Appalachian State had won or shared four straight titles before last season and figures to pressure Coastal in the East. Louisiana will have to contend with Arkansas State in the West.

There are three new head coaches in the Sun Belt, including a a couple with very familiar names. Former Auburn coach Terry Bowden will lead Louisiana-Monroe (with Rich Rodriguez his offensive coordinator) this season while ex-Tennessee coach Butch Jones takes over at Arkansas State. Kane Wommack, the Indiana defensive coordinator the past two seasons, is coaching South Alabama.

Look for Coastal Carolina quarterback Grayson McCall to continue his stellar play from last year. McCall completed almost 69% of his throws for 2,488 yards, 26 touchdowns and only three interceptions in 250 attempts. On defense, Troy linebacker Carlton Martial was selected as the preseason defensive player of the year. Martial led the country with 113 tackles.

While Coastal and Louisiana appear set at quarterback with McCall for the Chants and Levi Lewis for the Ragin' Cajuns, there's change ahead for many other Sun Belt teams.

The Sun Belt made a big splash last season by knocking off three Big 12 schools. The league will get a chance to upset some ranked teams again this time: Louisiana is at No. 21 Texas to start the season. Appalachian State will play at No. 14 Miami while Georgia State is at No. 10 North Carolina on Sept. 18. Louisiana-Monroe plays at No. 16 LSU on Nov. 20. As far as the league goes, the East showdown should be Coastal Carolina at Appalachian State on Oct. 20. The next day, Louisiana is at Arkansas State, a game likely to decide the West.