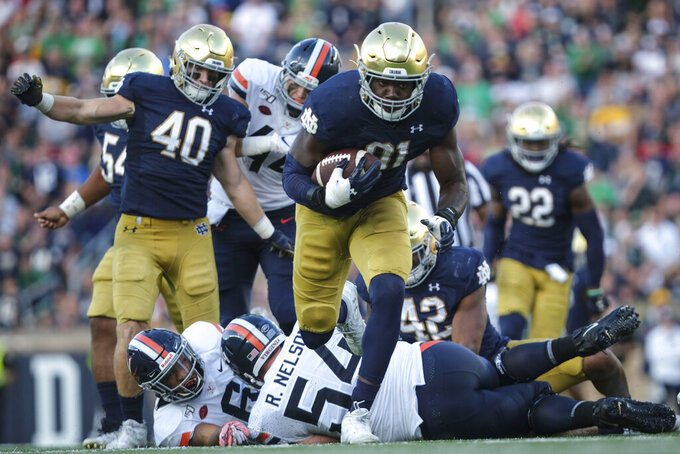 Notre Dame defensive lineman Adetokunbo Ogundeji (91) runs a fumble he recovered in for a touch down while playing Virginia in the second half of an NCAA college football game in South Bend, Ind., Saturday, Sept. 28, 2019. Notre Dame won 35-20. (AP Photo/AJ Mast)

A corrected version of the story is below:

Julian Okwara had three sacks of Notre Dame's eight sacks and caused a fumble that was returned for a touchdown as the 10th-ranked Fighting Irish overcame a halftime deficit to beat No. 18 Virginia 35-20 on Saturday

SOUTH BEND, Ind. (AP) — No. 10 Notre Dame's defensive linemen had eight sacks in a 35-20 victory over No. 18 Virginia on Saturday. And Julian Okwara thinks they can to do more.

"We're excited about the win, but we still have work to do," said the defensive end, who had three of Notre Dame's eight sacks and caused a fumble that was returned for a touchdown. "I think we just had to hone in on what coach told us to do and just do our job."

Notre Dame (3-1), coming off a 23-17 loss at No. 3 Georgia, trailed 17-14 at the break and then had the Cavaliers (4-1) complete a successful onside kick to open the second half. The Notre Dame defense held, setting the tone for the second half with five of its eight sacks in the third quarter.

Notre Dame coach Brian Kelly, who challenged his team and coaches after the loss to the Bulldogs, liked what he saw.

"They were exactly what I wanted them to be — they were determined, they were persistent," Kelly said. "We were determined to play physical in the second half. We got a big-play defense. If we can make more plays on offense, this could be a special group."

Reserve defensive end Jamir Jones started the Irish defensive onslaught in the third quarter when he sacked and stripped Virginia's Bryce Perkins of the football and defensive tackle Myron Tagovailoa-Amosa recovered it in midair before rumbling 48 yards to the Virginia 7.

"That's a d-linemen's dream right there," said the 285-pound Tagovailoa-Amosa who was tracked down by Perkins 7 yards short of the end zone. "I've got to finish the dream and get in the end zone."

Tony Jones, who had three touchdowns and a season-high 131 yards on 18 carries, scored two plays later from the 2 to give the Irish a 21-17. They never trailed again.

Later in the quarter, Okwara, who finished with two forced fumbles and fumble recovery, stripped the ball from Perkins and defensive end Adetokunbo Ogundeji recovered and ran 23 yards to put the Irish up 28-17.

"When you can pressure the quarterback with four and still play coverage, there is relatively no risk and that's what they were able to do," Virginia coach Bronco Mendenhall said.

Virginia scored first as Perkins, who completed 30 of 43 passes for 334 yards and two touchdowns with two interceptions, threw a 6-yard TD pass to Joe Reed. But the Irish answered with the next two touchdowns, a 5-yard run by Jones and an 11-yard run by C'Bo Flemister. The second TD came after Okwara stripped and recovered the football after a sack of Perkins near midfield.

Thanks to the sacks, Notre Dame held Virginia to 4 yards rushing. Notre Dame, which outgained Virginia 343 yards to 338, got 165 yards on 17-of-25 passing by Ian Book.

Virginia: The 6-foot-3, 215-pound Perkins was spectacular in the first half, with help from Reed, who finished with eight of his career-high nine receptions in the first 30 minutes. Perkins completed 18 of 22 passes (82 percent) for 235 yards and two touchdowns in the first half. He was just 12 of 21 for 99 in the second half with two interceptions as the Irish defensive front dominated.

"I just wasn't aware of the guys coming off the edges so maybe I needed to deepen my drop or feel the pressure more," Perkins said.

Notre Dame: Virginia came into the game ranking No. 1 with its 20 quarterback sacks and Notre Dame was 108th with four sacks total, none by their defensive ends. The Irish had eight sacks, 6½ by its defensive ends. Khalid Kareem had 2½ and Jones one.

"We understand the D-line is the tip of the spear," Kareem said. "Everything starts with us."

The Fighting Irish, who entered the game with eight turnovers, picked up three more against the Cavaliers and now have five interceptions and six fumble recoveries.

"Ultimately four turnovers in the second half, when you're playing a strong team on the road, that's almost in every case insurmountable," Mendenhall said.

Notre Dame did fumble the ball once as punt returner Chris Finke muffed one in the third quarter. Irish running backs have now gone 1,091 carries without losing a fumble dating back to Nov. 21, 2015.

Notre Dame reached the 900-win plateau for the second time with its victory. The Irish, who were stripped of 21 victories from the 2012 and 2013 seasons for academic misconduct, beat Miami of Ohio 52-17 for what they thought was their 900th while appealing the initial NCAA verdict that later was not reversed. With this 900th victory, Notre Dame is one of eight schools at the plateau, led by Michigan's 957.

Virginia and the Atlantic Coast Conference continued winless strings with the loss in South Bend, which received more than three inches of rain Friday and Saturday. The Cavaliers' skid of never beating a Top 10 team on the road moved to 0-27. Meanwhile, the loss made the ACC 0-for-21 playing a ranked Irish team in Notre Dame Stadium. The Irish won their 13th straight game at home.

Virginia: The Cavaliers, ranked No. 18 coming in, likely will drop after their first loss of the season.

Notre Dame: The Irish, who fell three spots to No. 10 following their loss at Georgia, should stay about there after a solid defensive effort.