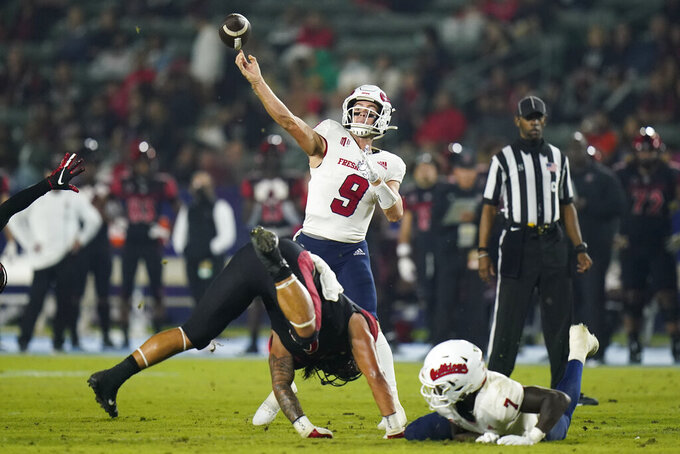 Jake Haener passed for 306 yards and a touchdown, Jordan Mims rushed for a career-high 186 yards and two scores, and the Bulldogs handed No. 21 San Diego State its first loss of the season with a 30-20 victory Saturday night.

Fresno State (7-2, 4-1 Mountain West), which knocked off then-No. 13 UCLA last month, raced out to a 20-0 second-quarter lead and dominated in all three facets.

“I feel like every week is a statement. We weren’t focused on the ranking but who we were playing,” said defensive end Kevin Atkins, who had a fumble recovery. “Our game plan was to stop the run and make them air it out. We executed our game plan better than they executed theirs.”

The Bulldogs had 485 yards of total offense, ending San Diego State's 29-game streak of holding opponents under 450. Defensively, they forced three turnovers against an Aztecs squad that had committed only six coming into the game.

“The physicality we brought off the bat set the tone. The defense did a great job of shutting down the run and we came up with some timely turnovers,” Fresno State coach Kalen DeBoer said. “We came out strong and played one of our better first quarters. The mindset we have had the last two weeks has been a confident football team.”

Haener completed 25 of 42 passes for his sixth 300-yard game this season. After Evan Williams picked off Lucas Johnson and returned it 36 yards to the San Diego State 31, Haener connected with Keric Wheatfall for a 16-yard TD just inside the left pylon 43 seconds into the second quarter to give the Bulldogs a 14-0 advantage.

Mims had his second straight 100-yard game and became the first running back this season to hit the century mark against the Aztecs. The senior had 97 yards in the first half, including a 13-yard score with 3:53 remaining in the first quarter to cap a 15-play, 86-yard drive.

Mims also had a 15-yard touchdown during the fourth quarter to extend Fresno State's lead to 30-13.

“We knew there were going to be some tough yards earned, but we could get a lot of big plays up top which is what we did,” Mims said.

San Diego State (7-1, 3-1) came into the game second in the nation in third-down percentage defense, fourth against the run and fifth in total defense, but it struggled to keep pace. Fresno State converted 9 of 18 third downs and went three-and-out only three times in 13 drives.

“I thought, honestly, we were sporadic. We were able to move the ball some and then we got stalled by one reason or another,” Aztecs coach Brady Hoke said.

Johnson had 280 yards of total offense. The senior quarterback was 14 of 31 for 220 yards, a TD and two interceptions along with 60 yards rushing. Greg Bell, who came into the game third in the Mountain West in rushing, was held to 63 yards on 15 carries.

“They came out ready to play and we came out a little flat,” Johnson said. “I've got to do a better job of taking care of the ball and putting our team in better situations.”

The Bulldogs extended their lead to 20-0 on a pair of field goals by Cesar Silva before the Aztecs got on the board late in the second quarter on Tyrell Shavers' 19-yard TD reception.

After Mims' second touchdown, Will Haskell — who replaced Johnson — had a 7-yard run to get the Aztecs within 10 points with 1:06 remaining.

San Diego State cornerback Dallas Branch appeared as if he was going to intercept Haener's long pass intended for Josh Kelly during the second quarter, but the Bulldogs' sophomore receiver was able to snag it at the last second and went 69 yards. It was Fresno State's second-longest play this season and it led to Silva's first field goal.

San Diego State's four-week stay in the rankings is likely to end with this loss. However, Fresno State could enter for the second time this season. The Bulldogs moved into the Top 25 after a victory over UCLA on Sept. 19.

“We have shown we can beat Top 25 teams. We've still got three games left in the regular season, though, and can't let up,” DeBoer said. “We’ve already had that hiccup. If we keep winning, (the ranking) will happen. I think we are a very good, well-rounded and complete team.”

Fresno State: The Bulldogs have the inside track to their fifth West Division title since 2013 and an appearance in the Mountain West championship game.

San Diego State: The Aztecs committed three turnovers after having one or none in six straight games. The two interceptions and one fumble led to 15 Fresno State points.