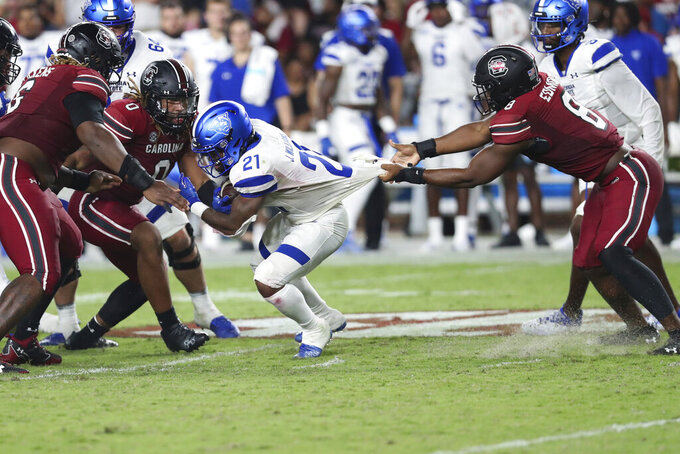 ATLANTA (AP) — When Georgia State moved into the ballpark formerly known as Turner Field, it was hoping for a day such as this.

A Power Five opponent taking the field at the Panthers' house.

North Carolina of the Atlantic Coast Conference will be in Atlanta on Saturday to face Georgia State, a school that launched its football program a dozen years ago.

The Tar Heels (2-0) are the first team from one of college football's major conferences to face the Sun Belt Conference Panthers (0-1) in their stadium.

“It's exciting for our campus,” Georgia State athletic director Charlie Cobb said. “The visibility of a school like North Carolina coming to play at Georgia State, we're excited about it and hope the weather holds. I would expect great energy in the stadium.”

A forecast that calls for a strong chance of rain around the noon kickoff could certainly dampen the occasion. But no matter what the weather brings, the Panthers hope to show they are an athletic program on the rise.

Next week, the school will officially open its new 7,300-seat basketball arena, within sight of what is now known as Center Parc Stadium.

“We're starting to put legs to the idea of what we thought this neighborhood could be and what we thought the repurposing of the stadium could do for this part of downtown,” Cobb said. “To see these plans coming to fruition is incredibly gratifying.”

Georgia State caught a huge break when the Atlanta Braves decided to leave Turner Field — about a mile from the school's downtown campus — after the 2016 season for a new ballpark in the suburbs.

Georgia State purchased the stadium and a huge swath of parking lots. Student housing already has been built and the school plans to construct a small baseball park on the footprint of the Braves' original home, Atlanta-Fulton County Stadium, best known as the spot where Hank Aaron eclipsed Babe Ruth's home run record in 1974.

Turner Field, which had a capacity of around 50,000 for baseball, was renovated into a 24,333-seat football stadium. The upper deck is tarped over and a new section of seating has been constructed across what was once right field to bring fans closer to the football action.

As soon as the Panthers moved into their new facility, which initially opened in 1996 as the main stadium for Atlanta's Centennial Olympics, they began searching for Power Five schools that might be willing to agree to a home-and-home series.

While elite programs such as Alabama and Georgia are unlikely to ever sign on to such an arrangement, North Carolina was willing to do so.

“I think it's the Atlanta market,” Cobb said. “Every school comes into Atlanta to recruit at some point ... and, as we all know, a lot of big donors and alumni groups live in metro Atlanta. It's certainly an opportunity for them to reach out to their constituents.”

Other Power Five schools have since agreed to face the Panthers in Atlanta, including Vanderbilt from the Southeastern Conference in 2024, local rival Georgia Tech from the ACC in 2026, and another ACC school, Wake Forest, in 2030.

“The stadium gives us so many unique advantages,” Cobb said.

The front end of this home-and-home series came last season, when the Tar Heels romped to a 59-17 victory in Chapel Hill.

Georgia State is 1-13 in previous games against Power Five opponents, including a 35-14 loss last weekend at South Carolina. But the Panthers still revel in their 38-30 win over Tennessee at Neyland Stadium three years ago.