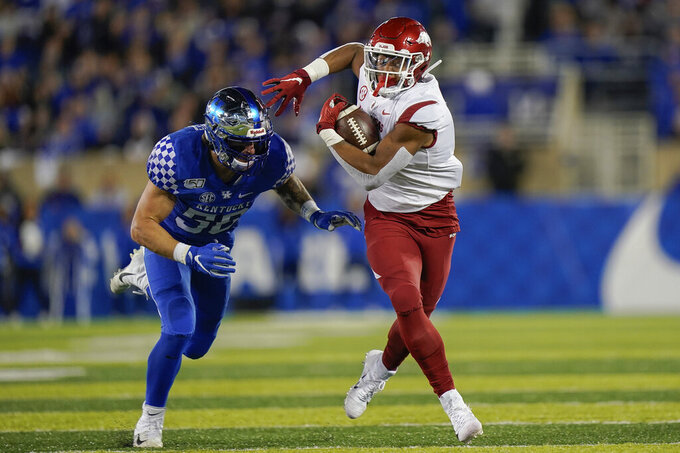 Once that personnel secret was announced, Bowden displayed almost every talent to rally the Wildcats past Arkansas.

Bowden accounted for three touchdowns in his first start at QB, including the go-ahead 24-yard scoring run with 6:53 remaining, to lead Kentucky past the Razorbacks 24-20 on Saturday night and end a three-game losing streak.

That victory came after Kentucky ended a week of speculation about whether Bowden or Sawyer Smith would start behind center. The Wildcats' top receiver took first-team snaps during the bye while the banged-up Smith recovered, but the team didn't officially announce Bowden as the starter until just before kickoff.

After settling that issue, the former high school quarterback and runner-up for Ohio Mr. Football went to work overcoming the Razorbacks.

Trailing 13-0, the junior led Kentucky (3-3, 1-3 Southeastern Conference) back from a sluggish offensive start with a 3-yard run late in the first half before eventually seizing the lead with a 10-yard TD pass to Clevan Thomas late in the third.

Bowden then directed a 75-yard drive ending with his second TD run and sealed the close victory with a 51-yard run in the final minutes. He finished with a career-best 196 yards rushing on 24 carries and completed 7 of 11 passes for 78 yards.

Bowden's yardage was second in program history behind Mike Fanuzzi, who rushed for 208 yards against Miami (Ohio) in 1974.

"So proud of Lynn, obviously, for what he's done and the way he prepared for the past couple of weeks," Kentucky coach Mark Stoops said. "But also the team, they played really good around Lynn offensively. Guys were very unselfish, they did what they had to do blocking, doing tough things on the perimeter. Just doing whatever we have to do to move the football."

The coach also elaborated about keeping Bowden's status under wraps.

"We felt like we were going to have to start him for a week or two," he said. "But Sawyer was getting better, he did practice this week. It was getting close, but we invested a lot of time in that game plan with Lynn."

It paid off as Kentucky twice overcame deficits before holding on to win before 57,060.

"I've got good playmakers around me outside of myself," Bowden said. "You just give those guys a chance and they're going to make the most of it."

Rakeem Boyd rushed for 134 yards and two touchdowns, including a 74-yard TD run on the game's second play, as Arkansas took a 13-0 lead. His 2-yard TD put the Razorbacks ahead 20-17 but they ended up losing their 14th consecutive SEC game and third close contest in a row overall.

"I didn't feel like we executed in the key moments we needed the most to get a stop, get the ball," Arkansas coach Chad Morris said. "Where we are as a program right now, we get the ball in the red zone, we've got to score touchdowns and we were unable to do that. Especially early on when he had the momentum."

Kentucky ended up converting 7 of 14 chances on the money down but only after missing several short-yardage opportunities that added urgency to its comeback. Arkansas was 6 of 13 on third down.

Arkansas: The Razorbacks got the start they needed with Boyd's TD run on the game's second play and Connor Limpert's field goals of 28 and 44 yards. The offense stalled from there, Ben Hicks replaced Nick Starkel and ended up leading a go-ahead TD drive, but the defense struggled to contain the quick and versatile Bowden.

Kentucky: After coyly avoiding answering whether Bowden would start ahead of Smith, coach Mark Stoops went with the versatile receiver. The Wildcats' execution struggled at times, but Bowden provided the needed spark.

The defense also had three sacks and made several big plays late to preserve the homecoming win.

Arkansas hosts No. 12 Auburn on Saturday.

Kentucky visits No. 3 Georgia on Saturday, seeking to end a nine-game losing streak against the Bulldogs.