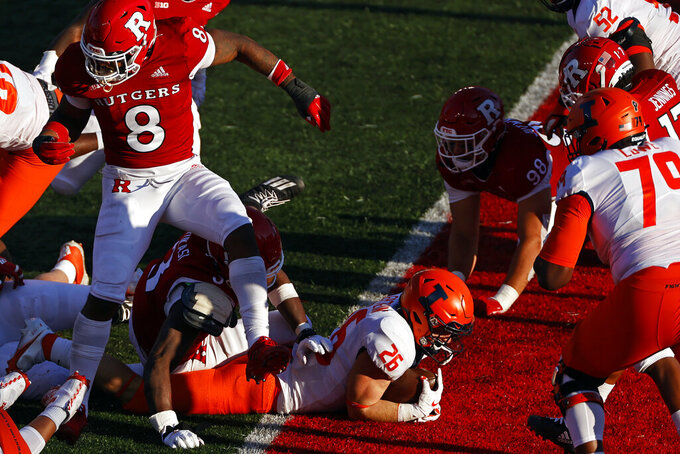 PISCATAWAY, N.J. (AP) — When it was clear the game would be coming down to his kicker, Lovie Smith had no doubt the third time would be the charm for James McCourt in the waning moments of a 10-point comeback.

McCourt overcame two long misses in the fourth quarter to hit a 47-yard field goal with three seconds left to lift Illinois past Rutgers 23-20 for the Illini’s first win of the season.

“It’s tough when you miss a couple of field goals, but we have all the confidence in the world in him,” Smith said. “We just wanted to get him that opportunity. A lot of things had to happen to get that chance, but we’ve seen him do that before. The other field goals we attempted were in range, so was the last one, so no thought at all, he’s done that before.”

Rutgers’ offense came out quick, with quarterback Noah Vedral finding Bo Melton on a 29-yard pitch and catch to cap off a six-play, 75-yard drive to make it 7-0 just 1:57 into the game.

While starting quarterback Brandon Peters was missing his third straight game following a COVID-19 test, backup Isiah Williams got the start after his quarantine ended. He was the fourth starting quarterback of the season for Illinois (1-3, 1-3 Big Ten). After having 12 players out due to COVID-19 protocols against Minnesota last week, it was just Peters, who was on the sidelines in street clothes, and redshirt freshman tight end Griffin Moore — who did not make the trip.

Rutgers’ defensive lineman Mike Teverdov stripped Williams, cornerback Max Melton recovered and the Scarlet Knights took it over on Illinois’ 29-yard line with 7:52 left in the first quarter. That set up former Rutgers soccer player Ambrosio Valentino for his first career field goal attempt, a 29-yarder, for a 10-0 lead.

Illinois answered courtesy of Williams, who had five-straight carries, and finished it off with his first score on a 3-yard touchdown run. The redshirt freshman finished with a game-high 192 yards rushing on 31 carries to overcome a 7-for-19 passing effort.

“Our run defense has actually been pretty decent up until this,” said Rutgers coach Greg Schiano, whose team gave up 338 total rushing yards. “This is option football with a very elusive option quarterback, and he did a great job. He really was electric.”

Illinois made it 13-10 with 8:59 left in the third quarter after McCourt hit his first FG attempt of the season from 29 yards.

Rutgers countered with Melton having a career-long 66-yard touchdown reception on third-and-10 for a 20-10 lead with 7:43 left in the third. It was Melton’s second two-score game of his career. He did it for the first time two weeks ago against Indiana.

Illinois responded with a six-play, 60-yard touchdown drive. Running back Mike Epstein scored on a direct snap from a yard out to make it 20-17 with 4:54 left in the third, before McCourt tied it at 20 early in the fourth quarter on a 23-yard field goal.

McCourt missed a 54-yard field goal with 7:20 left, setting up Rutgers with good field position; however, Vedral threw his second interception of the game on third-and-three, and gave Illinois the ball back on its own 26-yard line. The Illini drove to Rutgers’ 28-yard line before McCourt missed wide right from 45 yards with 3:07 remaining.

Vedral then threw his third pick with Rutgers having first-and-10 on Illinois’ 37-yard line with 67 seconds to go. McCourt finally made good with the game winner and gave Illinois its first lead of the game at 23-20.

Isaiah Pacheco had 134 yards on 20 carries to lead Rutgers, while Chase Brown added 135 yards on 17 carriers for Illinois. Vredral finished 21-of-34 for 259 yards and two touchdowns.

“I was just not good enough,” Vedral said. “I have to be more accurate.”

After a hot start, Rutgers’ offense could never really find its way, and Vedral’s interceptions proved to be costly as Illinois chipped back into the game, eventually taking the lead for the first time on a game-winning kick.

STARTING SAFETY OUT; TACKLE DOWN

Rutgers was without safety Brandon White, who was on the sidelines in street clothes. The Ohio State transfer and former Rose Bowl MVP has 21 tackles and an INT in three games. Illinois right tackle Alex Palczewski hurt his right knee on the first drive and was on crutches on the sidelines for the rest of the game.

Peters is expected back from COVID next week, though Williams is expected to be utilized as a runner for the Illini. Meantime, Rutgers coach Greg Schiano was asked if he’s thought about pulling Vedral for once-ballyhood recruit, redshirt sophomore Artur Sitkowski. While he has a strong arm, Sitkowksi has a 53% completion rate for his career, throwing five touchdowns and 20 interceptions.