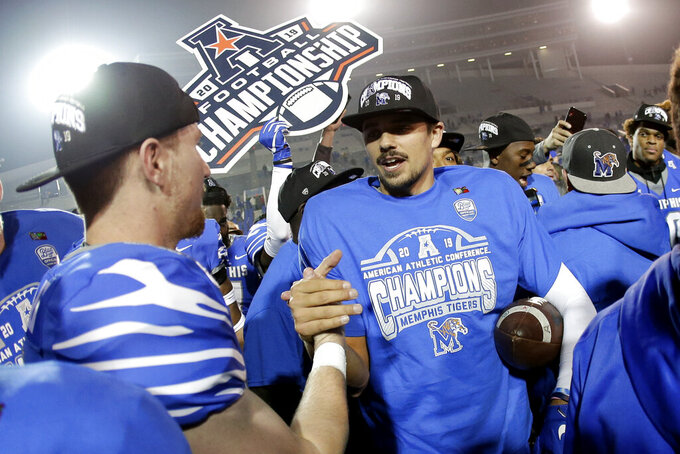 MEMPHIS, Tenn. (AP) — Memphis has hired Ryan Silverfield as the Tigers' new coach, removing the interim tag given to him Sunday when Mike Norvell left for Florida State.

“He separated himself from our national field with his preparation, his own plan for moving us forward and his unwavering passion and commitment to the Memphis football program and our community,” Veatch said. “I am confident that coach Satterfield is the right man at the right time and I'm excited to join forces with him in the pursuit of more championships.”

Silverfield had Norvell’s deputy head coach and co-offensive coordinator in Memphis’ best season yet as the No. 15 Tigers went a school-record 12-1 and won the American Athletic Conference championship last week.

Veatch did not hire a search firm.

“He identified the needs of our program, along with the characteristics and experience of the individual needed to help this program take the next big step in its remarkable trajectory,” Memphis President M. David Rudd said in a statement.

Silverfield becomes the 25th head coach in Memphis history. He will make his debut Dec. 28 in the Cotton Bowl against No. 13 Penn State.

Norvell went 38-15 in his four seasons at Memphis before being hired by Florida State. Silverfield was with Norvell and the Tigers from the start in 2016.

“Ryan is a tremendous coach, leader and inspiration to his players," Norvell said. "He was a critical component in taking the program to new heights. He’s a relentless recruiter and relationship builder and will represent the Tiger family in a first-class fashion.”

Silverfield helped coach Kevin Smith at UCF in 2007 when he led the nation with 2,567 yards rushing. Silverfield also spent six seasons coaching in the NFL with Minnesota. Three of those seasons were with the offensive line, including 2012 when Adrian Peterson ran for 2,097 yards.

Silverfield came to Memphis with Norvell in 2016 and was the offensive line coach and run game coordinator in 2018 before being promoted to deputy head coach for this season. Silverfield had only two starters back for 2019 on the offensive line, and the unit helped block for an offense that had 6,249 yards and the Tigers' third-best scoring offense with 527 points.