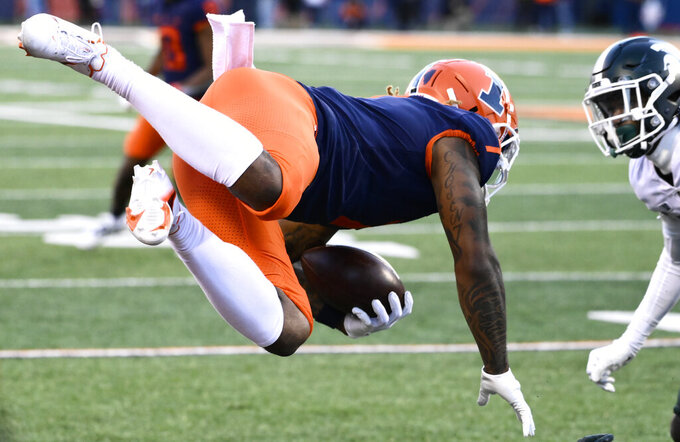 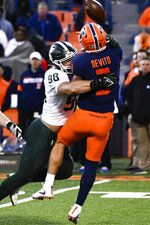 The Spartans quarterback said in the days leading to Saturday's game at No. 14 Illinois that “we're all we got” and “no one is coming to save us" after an embarrassing loss to rival Michigan and an uglier post-game fight which prompted suspensions for eight Michigan State players.

Yet, Michigan State fought through it all for perhaps its biggest win of the season as Thorne threw for 182 yards and two touchdowns in a 23-15 victory over the Illini (7=2, 4-2 Big Ten).

“I remember my dad telling me, ’There’s a lot of opportunity in adversity,'” Thorne said. "Obviously, it was a pretty adverse situation this week. We definitely had some things happen to us that you wouldn’t normally wish to happen, but we came out here and we played with the guys we had and the coaches we had and we played our butts off.”

Despite the absences, the Spartans hung tough on the road against a ranked opponent — and threw a little chaos in the Big Ten West race.

Spartans wideout Jayden Reed got loose for a 16-yard touchdown reception for a 23-7 lead with 2:57 to go and the defense did enough to halt a late comeback effort. Quarterback Tommy DeVito and the Illini (7-2, 4-2 Big Ten) stalled at the Spartans' 25 when time expired.

“Throughout the week (we were) very focused, very confident and just intentional about and deliberate about everything that we did this week in our preparation," Tucker said. "We were able to come here, play complimentary football.”

The Illini turned the ball over on downs three times in the red zone and went a combined 7 of 23 on third and fourth down attempts. Michigan State converted on its only fourth down try.

Illinois coach Bret Bielema gave the Spartans credit for responding well when they “had their backs against the wall" and lamented his team's struggles to finish drives after gaining plenty of yardage.

Down 23-7, Illinois responded with an eight-play, 56-yard drive capped by a seven-yard Isaiah Williams touchdown reception to pull within eight with 14:27 to go.

Chase Brown finished with 136 yards on 33 carries and moved into No. 3 all time on Illinois’ career rushing list.

DeVito completed 25 of 37 passes for 288 yards and two touchdowns.

Tucker lauded his group's ability to zero in on what it could control, even as Michigan State was scrutinized by national media and could still see further suspensions from the Big Ten after the team's self-imposed suspensions.

“We tell the guys every single day, ‘Block out the noise, focus on what we can control and listen to us,'” Tucker said.

Veteran defensive back Xavier Henderson had already been appreciative of punter Bryce Baringer’s skills since he transferred to Michigan State from Illinois as a walk-on in 2018.

Seeing Baringer pin the Illini back repeatedly — including once at their own 1 — despite gusting winds that reached 30 miles per hour was especially fun for the Spartans.

The Illini could have used Baringer’s services on a day when their punter, Hugh Robertson, averaged a measly 21 yards on three punts.

Michigan State: A string of defeats and a chaotic week could have torn this group apart, but the Spartans regrouped well to earn a key road win and keep their bowl hopes alive with two of three games at home to close the regular season.

Illinois: The Illini could have moved within one win of clinching the Big Ten West with a victory, but they remain in strong position as Purdue visits next week in a decisive conference tilt.

This story has been corrected to remove an erroneous reference to Michigan State snapping a three-game losing streak.