Missouri leans on transfers as opener vs La Tech approaches 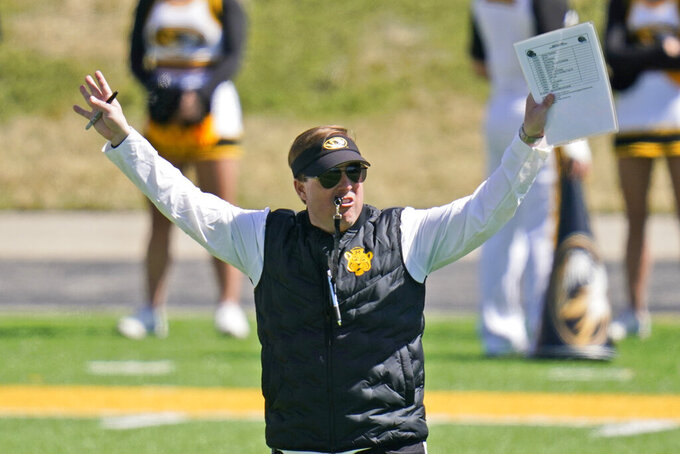 There was a time when Missouri defensive tackle Darius Robinson was the youngster alongside a bunch of veterans.

Now he's a veteran playing with ... well, a bunch of veterans.

That's because the Tigers, who were dismal on defense much of last season, heavily mined the transfer portal in an attempt to upgrade that side of the ball. Three arrivals from fellow Power Five schools are in line to start Missouri's opener against Louisiana Tech on Thursday night, and at least four more Division I transfers are on the two-deep roster as the Tigers begin what could be a crucial season for third-year coach Eli Drinkwitz.

“That's what is crazy — when I think of the old D-lines, I was the young guy with the older D-lines,” Robinson said, “and now I'm the old one and every else is old, too. They're all very mature. They know what is expected of them.”

Defensive tackle Jayden Jernigan arrived from Oklahoma State and quickly earned a starting spot. Ty'Ron Hopper came over from Florida, one of five transfers from fellow SEC schools, and will start at linebacker. Joseph Charleston won a tight battle to start at safety after his arrival from perennial title contender Clemson.

“The best conversations,” Robinson said, “are the ones where we’re hearing what they did at their old schools, bouncing ideas off each other, because at the end of the day, we’re all trying to be successful together.”

The Tigers welcomed 50 new players in the offseason, including a robust, 31-deep freshman class headlined by Luther Burden III, which many consider the nation's top wide receiver prospect. But it's the 19 transfers — 14 of them from fellow Division I schools — that will likely decide whether Missouri improves on a 6-7 record from a year ago.

At least on defense, it would be hard to get much worse.

Not once did Missouri hold an opponent to fewer than 23 points, and that includes non-conference games against Central Michigan, Southeast Missouri State and North Texas. Tennessee rolled to a 62-24 victory during a game last October.

“I always say there's no substitution for experience,” new Tigers defensive coordinator Blake Baker said. “You know, some guys this will be significant playing time for the first time; some guys, it will be their first college game ever, you know, in a packed stadium. There’s not a ton of guys on our defense like that. So, definitely gives you a sense of comfort where those guys are. You have more confidence in them just playing the scheme, not being a superhero.”

As much focus as there has been on defense, the Tigers managed to land some reinforcements on offense.

Nathaniel Peat, who led Stanford in rushing a year ago, is listed on the starting line along with returning Elijah Young and Cody Schrader, who led Division II in rushing last season before transferring from Truman State.

“I think the transfers have played a lot of college football,” Drinkwitz said. “It’ll be a different experience for them running out of Faurot Field and being in front of our fans, but once the ball is kicked I think they’ll settle in.”