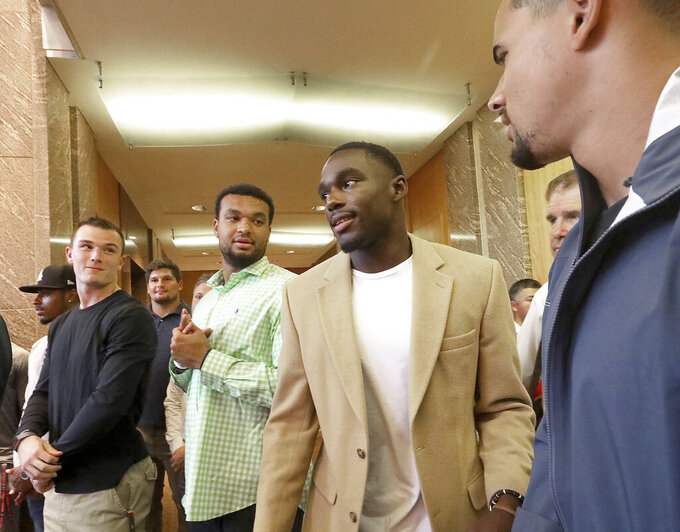 Former Wisconsin Badger football player Quintez Cephus, second from right, arrives at a press conference to reiterate his request for reinstatement to the university in Madison, Wis. Monday, Aug. 12, 2019. The former wide receiver was acquitted earlier this month of sexual assault charges stemming from a campus incident in his apartment. He was expelled from the university in March after the university's own internal investigation. A group of current team members were on hand to show support for Cephus at the event. (John Hart/Wisconsin State Journal via AP)

MADISON, Wis. (AP) — Wisconsin wide receiver Quintez Cephus was declared eligible to play Friday, a year after he was suspended in the fallout from a sexual assault allegation that resulted in his acquittal by a jury at trial.

A jury acquitted Cephus of the charges earlier this month and Chancellor Rebecca Blank allowed him to return to school. The athletic department said he wasn't eligible to play in games but didn't elaborate. Wisconsin football spokesman Brian Lucas said Friday that Cephus was ineligible because he did not fulfill the NCAA's credit requirements in the spring semester.

The NCAA granted a waiver restoring his eligibility for the 19th-ranked Badgers, who open the season Aug. 30 at South Florida.

Cephus played in 23 games for Wisconsin in 2016 and 2017, including 13 starts, hauling in 34 passes for 595 yards and six touchdowns. The Georgia native also has nine career carries for 46 rushing yards.

Cephus accumulated 501 yards receiving in the 2017 season and led the team with six touchdown catches despite breaking his right leg against Indiana and missing the final five games of the season.

Cephus returned to practice on Wednesday. Coach Paul Chryst said then that Cephus didn't get a "ton of reps" but it as "great having him out here."