No. 23 UTSA to host rival North Texas for C-USA title 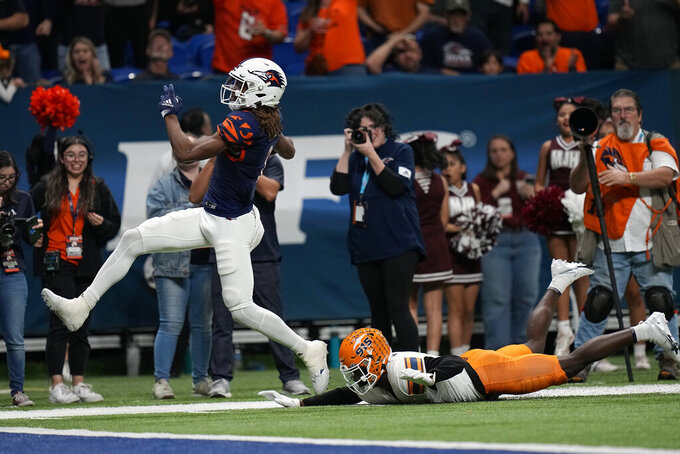 SAN ANTONIO (AP) — UTSA is nationally ranked, riding one of the nation’s longest winning streaks and enjoying the euphoria of another historic season.

No. 23 UTSA faces in-state rival North Texas in the Conference USA championship game on Friday night at the Alamodome, hoping to avoid a second straight season derailed by the Golden Eagles.

The Roadrunners are nationally ranked for the second time in program history after winning nine straight, which is tied with Troy for the fourth-longest active FBS streak.

UTSA was on a similar high last season when it came crashing down on a dreary Saturday on North Texas' home field in Denton. With chants of “overrated” raining down harder than the storm that hung over Apogee Stadium, UTSA lost 45-27 on Nov. 27, 2021.

The then 15th-ranked Roadrunners dropped out of the AP Top 25 following their season’s first loss after winning 11 straight to open the season. The lopsided loss also inflamed what has become an intense rivalry.

“Two teams that play extremely hard,” Golden Eagles coach Seth Littrell said. “A lot of these guys, they’ve either been teammates before or played against each other. Coaches knowing each other. I know the fanbases, this is always a great week for them to kind of get after each other on social media. It’s important to all.”

While this is the final game in C-USA for each team, the rivalry will continue as both are joining the American Athletic Conference next year.

UTSA bounced back from last year's loss to beat Western Kentucky in the C-USA title game at the Alamodome. The Roadrunners are hosting again, which could prove a huge advantage.

The host Roadrunners beat the Mean Green 31-27 on Oct. 22 when Frank Harris threw a 10-yard pass to De’Corian Clark with 15 seconds remaining.

The rematch is expected to draw one of the largest crowds in school history to the cavernous Alamodome.

“We’ve worked really hard to gain our city’s trust, from our mayor to everybody in the town and the city has jumped on board,” UTSA coach Jeff Traylor said. “I’d be shocked if we don’t hit 45,000 (in attendance) Friday night, and I even hope 50,000.”

More important, playing inside the Alamodome means the Roadrunners will not experience the rain that hindered their prolific passing game in last season’s loss.

The Roadrunners have continued to prosper despite a series of injuries on offense.

Redshirt freshman Kevorian Barnes, who is averaging 14.3 yards per game, is expected to start at running back. Barnes is averaging 86 yards rushing in his past six games as his carries have increased.

“We expect someone to step up and get that done,” Traylor said. “We say all the time, healthy teams don’t win championships, tough ones do. We’ve got to be tough.”

“I don’t see either team coming out and doing something that is ultra-unorthodox from what we already do,” Littrell said. “I think it’s a little bit late in the season for that. I think it’s now more a matter of going out and making sure you can execute your routine plays and got to take care of the football in these type of games.”