No. 3 Clemson looks for complete performance vs Georgia Tech 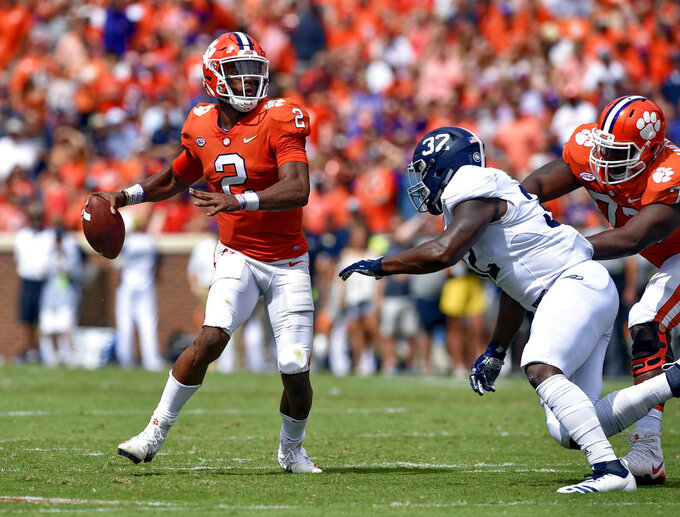 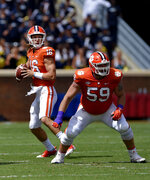 ATLANTA (AP) — No. 3 Clemson has yet to turn in a thoroughly dominating performance.

Don't blame it on the quarterback shuffle.

Both have been effective .

Bryant is a dual threat, completing 68.2 percent of his throws for 405 yards and a pair of touchdowns, while rushing for 125 yards and two scores. Lawrence, who is more inclined to sit in the pocket, has completed just under 62 percent for 424 yards with five touchdowns and one interception.

The QB combo makes things tough on a defense.

Georgia Tech has to make sure it's aware of who's on the field.

"The two quarterbacks bring different things to the game," linebacker Brant Mitchell said. "They've each got their own skill sets. One is more a runner, the other is more of a passer."

Lawrence got a taste of what it will be like to go against the Yellow Jackets' 3-4 defense in last week's 38-7 victory over Georgia Southern , which runs a similar scheme.

Lawrence is really looking forward to playing about 45 minutes from his hometown of Cartersville:

"Definitely adds an extra bit of excitement," he said. "I've got some friends and a bunch of family coming, so it's going to be cool for them to see us play."

Georgia Tech (1-2, 0-1) is on the verge of falling into a deep hole after consecutive losses to South Florida and Pittsburgh, two games the Yellow Jackets easily could've won.

Mitchell is looking forward to the challenge. Georgia Tech has pulled off some major upsets at Bobby Dodd Stadium, most notably knocking off then-No. 9 Florida State for its only ACC win in 2015 — a memorable contest that ended with the Yellow Jackets returning a blocked field goal attempt for the winning touchdown.

"A big opportunity," Mitchell said. "This team is highly ranked. Obviously, we're the underdog. I love that. I'd rather be the underdog any day."

Clemson turned over the ball three times against Georgia Southern and needed a late stop to hold off Texas A&M the week before , leaving the Tigers a bit frustrated as they try to stay on track for their fourth straight appearance in the College Football Playoff.

"If we protect the ball, we're hard to stop," said Jeff Scott, the co-offensive coordinator. "I think that's part of that frustration."

Some things to watch for when Clemson visits Georgia Tech:

Clemson appears to have a huge edge up front, with four starters on the defensive line who could all be high NFL draft picks.

Clelin Ferrell, Dexter Lawrence, Christian Wilkins and Austin Bryant figure to make things tough for Georgia Tech's triple-option, which will try to counter the Tigers' edge with plenty of cut blocking and misdirection.

"They're a very difficult system to defense," Clemson defensive coordinator Brent Venables said. "They went up and down the field all three games this year and we're doing to need a great effort."

The Tigers turned in a more balanced offensive effort against Georgia Southern, a trend they'll be looking to continue.

Travis Etienne rushed for a career-high 162 yards and the Tigers finished with more than 300 yards on the ground.

Georgia Tech leads the nation in rushing — averaging 392 yards per game — but quarterback TaQuon Marshall has struggled when going to the air. The senior has connected on just 47 percent of his passes, with four interceptions and two touchdowns.

The Yellow Jackets can't afford to leave any points on the table against a team of Clemson's caliber, which puts the burden on kicker Brenton King to step up his performance. He has made just 1 of 3 field goal attempts and missed an extra point.

Hoping for some inspiration from the past, Georgia Tech will break out an alternate uniform based on what they wore during their 1990 co-national championship season: gold helmets, blue jerseys and white pants.

The players are thrilled with the look.