No. 3 Clemson rolls out revamped offense vs No. 5 Georgia 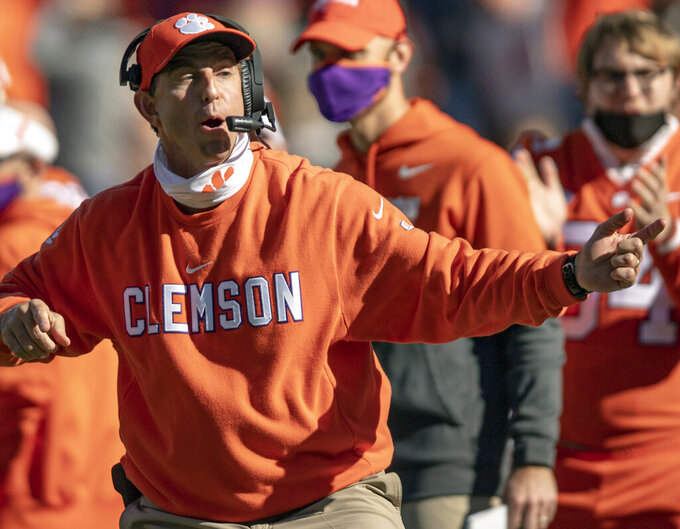 CLEMSON, S.C. (AP) — Clemson's revamped offense will get an early test when the third-ranked Tigers open the season Saturday night against No. 5 Georgia.

“We're going to know real quick what we're made of,” Tigers guard Will Putnam said Monday.

It's the first time Clemson has started the season against a ranked opponent since these same teams met in the first game of 2014, a 45-21 win by the Bulldogs that was highlighted by the college debut of heralded Clemson freshman Deshaun Watson. The quarterback would go on to help the Tigers to two Atlantic Coast Conference titles and the 2016 national championship.

Clemson's offense will have new starters at quarterback and tailback with the loss of ACC players of the year in Trevor Lawrence (won the honor in 2020) and Travis Etienne (who won in 2018 and 2019).

The Tigers are counting on talented sophomore quarterback D.J. Uiagalelei to seamlessly fill in for Lawrence, the No. 1 overall NFL draft pick of the Jacksonville Jaguars.

Things are less settled at running back, where Clemson might call on a group of eager players to take over for Etienne, who left as the ACC's career leader with 4,952 yards and 78 total touchdowns.

Offensive coordinator Tony Elliott is unsure if Lyn-J Dixon, Etienne's prime backup the past three seasons, would get the opening call in the backfield against Georgia.

“We're trying to figure that out,” Elliott said.

But it's not because of anything Dixon hasn't done, he added.

“Probably the most competitive position since the spring has been at running back so I'm excited to see how that unfolds,” Elliott said.

Behind Dixon, there are several players itching for carries, including sophomore Kobe Pace and five-star freshman Will Shipley.

Uiagalelei, when asked, said he had no idea who would get the first handoff of the season. Then again, the first carry might be from the 6-foot-4, 250-pound quarterback, who relishes running over and, sometimes, through defenders.

But Uiagalelei is anything but one dimensional: He can throw the ball well, too.

He showed that in his second college start — Lawrence was sidelined with COVID-19 for two games last season — at Notre Dame. Uiagalelei passed for 439 yards in a 47-40 overtime loss, which was a record for opposing passers against the Irish.

A week earlier, Uiagalelei led an 18-point second-half comeback for Clemson in a win over Boston College in his first career start.

Uiagalelei acknowledged things feel different this week with him in full control of the offense.

“I know coming out the gate, I'm going to start game one,” he said.

Uiagalelei and Clemson's offense will have Georgia's complete attention. Bulldogs coach Kirby Smart said having a potential College Football Playoff opponent to start the season has his team on high alert.

“All your guys come fired up and ready to play,” Smart said. “We've started on them the last couple of days and you can see the energy starting to increase.”

Elliott understands the hype surrounding a big game can some times overwhelm inexperienced players. However, he believes his group knows what's expected of them and has worked hard to live up to the standards set by previous Clemson teams.

The coach said last weekend Uiagalelei showed up at 7 a.m., three hours before practice, to watch film until it was time to work out.

“I want to be great,” Uiagalelei said flatly.

It's an attitude Elliott believes runs throughout the Tigers' offense, no matter how many snaps anyone's had in their careers.

“For our guys, internally, they understand the responsibility that they have as the next man up,” Elliott said. “They understand what the DNA and the lineage of this offense has been and it's their turn to put their mark on it.”